Taxi ads are talking about atrocities in Balochistan 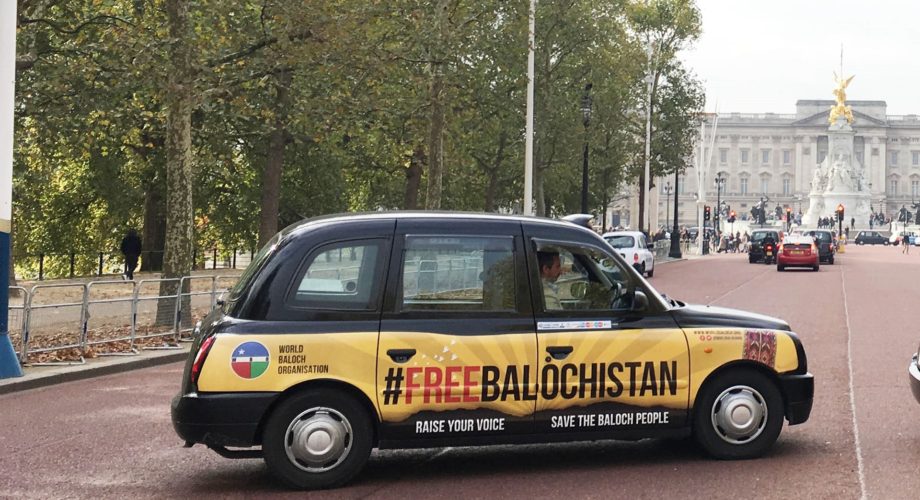 ‘Why was TfL so quick to order the adverts removed?’ The London taxi adverts from the World Baloch Organisation.

Transport for London appears to have caved in to pressure from the Pakistan government and banned London taxi advertisements that draw attention to its human rights abuses in the war-torn disputed province of Balochistan.

Islamabad denounced the advertising campaign as “malicious”, “anti-Pakistan” and an attack on the country’s “sovereignty and territorial integrity”. It has demanded the British government removes the adverts, which were emblazoned with the words “#FreeBalochistan. Raise your voice. Save the Baloch people.”

Pakistan’s high commissioner in London, Syed Ibne Abbas, requested the Foreign Office ban the adverts. The UK high commissioner to Pakistan, Thomas Drew, was summoned by the government of Pakistan and told that such adverts “should not be allowed”.

Within 24 hours, TfL ordered the adverts to be pulled, ostensibly on the grounds that they were “controversial and sensitive” in violation of clause (h) of its advertising policy. However, the advert organisers, the World Baloch Organisation (WBO), argue that most reasonable people would not regard the wording as controversial or sensitive. They note that clause (h) states that adverts promoting humanitarian-type causes will “not normally be disapproved”, even if they are controversial or sensitive.

So why was TfL so quick to order the adverts be removed? It looks like a panicked reaction to Pakistani lobbying and, possibly, to pressure from the Foreign Office, which often seems to prioritise good relations with Pakistan and ignore its many human rights violations. Undeterred, the WBO has launched phase two of the campaign: billboard adverts on London roads.

Bhawal Mengal of the WBO is one of the advert organisers. He’s exiled in the UK, fearing that if he was active in Balochistan he’d be killed by Pakistan government agents. Five of his relatives have been jailed or murdered. “The bullying tactics of Pakistan are an attack on freedom of expression,” he said. “They are a bid to censor the voice of the Baloch people and cover up war crimes by the Pakistan army in Balochistan.

“Pakistan’s aggressive reaction is an attempt to intimidate the UK government and Baloch human rights defenders. We do not believe our adverts violate TfL policies. They are not political. Our advertising has a human rights theme similar to the Amnesty International adverts in 2016 in support of the Human Rights Act, which were accepted by TfL. The call to free Balochistan is consistent with the human rights principle of the right to self-determination, which is enshrined in the UN charter. We will appeal against the ban.”

Balochistan was previously a British protectorate that was granted independence in 1947. It was forcefully annexed by Pakistan in 1948, against the people’s will, and has been militarily occupied ever since. Pakistan has consistently refused a referendum on independence. It knows it would lose the vote.

WBO activists allege that Pakistan is seeking to impose on the UK the same censorship about Balochistan that it imposes inside Pakistan. It’s iron-fisted rule is so brutal that it will not allow journalists, human rights monitors and aid agencies to enter Balochistan. These adverts are necessary to expose the crimes of Pakistani forces, they argue.

WBO human rights campaigner, Noordin Mengal, a grandson of two veteran nationalist leaders and former parliamentarians who were jailed by Islamabad, added: “The aim of our #FreeBalochistan adverts is to alert the British public, media and politicians to Pakistan’s secret, dirty war in Balochistan. This war of terror involves the indiscriminate aerial bombardment of Baloch villages, and the kidnapping, torture and assassination by Pakistan’s army and intelligence agencies of anyone who peacefully opposes the military occupation and human rights abuses.

“Tens of thousands of Baloch people have been murdered or disappeared by Pakistani security forces. The killings are happening right now and are aided indirectly by the US, which has supplied the F-16 fighter jets and Cobra attack helicopters that are being diverted and misused to attack Baloch civilians.”

TfL needs to rethink its decision. The appearance of kowtowing to a government that is committing daily atrocities is a bad look. I hope the mayor of London will intervene to get WBO’s adverts reinstated.