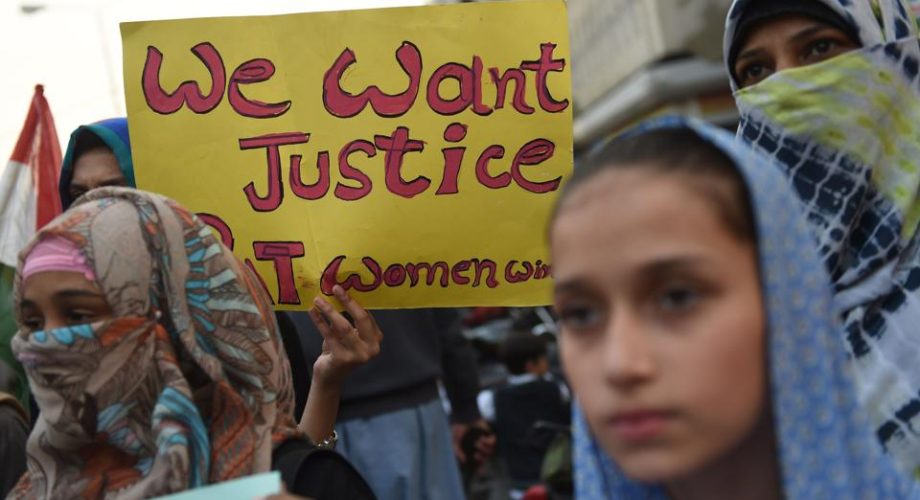 Women protest in Karachi after a seven-year-old girl was raped and murdered in Kasur town, near the border with India.

The rape and murder of a seven-year-old girl in the sleepy town of Kasur, located close to the Indian border, appears to have triggered Pakistan’s #MeToo moment, with some of the country’s top celebrities coming out to share their experiences of sexual abuse as children.

Fashion icon Freiha Altaf took to Twitter to share her ordeal. “I was sexually abused by our cook at age six,” the former supermodel wrote.

Altaf said, “My parents took action but everyone remained silent as if it was my shame. At 34, I realised how it had impacted my life. The only shame is keeping SILENT.”

Well-known television and stage actor Nadia Jamil was one of the first women to express her despair and call for justice for the seven-year-old girl, whose body was found dumped in a heap of garbage on January 9, five days after she was kidnapped.

Jamil, who faced some criticism for tweeting a photo of the mutilated body of the dead girl, also opened up about her own dreadful episodes of sexual abuse.

“I was four the first time I was abused sexually,” Jamil tweeted. “I was in college when it blew out of proportion. People tell me not to talk to respect my family’s honour. Is my family’s honour packed in my body? I am a proud, strong, loving survivor. No shame on me or my kids. Only pride for being me.”

Fashion designer Maheen Khan spoke out about her abuse by a cleric who taught her to read the Quran.

“The Maulvi who came to teach me the Quran abused me sexually. I froze in fear day after day. Share in support of children subjected to the sick acts…by so called custodians of our religion,” she said.

The public sharing of experiences of abuse by several women in deeply conservative Pakistan, where such subjects are taboo, is unprecedented. Most families dealing with such situations usually try to hush up matters to protect the “honour” of women and police complaints are rarely filed.

Many are also reluctant to speak out against clerics involved in alleged abuse, due to their larger-than-life roles in closely knit communities, especially in rural areas of Punjab and Khyber-Pakhtunkhwa provinces.

Singer Shahzad Roy, who led a protest against child sexual abuse in Karachi last week, claimed that in Pakistan, “out of every five children, one is subjected to sexual abuse”.

Roy noted that the subject is still taboo in society. “Most of the cases go unreported because there are laws for protection, and we need to spread awareness about them,” he said.

Actor Mahira Khan told the media that whenever someone tries to raise their voice on this issue, they’re asked to sit down and be quiet. “We need to understand the fact that a majority of the time, it’s someone close to the family who is the perpetrator,” she said.

She said that “the important thing is we have to start talking about it – that sexual education should form a part of our curriculum”.

No arrests have been made almost a week after the seven-year-old girl’s body was found in Kasur town of Punjab, and police now believe she was the ninth victim of a suspected serial killer aged between 25 and 30 years. Eight other girls were raped and attacked by the man over the past two years, and the only girl who survived an assault is still in hospital.

The latest rape and murder triggered outrage across Pakistan, and rallies were held in cities such as Lahore. Campaigns have been launched on social media to demand the arrest of the killer and to provide protection to young children.