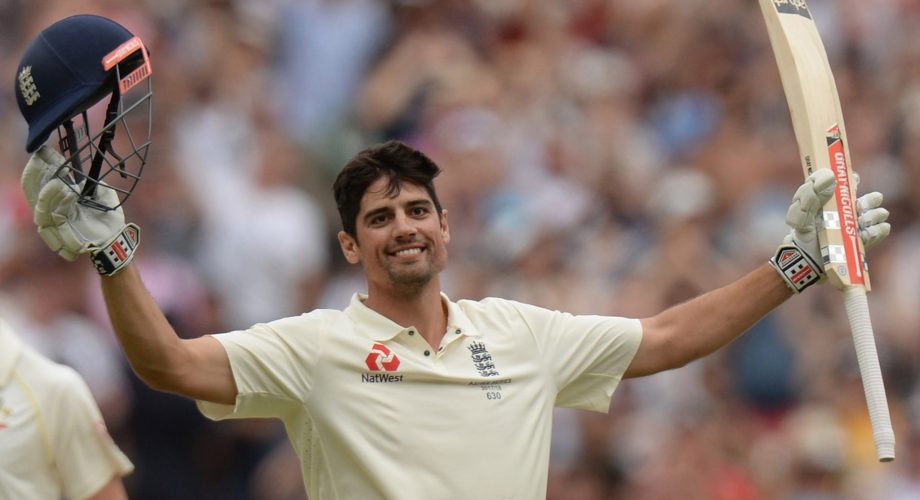 Alastair Cook celebrates reaching his double century during day three of the fourth Ashes Test at the MCG.

Alastair Cook feared his England career could be coming to an end before the masterful unbeaten double century that left Australia conceding that their hopes of inflicting another whitewash Ashes series are likely over.

The former captain’s unbeaten 244 on day three sent records tumbling as he drove Joe Root’s side to 491 for nine at the close on day three and a lead of 164 runs, surpassing two West Indies greats when outdoing the 208 made by Viv Richards in 1984 – the highest score by a tourist at the MCG – and moving ahead of Brian Lara’s career runs to reach No6 on the all-time list.

Darren Lehmann, Australia’s head coach, accepted thoughts of a 5-0 win are far from his mind – “the main goal was to win the Ashes” – and it was a case of now saving the fourth Test. Cook, who had spent more than 10-and-a-half hours at the crease and has been on the field for every minute of the three days, was simply relieved a trickle of 83 runs from six innings has ended.

“All tour I’ve been struggling with rhythm, I’ve actually been embarrassed about my performances,” said Cook, who resumed on 104 and went on to become the first England batsman to hit 150-plus 11 times in a career. “It was a kind of feeling like last-chance saloon. When you’re in those positions and you dig yourself out, it makes you proud.”

Asked if he thought he might lose his Test spot, Cook replied: “You don’t know, do you? I would have been entitled to be dropped just because I hadn’t scored a run since Edgbaston [243 against West Indies]. I always feel as though I have the backing of the selectors. But you’ve still got to deliver the goods and I hadn’t done that on this tour. It was very frustrating.

“I’ve doubted myself for 12 years. I’ll probably continue to doubt myself. The longer it goes, the harder it becomes. That’s why I’m quite proud, going to the well again and delivering a performance. It’s just a shame it’s four weeks too late [to help retain the Ashes]. I’ll have to live with that for a long time.”

On passing Lara’s tally of 11,953 runs in the process, Cook said jokingly: “I can’t really explain that. I probably feel a bit sorry for him. But it’s obviously a special moment to see your name up there.”

Cook enjoyed a 100-run stand for the ninth wicket with Stuart Broad, who made 56, and though he had dug deep on the second day, running Australia’s attack ragged late in the final session as much of the 61,839 crowd dispersed was one he was able to savour as the England supporters more than compensated in terms of noise. “I quite enjoyed listening to the Barmy Army singing their songs,” he said.

“A few times in your career you get into that bit of rhythm where time just flies. This tour, batting for half an hour has felt like two hours. But for some reason the last 10 hours have gone quickly. The England fans have been incredible the whole tour and pretty much every tour I have been on. We are so lucky with the support through thick and thin. They know the efforts we put in. They are proud of us and we are very thankful to them.”