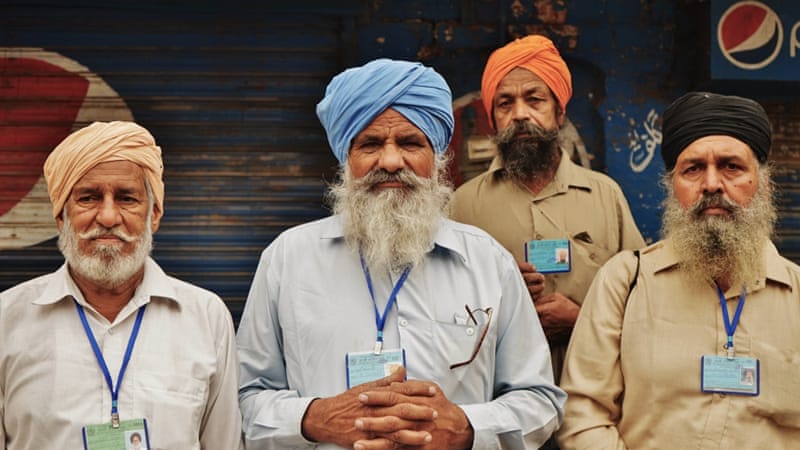 A group of Sikh pilgrims from India in Nankana Sahib commemorating the birth of Sikhism's founder, Guru Nanak.

Nankana Sahib, Pakistan – If Balwant Singh, a 73-year-old retired teacher from India, had the option seven decades ago, he would never have left Pakistan. When British India was partitioned in 1947 to create two new nations – India and Pakistan, Singh fled with his family from their ancestral home in the Punjab state that became part of Pakistan.

Now, Singh’s only way to visit the birthplace of Sikhism’s founder, Guru Nanak, is on a religious pilgrimage arranged by the Pakistani government.

Singh, however, is effusive in his praise for the Pakistani government’s upkeep and maintenance of some of Sikhism’s holiest sites. He, along with more than 2,600 other Indian yatris (pilgrims) arrived in Pakistan last week for festivities surrounding the birth of Guru Nanak, the founder and first guru of Sikhism, who was born in Rai-Bhoi-di Talwandi (now known as Nankana Sahib) in modern-day Pakistan.

In addition to their Indian counterparts from North America and Europe, the pilgrims arrived via the Wagah border between Pakistan and India on November 2.

The pilgrims will stay in the South Asian country until November 11, visiting sacred sites like Gurdwara Panja Sahib in Hasanabdal, Dera Sahib in Lahore, and Gurdwara Kartarpur Sahib in Narowal, where Guru Nanak remains buried today.

“I am more loved in Pakistan,” Singh tells Al Jazeera.

In addition to retracing the steps of Guru Nanak, Singh located the exact home he had occupied as an infant before his parents relocated to India.

To this day, when he visits the home his parents fled – now occupied by a Muslim family – he is greeted with respect, offered hospitality, and seen as one of their own, Singh says. “People want to go to the other side of the border,” Singh adds. “We are brothers with a common history.”

Pakistan is home to approximately 20,000 Sikhs, though the real figure is unknown, as the group was excluded from the most recent population census.

After the 1947 Partition of the Indian subcontinent, most of the community migrated to modern-day India, leaving behind abandoned gurdwaras, property, and businesses that were occupied, confiscated, or destroyed.

In recent years, the Pakistani government has promoted and restored historic gurdwaras, realising their commercial value as pilgrimage sites.

“We believe in the fundamental rights of all religions and we are here to support every human being that wants to come for yatra or pilgrimage to Pakistan,” says Siddiqul Farooq, Chairman of the Evacuee Trust Property Board, the government body tasked with maintaining Sikh and Hindu heritage sites.

‘Pakistan is the first home of the Sikhs’

Although Pakistan titles itself as an Islamic Republic, the country still strives to uphold warm relations with its religious minorities, Farooq adds. “There is sometimes enmity which gives birth to intolerance, and that you can’t even stop in Europe or the US,” he tells Al Jazeera.

The divided state of Punjab, splintered in two by India and Pakistan, is the cultural and spiritual home of the globe’s Sikh community. In particular, the city of Nankana Sahib offers echoes of South Asian religious syncretism.

Although majority-Muslim today, even during the festival period, Sufi Muslims, Sindhi Hindus, and Sikhs gather in front of the Gurdwara Janam Asthan to pay their respects to Guru Nanak, who was a revered figure beloved by Pakistanis of all religious stripes.

For 36-year-old pilgrim Ramandeep Kaur from New Delhi, encountering Pakistan’s Sikh population is like coming home. “Last April I came here, and I loved it so much that I returned.”

“Pakistan is the first home of the Sikhs, wherever they are in the world,” says Jasvendar Singh, a Sikh who lives in Pakistan’s Sindh province.

For Canadian Sikh Rupinder Singh Kahlon, who travelled more than 10,000 miles (approximately 16,000km) to attend the ceremonies in Nankana Sahib, the homecoming was emotional.

The 63-year-old retired mechanical technician made an effort to find his ancestors’ village, which his forebears had left in 1947.

“There was a time when my parents left this village forever on pull-carts. My parents never thought I would come back here.”

“I even gave some money to the [village] mosque.

“I’m now thinking to visit each year,” Kahlon says about the journey.

Periodically, however, festivities have been interrupted by a breakdown of relations between Pakistan and India. Earlier this year, India accused Pakistan of failing to provide pilgrimage trains for Sikh yatris, while India stopped more than 300 Sikhs from travelling to pilgrimage sites across Pakistan as tensions simmered between the two archrivals.

For the global Sikh diaspora, the allure of Pakistan’s Sikh legacy is clear, yet some point out that Pakistan’s own citizens fail to understand previous Sikh rule over modern-day Pakistan.

Sikh history is hardly mentioned in Pakistani textbooks, says Haroon Khalid, author of Walking with Nanak: Travels in his Footsteps. “Sikh rule is viewed as bad and chaotic. It’s presented in the context of ‘Sikhs destroyed Mughal heritage,'” he adds.

The government, for its part, is easing visa restrictions and promoting Sikh tourism, but has yet to update the educational curriculum to give Sikh heritage its proper credit.

Despite this, some Pakistanis are eager to revive the lost heritage of Sikhs in Pakistan.

“There is a generation of younger, more urban and globally-connected Pakistanis, who are interested in the pluralistic heritage of Pakistan,” says Jahandad Khan, the founder of tourism company Indus Heritage Club.

His company is hoping to increase domestic heritage tourism to Sikh sites, while also bringing North American and European Sikhs to Pakistan next year.

Pakistan’s international tourism potential, however, has long gone unrealised, with Pakistanis rarely marketing their non-Muslim heritage to visitors. Khan says that social media may be the most effective tool to improve the way Pakistan’s forgotten Sikh history is remembered and celebrated.

“Is Pakistan telling its story right? The biggest issue is a branding and marketing one, and there’s a lot to learn from India.”

In recent years, Pakistan has sought to make life easier for non-Muslims. It instituted a five percent job quota and reserved seats in parliament for religious minorities, allowing Christians, Hindus, and Sikhs to compete on equal footing.

“Sikhs might be a well-looked-after minority, but I would say that with some qualification,” Khalid says.

“With the renovation of gurdwaras, you see a certain empowerment of the local community. You can see their economic situation improving, but there are still issues of social discrimination,” Khalid points out, adding that Sikhs can never assume the office of president or prime minister, who are legally required to be Muslim under Pakistani law.

Despite this, Sikhs in Pakistan are hopeful about where they stand. “In Pakistan, we have freedom to carry out our religious activities,” says Inderjeet Singh, a Pakistani Sikh living in Nankana Sahib.

“We live here in freedom after Partition.”