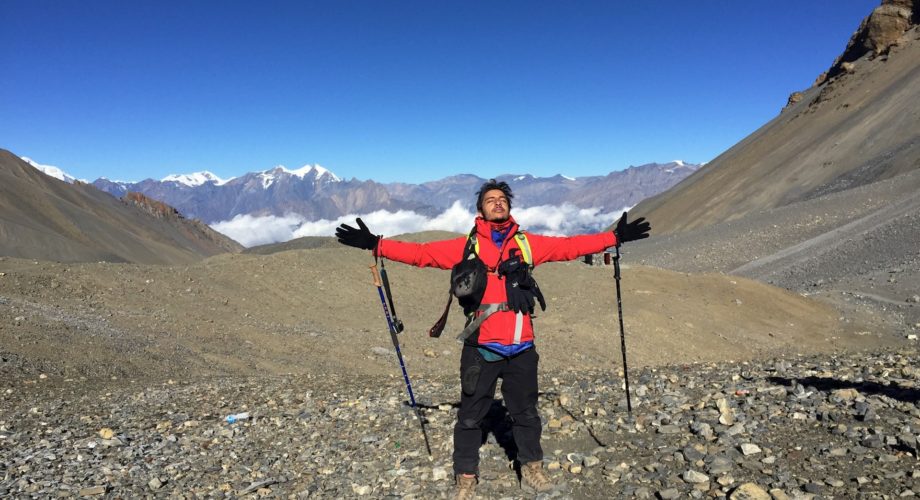 Sandeep Poudyal at Thorong La pass, the highest point on the Annapurna circuit trek in Nepal.

As Sandeep Poudyal trudged along the last stretch of the track leading to Manang, a village in the Nepalese Himalayas overlooked by the towering Annapurna range, all he could think about was the warm bed and hot food waiting in the hotel he had booked for himself and his five Nepalese friends.

But when he arrived, after trekking for nearly nine hours, he was told the hotel was fully booked. Poudyal later learned that his rooms had been given away to foreign trekkers. Two days later, it happened again in the next village on the trail.

“How is it OK for me to get kicked out of a hotel? I booked rooms and they got cancelled because ‘better’ guests came. That is not acceptable … The whole system is geared towards foreigners. As a Nepalese [tourist] I’m seen as an unwanted guest,” says Poudyal.

Trekking in Nepal is on the rise again, after a drastic fall in visitors following the 2015 earthquake. Tourist numbers have rebounded to almost pre-earthquake levels, with more than 750,000 overseas visitors in 2016, of whom almost 110,000 went trekking.

That figure is now being boosted by growing numbers of Nepalese hikers, often young and middle class, keen to explore their country’s stunning mountains. But reports are emerging of locals being kicked out of hotel rooms and bumped off flights in favour of foreigners.

These incidents peak during the autumn trekking season, which coincides with the main Nepalese holiday period, and on the most popular routes, which are already short of accommodation.

“It’s not just rooms. As Nepalese we are treated differently in every little way,” says Shreya Paudel, 27, who hiked the popular Poon Hill trek in October with a British friend. “One day we sat down in a restaurant and our guide and I were given a drink which looked dirty, while my foreign friend was given a menu. Why would they assume I would accept a filthy drink?”

The problem, Paudel believes, is that some hotel owners still see trekking as an activity exclusively for foreigners, while Nepalese travellers are assumed to be guides or porters. “The Nepalese have been trekking for a relatively short period … so [hotels] don’t see Nepalese trekkers as trekkers,” he says.

That perception is partly driven by the belief that the only big spenders are foreigners.

“When your only source of income is tourists, I’d also want customers who pay more,” says Shradha Ghale, a freelance writer and avid hiker. “Trekking in Nepal is still for foreigners or privileged Nepalese who can spend money like foreigners … For everyone else it is hit or miss.”

However, Dorje Gurung, another regular Nepalese trekker, says lodges that turn away locals are missing out. “The assumption is that Nepalese won’t pay as much as foreigners, but actually it’s the opposite. We go as a group and eat and drink a lot, whereas most western trekkers are on a shoestring budget,” he says.

That may be part of the problem. “[Trekking hotels] don’t like large groups of Nepalese because they think they will consume lots of alcohol and stay up late … It’s a matter of ambience, not outright discrimination,” says Jason Shah, who edits a website for Nepalese travellers.

“There are still some hotels who see the Nepalese as a problem [but] in the past two years the way they respond to Nepalese trekkers has improved a lot,” says Deepak Joshi, chief executive of the Nepal Tourism Board.

Pasang Sherpa, who runs a coffee shop in Namche Bazaar, a key stop on the trek to Everest Base Camp, agrees. “These stories are exaggerated. It’s all bluff … This year we have had many Nepalese guests. They don’t face any problems. We love to welcome local people.”

However, Sherpa accepts that one issue disadvantages Nepalese visitors, before they even set foot in the mountains.

Each morning during the peak season, Kathmandu’s domestic airport is packed with trekkers desperate to grab a seat on one of the tiny planes shuttling them to Lukla, the gateway to the Everest region. Seats on the first departures of the day are especially prized as later flights are routinely cancelled due to bad weather in Lukla or air traffic congestion.

But Nepalese trekkers have accused the airlines of only selling seats on the early morning flights to foreigners, who are charged £125 for a one-way ticket, almost three times the rate for locals.

Jigme Sherpa’s experience was typical. He and his four friends had waited for three days at the airport, watching the early flights packed with foreigners leave, while their later flights were cancelled day after day. “The pricing prioritises foreigners for the early flights. It’s so unfair. You are treated as a second-class citizen in your own country,” says Sherpa.

Despite the difficulties, young Nepalese trekkers like Kabita Poudel promise to continue exploring their country. “Nepal is such a great destination, but it should be equally good for Nepalese visitors. It must be Nepalese-friendly.”