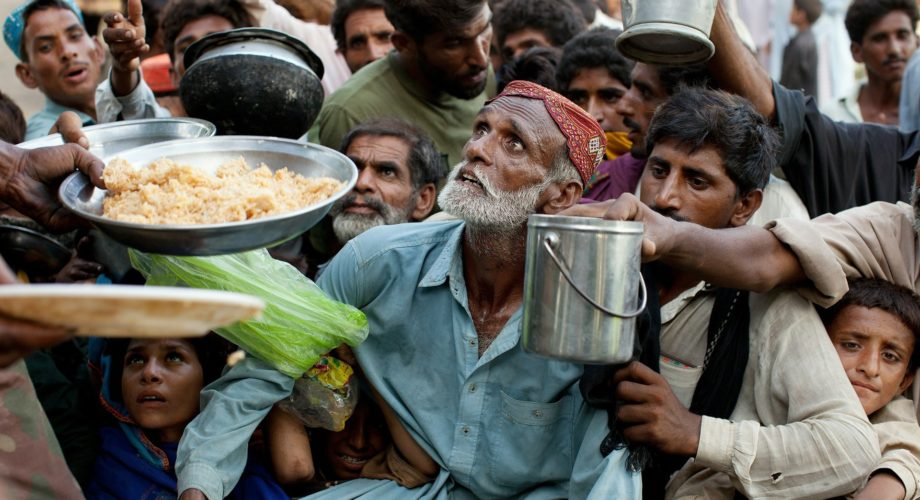 People affected by flooding in Pakistan’s Sindh province in 2010 scramble to benefit from a food distribution. Many aid organisations are now being expelled from the country.

The Pakistani government has ordered a number of foreign charities and rights groups to close down their operations and leave the country by the end of January.

Over the past few days, the interior ministry has sent letters to 29 major international non-government organisations (INGOs), including Action Aid and Marie Stopes, telling them to shut their offices and leave within 60 days.

Pakistan has toughened its stance towards local and foreign aid groups in recent years by announcing a strict registration policy for organisations to operate and raise funds in the country. The move followed numerous allegations linking charitable work to espionage and anti-government activities.

Two years ago, Pakistan shut down Save the Children’s offices in the capital, Islamabad, accusing the charity of involvement in the CIA operation to capture Osama bin Laden, the late al-Qaida leader. Last month, the last of three medical facilities run by Médecins Sans Frontières (MSF) in tribal areas bordering Afghanistan was forcibly closed down.

The latest move has triggered a scramble for clarification among international organisations in the country, according to Saba Khattak, executive director of the Open Society Foundations Pakistan office. “We obviously find what has happened both disappointing and surprising,” said Khattak.

The interior ministry spokesperson, Yasir Shakeel, said organisations that have been denied registration have the right to appeal within 90 days.

“Interior minister Ahsan Iqbal has directed that there should be no hurdles for authentic INGOs who are playing an important role in the development sector,” said Shakeel. “However, all INGOs operating in Pakistan should respect the laws of the country.”

One Action Aid official, who did not want to be named, said: “Closing down all the projects in 60 days is impossible. We want to know on what basis the government is asking us to shut down our offices.

“The issue of concern here is the employment of our hundreds of workers in Pakistan. Our organisation is serving the people of Pakistan and [is] not involved in disrespecting Pakistan.”

Mohammad Tahseen, of the Pakistan Civil Society Forum, said: “It is an illegal and a primitive way to expel INGOs from Pakistan.

“The majority of these INGOs are operating jointly with local groups and organisations and government should take us [local staff] on board about the security reasons, if there are any espionage issues. This act of government will portray a negative image of Pakistan globally.”

Brad Adams, Asia director of Human Rights Watch, also criticised the decision. He said: “The Pakistani government’s closure of international organisations without allowing these decisions to be contested shows disturbing disregard for the wellbeing of ordinary Pakistanis who benefit from them.”