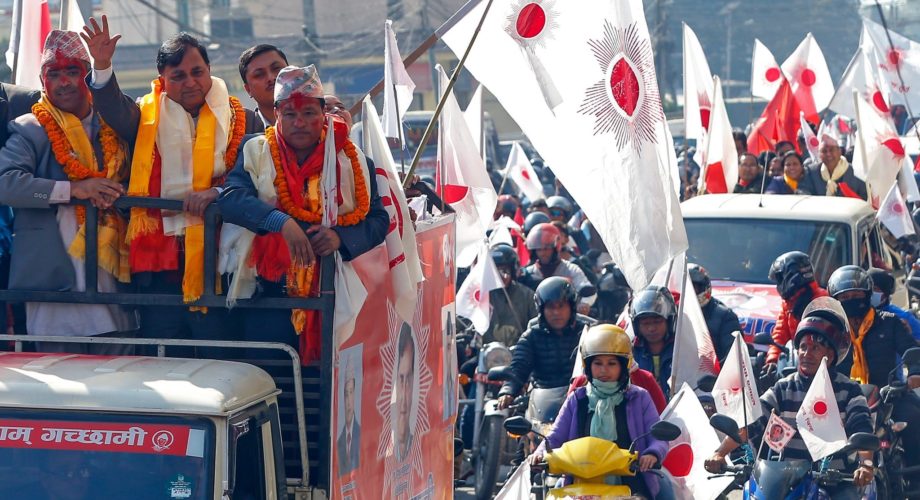 A Communist Party of Nepal rally in Kathmandu on Tuesday. Vote counting began shortly after polls closed on Dec. 7, but the results did not become clear until this week.

KATHMANDU, Nepal — Communist parties in Nepal with closer ties to neighboring China have emerged victorious in the country’s largest democratic exercise ever.

Vote counting began shortly after polls closed on Dec. 7, but the results did not become clear until this week. On Friday, a spokesman for Nepal’s election commission said his office had to tally up only a small number of votes.

The defeat of Prime Minister Sher Bahadur Deuba’s governing Nepali Congress party is likely to have significant foreign policy implications for Nepal, a landlocked country squeezed between India and China.

Mr. Deuba’s government recently oversaw the cancellation of an award granted by a Chinese company to develop a large hydropower project in Nepal. Politicians say that decisions like that could be reversed under the leadership of politicians like Mr. Oli of the Communist Party of Nepal, who took a harder line against India when he served as prime minister.

Nepal has been through turmoil in recent years. A decade-long insurgency led by Maoist rebels left more than 17,000 people dead before a 2006 peace deal ushered in democracy. In April 2015, a series of earthquakes dealt another devastating blow, killing nearly 9,000 people and destroying hundreds of thousands of homes.

When Nepal’s Constitution was finally adopted in September 2015 after long, contentious delays, ethnic groups living along the country’s southern border with India mobilized in deadly protests against provisions that they saw as discriminatory against women, indigenous communities and those from lower castes.

India also perked up. During the protests, a five-month blockade was imposed along the border, pinching off a crucial supply of medicine and construction materials flowing into Nepal. Thousands of people who had lost their homes during the earthquakes shivered in tin shacks.

Many said India had spearheaded the blockade because of its internal objections to the Constitution and as punishment for the Kathmandu political establishment’s increasingly cozy relationship with China, which has pumped millions of dollars into investment projects in Nepal.

Over the past couple of years, anti-India sentiment has compounded in pockets of Nepal, though some observers say concerns about geopolitical maneuvering by China and India are overplayed.

“If India fails to establish itself as a credible development partner of Nepal, the Chinese will surely gain in popularity,” said S. D. Muni, a fellow at the New Delhi-based Institute for Defense Studies and Analyses.

The elections this month filled more than 800 seats in Nepal’s Parliament and state assemblies, with some voters in rural areas walking for hours through mountainous Himalayan terrain to cast their ballots.

A splinter political party led by Maoist militants had threatened to derail the elections by planting land mines and targeting civilians. Thousands of police officers were dispatched to polling sites.

Voters said they were elated that the elections took place at all, expressing cautious optimism that new political leadership could offer stability to a country that has had 10 prime ministers in less than a decade.

“I hope they’ll deliver what they have promised,” said Prachandra Ram Shrestha, a 50-year-old entrepreneur.

The Nepal Communist Party, the Maoist party responsible for the attacks, had called for the elections to be dismissed and for Nepal’s parliamentary system to be replaced with a socialist one. But apart from a bombing on Nov. 29 that killed one person, voting was mostly peaceful.

Rajendra Mahato, a leader of the smaller Rastriya Janata Party Nepal, said that it was still unclear whether the newest iteration of Nepal’s government has the latitude or political will to deliver on campaign promises. Unresolved issues with the Constitution could still hold the country back, he said.