Aafia Siddiqui, whose release was demanded by a man who took hostages inside a Texas synagogue, would not condone the man’s actions, her attorney said Saturday.

The unidentified man, who took an unspecified number of people hostage inside Congregation Beth Israel in Colleyville, Texas, said he wanted Siddiqui to be released from a Texas federal prison, where she is serving an 86-year sentence after being convicted of attempting to murder U.S. soldiers.

The man was killed Saturday evening by law enforcement authorities, and the hostages were released unharmed. 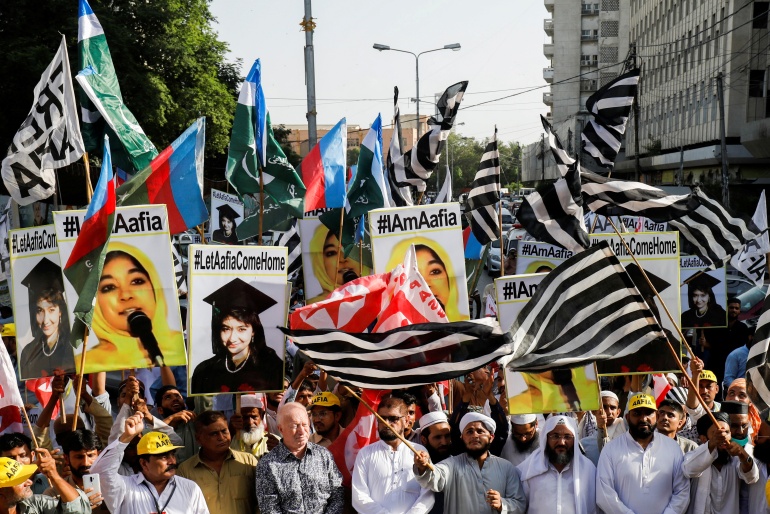 Siddiqui has long been a cause of celebration in the terrorist world.

She has sometimes been called “Lady al Qaeda,” but ISIS sought her release as well. She was convicted in 2010 of trying to murder American soldiers and officials in Afghanistan, and her sentencing included a terror enhancement.

Her release has long been sought by militant Islamists, and even mainstream U.S. Muslim groups have said she is innocent and should be freed.

According to a letter made public in 2014, the Islamic State offered to release James Foley, the American journalist who later was beheaded, in exchange for Siddiqui’s release from prison.

In 2012, according to reporting by Foreign Policy magazine, Pakistani officials offered to help secure the release of Army Sgt. Bowe Bergdahl if the U.S. would release Siddiqui.

Both offers were rejected by American officials.

The nonprofit Human Rights Watch said in a 2017 brief that Siddiqui was also the subject of a release demand by Ayman al-Zawahri, once Osama bin Laden’s No. 2 and the mastermind of many of Al Qaeda’s deadliest terror attacks.

In 2011, al-Zawahri demanded she be freed in exchange for the release of Warren Weinstein, a captured worker with the U.S. Agency for International Development, according to the agency.

In 2015, an Al Qaeda publication used her imprisonment to decry the plight of “our prisoners” at U.S. sites, including “the dungeons of the CIA,” according to Human Rights Watch.

The daughter of an English-trained, Pakistani doctor, Siddiqui attended MIT and earned a Ph.D. from Brandeis University, according to a forensic profile prepared for her criminal trial.

“While a student in Boston, Siddiqui had undertaken training and instruction on the handling and shooting of firearms,” the FBI said in a 2010 statement.

Siddiqui lived in the United States from roughly 1991 to June 2002 and returned to the country for about a week beginning on Dec. 25, 2002, federal prosecutors said.

After 9/11, Siddiqui apparently became radicalized, according to her profile, and by 2008 U.S. officials were calling her a wanted terrorist.

There have long been reports that she married the nephew of 9/11 mastermind Khalid Sheikh Mohamed, but those have not been confirmed.

In 2008, police in Afghanistan arrested Siddiqui on suspicion of trying to attack the governor of Afghanistan’s Ghazni province.

When she was captured, Siddiqui was carrying notes detailing a “mass casualty attack” on New York City sites, including the Empire State Building, the Statue of Liberty, Wall Street and the Brooklyn Bridge, according to prosecutors and court records.

Federal officials alleged she also had notes on the construction of “dirty bombs,” according to a Department of Justice statement. She was 36 at the time.

When she was brought to a “a poorly lit room partitioned by a yellow curtain” and “crowded with Afghan officials” in 2008 to be questioned by two FBI agents and at least four members of an undisclosed U.S. special forces unit, she grabbed the M-4 military rifle of a chief warrant officer and opened fire, federal prosecutors said.

The FBI said she was behind that curtain. Her gunfire missed, prosecutors said, and the chief warrant officer shot her in the stomach with his sidearm.

As the U.S. officials struggled to detain her, Siddiqui allegedly yelled, “I am going to kill all you Americans. You are going to die by my blood,” the prosecutors said.

Siddiqui was detained, given medical treatment, and flown to the United States.

She was convicted by the U.S. attorney’s office in New York City, which was led at the time by Preet Bharara, now a legal analyst for MSNBC. 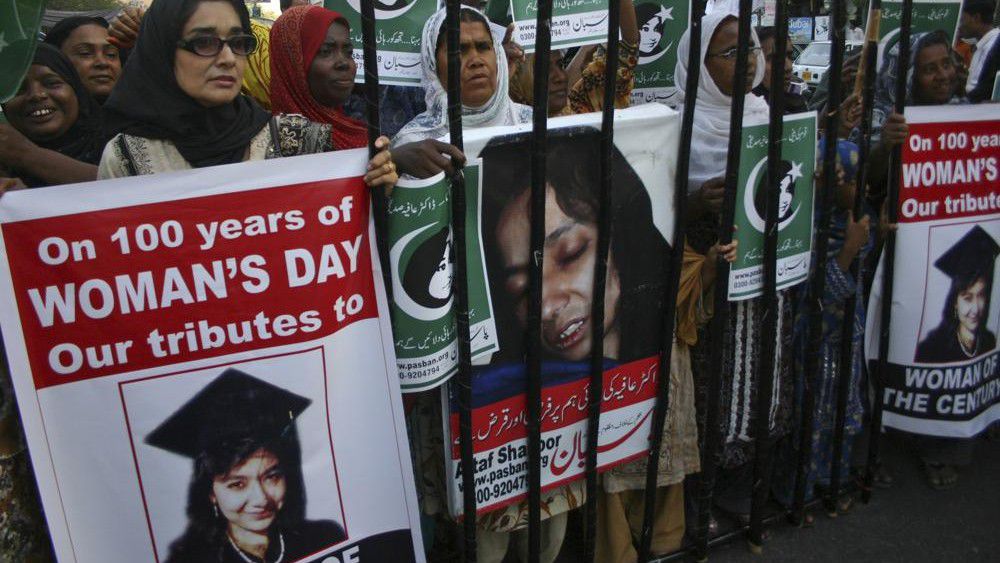 “She now faces the stiff consequences of her violent actions,” Bharara said at her sentencing.

Siddiqui is being held at FMC Carswell in Fort Worth, with a release date of May 2082, according to federal prison records.

Elbially, Siddiqui’s attorney, said she has steadfastly refuted the allegations.

“They alleged she somehow managed to disarm a U.S. soldier and somehow shoot at them. No gunshot residue, no fingerprints, no holes. Nobody was injured or hurt except her,” Elbially said.

She said Siddiqui maintains soldiers at the 2008 meeting were surprised by her presence when they entered an empty room, and that one of them yelled, “she’s loose,” and then shot her.

The Council on American-Islamic Relations, or CAIR, is among the groups that have taken up Siddiqui’s cause.

CAIR’s Dallas-Fort Worth chapter has called Siddiqui’s conviction “one of the greatest examples of injustice in U.S. history.”

It has also said she was “kidnapped, ripped apart from her children, shot at, renditioned to the U.S. and is currently serving an 86 year prison sentence for a crime she did not commit.”

Three law enforcement officials briefed on the situation said the hostage-taker referred to Siddiqui as his “sister.”

But John Floyd, board chair of CAIR Houston and longtime legal counsel for Siddiqui’s brother, said in a statement that the sibling is not responsible for the situation, is not near Dallas-Fort Worth and that the hostage-taker has nothing to do with Siddiqui.

Before the incident was defused, he called the man’s actions “wicked” and called on the hostage-taker to release the people and turn himself in.

Elbially said Siddiqui’s brother, whom she has spoken with on the phone in the past, was very unlikely to be involved and surmised that reports of the suspect referring to her as “sister” might be referring to people who are a part of the same movement.

“It didn’t even cross my mind for a minute it would be true,” Elbially said. “Her brother would not do anything like this.”