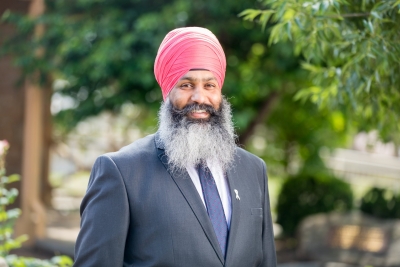 Indian-origin Sikh Amar Singh has been honoured with the New South Wales Australian of the Year award for supporting the community impacted by floods, bushfires, drought and the Covid-19 pandemic.

Singh, 41, is the founder and President of ‘Turbans 4 Australia’ — a charity organisation that assists people facing financial hardship, food insecurity, homelessness and those impacted by natural calamities.

“Our President and Founder was named NSW Local Hero this week! We are beyond proud of you Amar,” Turbans 4 Australia tweeted last week.

Singh, who was awarded in the Local Hero category, founded the charity in 2015 after experiencing racial slurs and insults because of his Sikh turban and beard, a New South Wales (NSW) government release stated.

“A co-worker once told me I looked like a terrorist. While simply going about my daily life, strangers on the street have asked me if I’m carrying a bomb, or what I’m hiding under my turban,” Singh, a strong advocate of multiculturalism and interfailth dialogue, said.

“I wanted Australians to see Sikhs as people they could trust and turn to in times of need,” he added.

Singh, who moved to Australia as a teenager, said that he has been very passionate about community service from a younger age.