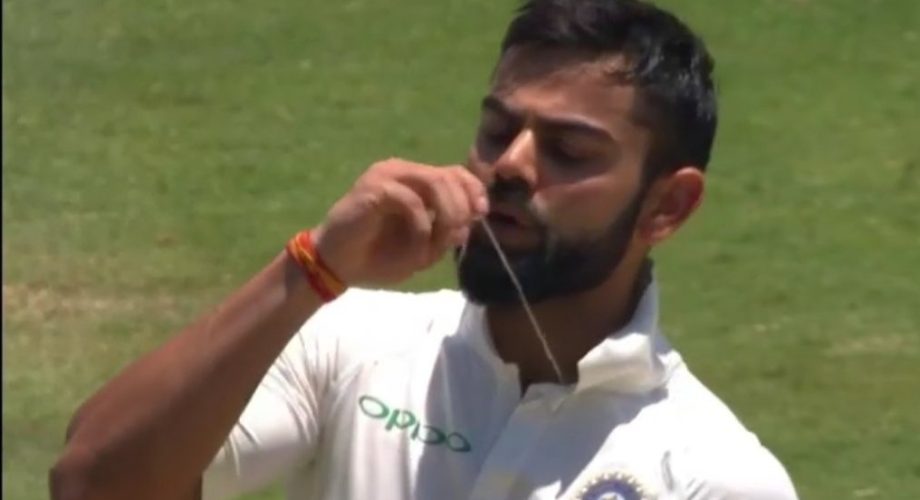 Virat Kohli kissed his wedding ring after reaching 150 against South Africa and the social media erupted.

Team Indian captain Virat Kohli led from the front with his 21st Test century to keep India in the hunt against South Africa at the SuperSport Park in Centurion on the 3rd day of the 2nd Test. Kohli scored a gritty 153 to ensure the visiting team didn’t concede a huge lead against the Proteas. What caught the eye of fans was his gesture after reaching his 150. The India skipper kissed his wedding ring after achieving the feat.

After reaching his landmark 150 in the 89th over off a Morne Morkel’s delivery. Kohli then took off his helmet and then kissed the wedding ring. The Indian captain never made a secret of his love for Anushka and was in the headlines for his high-profile marriage and the subsequent wedding receptions.

Other than Kohli, Murali Vijay and Ravichandran Ashwin were the other batsmen who chipped in with important contributions off the bat. The other Indian batsmen yet again succumbed to the hosts’ pacers.

India conceded a lead of 28 runs to South Africa. India are already 0-1 down to the hosts after their loss at Newlands in Cape Town in the first Test.