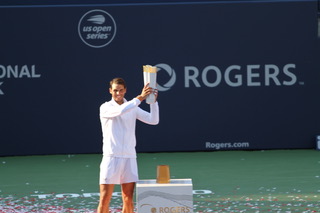 Winner all smiles at Rogers Cup 2018.

Rafael Nadal won the Rogers Cup on Sunday with a 6-2, 7-6 (4) victory over Stefanos Tsitsipas of Greece – but long before the match he had won over tennis fans in Toronto and probably a lot of its other city folk as well.

At that point the match might have been over in less than an hour but the 32-year-old from Majorca got a little nervous when he served for it at 5-4 and the 20-year-old from Athens, celebrating his birthday on Sunday, was opportunistic enough to capitalize, raise his game and send the set to a tiebreak.

Before that, leading 6-5 and having a set point, Tsitsipas could only watch helplessly as a Nadal forehand drop shot attempt tipped the top of the net and dribbled over. For the Spaniard, maybe it was just the Karma from being a good guy all week.

As it usually seems with victories by Nadal (passionate as ever in the moment of victory above) and his co-superstar Roger Federer, there were records set and new milestones achieved on Sunday. He has now won 80 titles dating back to his first in Sopot, Poland, in 2004 and he leads all ATP Masters 1000 champions with a total of 33 titles.

“It’s been 10 years without coming back to Toronto (he played once – in 2010 reaching the semi-finals) and I missed this tournament a lot,” he said during the trophy presentation. “I had too many injuries in my career to come here more often, but this week has been fantastic.”

His final words, mindful of the fact that the tournament rotates to Montreal next year, will please his fans in Toronto and all around the word. “I can just goodbye and I really hope to see you in two years.”