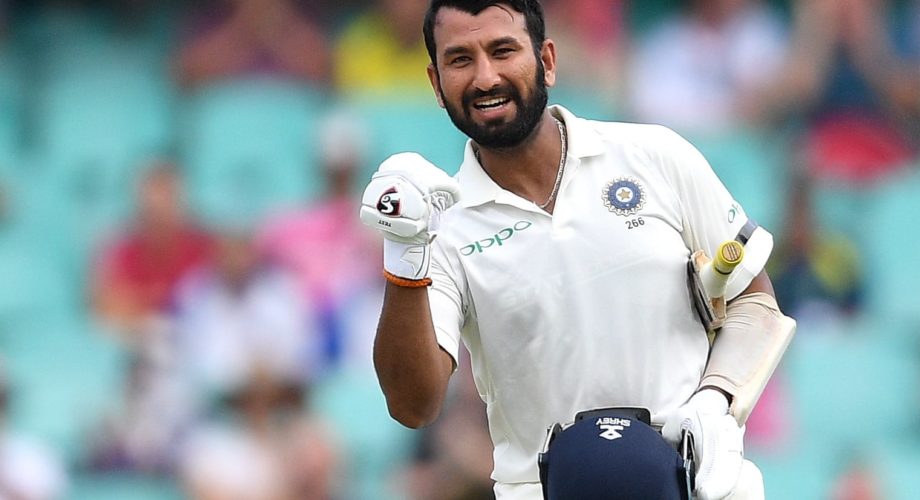 Cheteshwar Pujara celebrates after bringing up his century at the SCG.

Respect is often described as grudging, and it doesn’t get more grudging than from Australians for Cheteshwar Pujara. Yet as this Australia v India series plays out its final stanza, the admiration from the home players and supporters is real. Here’s a player who does what their own cannot: bats as long as he wants, puts distractions aside, and refuses to go away.

Australians tend to celebrate impulsiveness. We like to think we have a national style summed up by Adam Gilchrist pulverising hundreds, or Shane Warne twirling out bunnies. But with no talents like theirs in the national team, people suddenly don’t mind a more earnest approach.

Nick Benton is a fringe state player who once got South Australia home in a Sheffield Shield chase batting at No 11 with a dislocated shoulder. A flaming moustachioed redhead whose Twitter profile photo features him cheerfully smiling from a toilet seat, Benton seems a decent midpoint for a national barometer. His online tribute was a piece of modern Australian literature: “Cheteshwar Pujara. 80+ skinfolds. 8 minutes 30 for a 2km time trial (on a good day). Fields like a tree. Wears 2015 ASICS spikes. Does not give a flying fuck how boring or bad he looks. At least our blokes have good rigs and the best gear.”

If you don’t speak Australian, that’s admiration. Posted while Pujara posted 130 not out on the first day of the Sydney Test, it couldn’t be anything but. Three hundreds in four Tests this summer have drawn out such appreciation like Magnoplasm on a stubborn splinter.

For a minute in the morning Mitchell Starc looked good. He whacked Mayank Agarwal on the ankle, took both edges of KL Rahul’s bat, then beat Agarwal twice in a row. Josh Hazlewood got a nick from Rahul next over, then Starc carried on beating Agarwal.

“That’s the best over with the new ball Mitch Starc has bowled this summer,” said the former Australia opening batsman Ed Cowan on ABC radio. “The key was the length.”

Spot on: while other services lauded Starc rediscovering his early swing, the ball-tracking technology showed he was swinging it less in Sydney than in any Test in over a year, including the UAE. The threat came because 61% of his spell was full. His last innings with a similar percentage was the opening day of the most recent Ashes in Brisbane, where the air was humid, the sky overcast, and the pitch so slow that short balls were sent home chipped and neutered.

But in Sydney, after Agarwal looked uncomfortable against a couple of short balls, Starc and his captain Tim Paine decided to make a day of it. He sent down nine overs in the session, unbroken but for a change to the Randwick End. With a newish ball in the first session of a Test, this second spell was 81% short balls. Hazlewood joined in. Agarwal had some dicey moments but rode it out. At the other end, negotiating it serenely, was Pujara. When it was over India remained one wicket down.

“I’m not really sure about that, I wasn’t too happy with that to be honest,” said an unusually frank Nathan Lyon of his bowling colleagues after play. “We missed out on using the moisture in the wicket. I thought we could have stuck there longer. But the captain and the bowlers came up with a decent plan and unfortunately it didn’t work.”

It didn’t work. That sums up Australia’s series. Blasting opponents out worked in the Ashes a year ago. Not any more. The series plan would have been to keep Kohli quiet and let that take care of the rest: India’s captain has made one hundred compared to four last time he toured, but the plan hasn’t worked. About the only thing that has worked has been the bowlers: hard.

The fifth bowler didn’t help in that regard. Another plan that hasn’t worked. Labuschagne came into this Test with a first-class bowling average of nearly 50 in his career and 60 this domestic season, but was billed by his coach and captain as a leg-spinning all-rounder. His first over was pulled for three boundaries. Paine immediately dragged him from the attack.

The player pulling those half-trackers was Pujara, who cruised past his half-century and into the 60s. Only twice in his career has he scored more than a dozen runs from an over. Then he marched off for tea.

By that stage Agarwal had holed out against Lyon for 77. Virat Kohli gloved Hazlewood down the leg side just after the break. But Pujara just kept doing what Pujara does. Indian fans call him The Wall in reference to Rahul Dravid. That’s not quite right. For one, there’s a tiny gap between bat and pad that Jimmy Anderson pilots the ball through like a drone at Gatwick Airport. Australia’s bowlers haven’t been able to find it.

For another, though his trademark is obduracy, Pujara does open up once set. It’s just that getting set for him is a matter of two sessions. In the third he often came down the wicket to Lyon, tucking ones or whipping fours. His best from Starc was a cut shot from close to the body, on one foot at the point of contact, hands in tight and scything.

The cut is the closest Pujara has to a flourish. His hundred came off Starc too, suitably unmemorable off the pads through backward square. Pujara tried an air-punch to celebrate, but even there he had the sheepish demeanour of a great uncle trying to negotiate the latter half of a wedding playlist.

Not many current batsmen average 50, but their numbers just swelled by one: Pujara took his mark back over the threshold and will remain there even if he’s dismissed. “If” rather than “when”. In terms of deliveries this series he’s faced 246, 204, 103, 11, 319, 2, and now 250 and counting. He’s entirely capable of batting through another day for an Indian declaration or as last man standing. What he looks like while doing it doesn’t matter. Every shred of respect he receives this series has been earned.