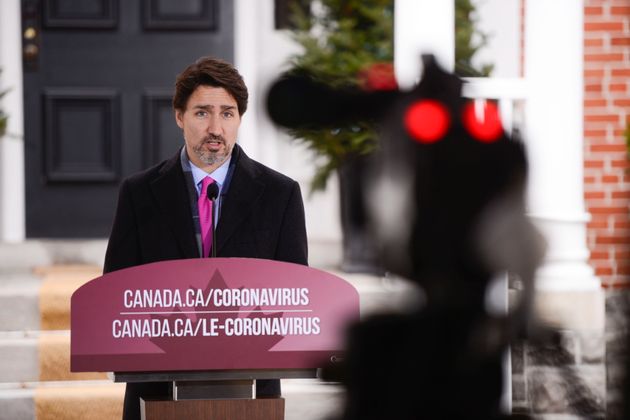 Prime Minister Justin Trudeau warned Canadians Thursday that the current social distancing and self-isolation measures may be in place for another year and half, telling the public it will have to remain vigilant for another 12 to 18 months.

“What I am saying is until there is a vaccine available, the reality of COVID-19 will still be with us,” Trudeau said, in French, during his daily press conference outside his Ottawa home. “And so for the months that that will take, and there are some estimates that say six or eight months, some say a year or a year and a half, we will have to be vigilant.”

Trudeau’s comments came shortly after the Public Health Agency of Canada released national COVID-19 modelling forecasting that under strong control measures, 4,400 to 44,000 Canadians could potentially die in the coming months.

According to the Public Health Agency, community transmission of COVID-19 started later in Canada compared to other countries, putting officials here in a position of learning what has and hasn’t worked in other jurisdictions.

“Our health care systems across the country are coping for the time being,” Trudeau said. “But we’re at a fork in the road between the best and the worst possible outcomes.”

National modelling scenarios suggest in a best-case situation, between one to 10 per cent of the population could be infected with strong social-distancing measures in place, coupled with a high number of cases identified, traced, and quarantined.

Thursday morning, the federal government confirmed there were at least 19,774, cases of COVID-19 and 461 reported deaths. Lab testing has been completed for more than 373,000 people, with five per cent confirmed positive.

“Once we go through that first wave, we want to be able to allow some economic activity to start up again, that is why there will be a graduated return to normal economic activity compared to now,” Trudeau said.

He suggested social-distancing measures would be eased but could be re-introduced if there is a resurgence of the virus in certain parts of the country. The release of national modelling projections comes after public pressure on provincial, territorial, and federal governments for increased transparency amid the COVID-19 pandemic.

The prime minister called the real-world impacts of the disease “significant and real.”

“We are unfortunately going to continue to lose people across this country in the coming weeks,” he said.

Canada’s Chief Public Health Officer, Dr. Theresa Tam, cautioned that the forecasts released Thursday are constantly being re-evaluated. After a peak period that could end by the summer, “little waves” could continue to occur for a number of months until a vaccine is discovered or the majority of the population is immune, she said.

“But we can’t go too far into the distant future in estimation, because the virus could change,” she said. “We don’t even know if you are immune today, how long that immunity will last for?”

In order to identify and isolate the virus, Tam noted that all provinces and territories are trying to beef up their lab testing capabilities.

“It’s hard to practice physical distancing and it is really hard to lose your job because of it — terrible — having said that… we all need to do this hard thing to get the best possible outcome for Canadians,” she said.

“These interventions resulted in a dramatic slowdown in economic activity and a sudden shock to the Canadian labour market,” StatCan said.