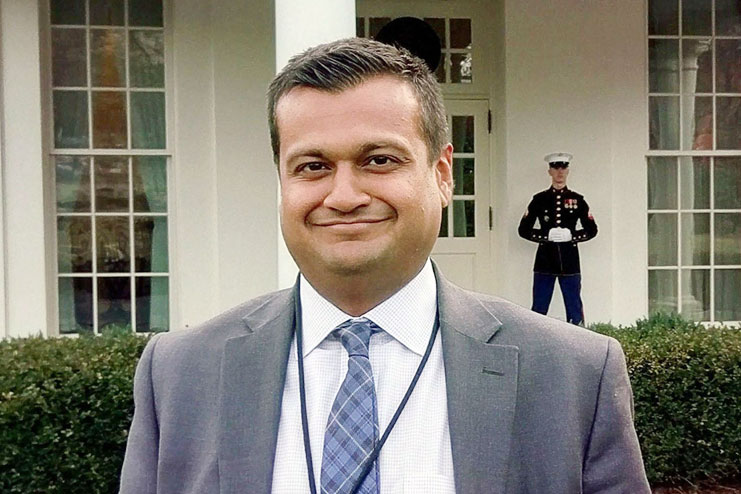 Shah, who was traveling along with Trump to Missouri, “gaggled” with the press that essentially means a press conference barring reporters from a video shoot.

In his capacity as the White House press secretary, Shah during his epoch-making press conference defended the president’s action of retweeting an anti-Muslim video that praises him for prioritizing national security through controversial travel order.

While answering questions paused by the reporters on whether the president considers Muslims as a threat to the nation, Shah said president addressed these issues with the travel order that he issued earlier this year and the companion proclamation. He added that there are other Muslim-majority countries in the world whose citizens travel to the US without restrictions.

There are plenty of Muslim-majority nations whose citizens can come to the United States without travel restrictions.

When one journalist asked him whether retweeting of the anti-Muslim video had anything to Muslims or immigrants, Shah brushed aside the question saying that the president is raising these security issues that he’s been raising for years and said he hasn’t discussed the issue with Trump.

“I think the President raised a security issue that we’ve been talking about at length. Look, we are now looking at the possibility of a difficulty in passing government funding legislation because of disagreements on immigration policy. The Democrats’ priority is amnesty. Our priority is safety and security,” Shah said to journalists.

When asked the response of British Prime Minister Teresa May denouncing the tweet, Shah said the president has the greatest respect for the British people and for Prime Minister May.

Before staring the Q&A session Shah said “We’re looking forward to the President’s remarks later today. It will be in St. Charles, talking about the need for middle-class tax relief and business tax relief.”

President Trump appointed Raj Shah, 32, as Deputy Assistant to the President and Principal Deputy Press Secretary in September. Shah had earlier served as Deputy Communications Director in the administration within a few hours after Donald Trump was sworn as the US President in January.

Before taking up White House assignments, Shah lead the Opposition Research in the Republican National Committee and played a key role in formulating the party’s anti-Clinton campaign during the days ahead of the presidential election.

Shah had also served as a research assistant during the presidency of George W. Bush. In 2008, he was also part of the campaign team of John McCain, who lost to Barack Obama.

Shah’s parents came to the US in the 1980s. He was born and brought-up in Connecticut.