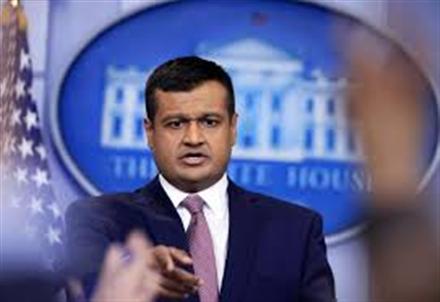 Raj Shah, the Deputy Press Secretary of President Donald Trump, has addressed a media briefing at the White House, takes questions from media.

Raj Shah, the Deputy Press Secretary of President Donald Trump, has addressed a media briefing at the White House, becoming the first Indian-American to do so.

Shah, 32, made his debut address on Thursday following the resignation of staff secretary Rob Porter over domestic abuse allegations. He was bombarded by questions on the White House advisor’s sudden exit, the US media reported.

He was filling in the shoes of White House Press Secretary Sarah Huckabee Sanders who is away on a vacation. Ahead of his briefing, Sanders took to Twitter and described Shah as “one of the best and the brightest in the Trump administration”.

Shah was asked questions about Trump’s thoughts concerning legal immigration as it affects Indian immigrants, and those applying for Green Cards through the normal route, as well as on lifting the country quotas for legal immigration, News India Times daily reported.

“We want to ensure that people coming in the country are the best and the brightest regardless of nationality, creed, religion or anything else in-between,” he added.

The press briefing came on the heels of stories revealing Shah’s scathing remarks about Trump’s candidacy in 2016 emails with his colleagues.

The New Yorker magazine earlier this week reported messages showing Shah calling the release of the infamous “Access Hollywood” tape, as “some justice”, a dig at Trump.

The tape, uncovered during the 2016 campaign, included an audio of Trump in 2005 bragging about being able to grope women due to his celebrity status.