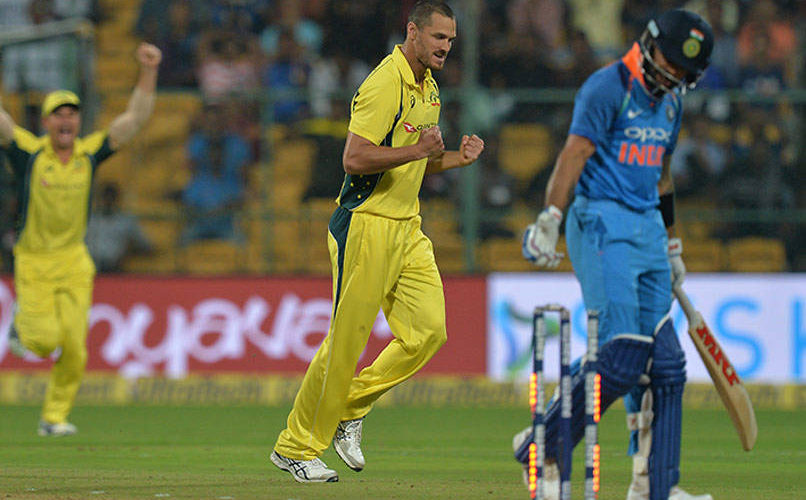 Kohli (21) got set before he played on off Nathan Coulter-Nile for the second time in the series.

Australia snapped India’s nine-match ODI winning steak on Thursday as they had a last laugh in the fourth ODI in Bengaluru beating India by a margin of 21 runs. David Warner and Aaron Finch’s 231- run stand and Peter Handscomb’s late flourish helped them score a mammoth 334 in 50 overs. Chasing a big total, Ajinkya Rahane and Rohit Sharma gave India a solid start but quick wickets of the openers and then Virat Kohli jolted the hosts’ progress. Kedar Jadhav and Hardik Pandya led the recovery and were going great guns before the latter fell for 41 at the crucial juncture. Jadhav’s wicket in the 46th over stuttered the hosts and MS Dhoni’s departure in the last ball of the 48th over was the final nail in the coffin. Australia opened their account in the series but still Virat Kohli and men lead the five-match series 3-1 with the final match being scheduled to be played on October 1.

Australia opened their account in the series but still Kohli and men lead the five-match series 3-1 with the final match being scheduled to be played on October 1 in Nagpur.

Courtesy Warner’s spectacular ton in his 100th game, Australia put up a commanding score but it was the pace troika of Pat Cummins (1/59 in 10 overs), Kane Richardson (3/58 in 10 overs) and Nathan Coulter-Nile (2/56 in 10 overs), who delivered in the slog overs to stifle the Indian batsmen.

Manish Pandey (33) and Jadhav (65) added 61 runs for the fifth wicket but both paid for their indiscretion as their dismissals in quick succession brought Australia back in the match.

Dhoni (13 off 10 balls) failed to connect majority of his deliveries, playing as many as six dot balls during the final overs, proving to be too costly.

Once again it was evident that Dhoni’s finishing powers are on the wane and he is happier playing second fiddle. Testimony to Australia’s domination at the death was that overs 47, 48, 49 and 50 produced 6, 6, 5 and 7 runs respectively.

However, India’s chase started in right earnest as Rohit and Rahane adding 106 runs in 18.2 overs.

The duo played some classy shots — especially Rohit, who hit as many as five effortless sixes compared to a boundary. Rahane at the other end dropped anchor hitting six boundaries and a six with India in cruise control mode.

In the 19th over, Rahane failed to clear Aaron Finch off Kane Richardson delivery and Rohit was unfortunately run-out — partly due to Steve Smith’s brilliance and mix-up with skipper Virat Kohli.

Kohli (21) got set before he played on off Nathan Coulter-Nile for the second time in the series as India were suddenly in a spot of bother at 147 for 3.

Man of the moment Hardik Pandya (41) was then joined by Jadhav to add 78 runs for the fourth wicket.

It was Pandya, who started to take on the bowling, especially leg-spinner Adam Zampa as he hit a boundary and three sixes.

Jadhav started slowly but then picked up pace and matched Pandya stroke for stroke.

Just when they had settled down with a nice partnership, Zampa dropped one short and Pandya was taken at long-off by Warner.

Earlier, Warner hit a splendid century in his 100th ODI as Australia put up a commanding total of 334 for 5 against India in the penultimate encounter of the five-match series, here today.

Australia were looking good for a total close to 400 but the Indian bowlers pulled back in the final 15 overs in which the visitors could manage only 103 runs.

Umesh Yadav was the pick of the bowlers despite being expensive as he had figures of 4 for 71 in 10 overs to show for his efforts.

Kedar Jadhav (1/38 in 7 overs) also did his bit to put brakes on the scoring after the openers raised visions of a mammoth total.

Warner, who have had a poor series till date, hit 12 boundaries and four sixes while Finch, who hit 10 boundaries and three sixes off 96 balls, missed out on a well-deserved hundred.

Their dismissals in quick succession did put a halt in scoring rate before Peter Handscomb’s 43 off 30 balls and Marcus Stoinis’ cameo (15 no off 9 balls) enabled them to cross the 330-run mark.

Kedar started it all by enticing Warner to go for a lofted shot which went straight to Axar Patel at long on and then next two wickets of skipper Steve Smith (3) and Finch were bagged by Yadav.

The stage was set for Australia to go after the Indian bowling, being comfortably placed at 248 for three in 40 overs but Travis Head (29 off 38 balls) struggled during the back-10 enabling India atleast curtail the Australian total by 20 runs.

Head was holed by Ajinkya Rahane at deep square leg fence off Yadav.

Handscomb was cleaned up by Yadav after he scored 43 balls off 30 balls with three boundaries and one six. Mathew Wade (3) and Stoinis remained unbeaten.

Earlier, a fluent approach by both Warner and Finch provided Australia a record first wicket partnership of 231 off 201 balls, beating the previous record of 212 scripted by Geoff Marsh and David Boon against India in Jaipur in 1986.

Their partnership was also the highest at Bengaluru, beating the previous best of 183 scored by Brad Haddin and Shane Watson against Canada in a 2011 World Cup match.