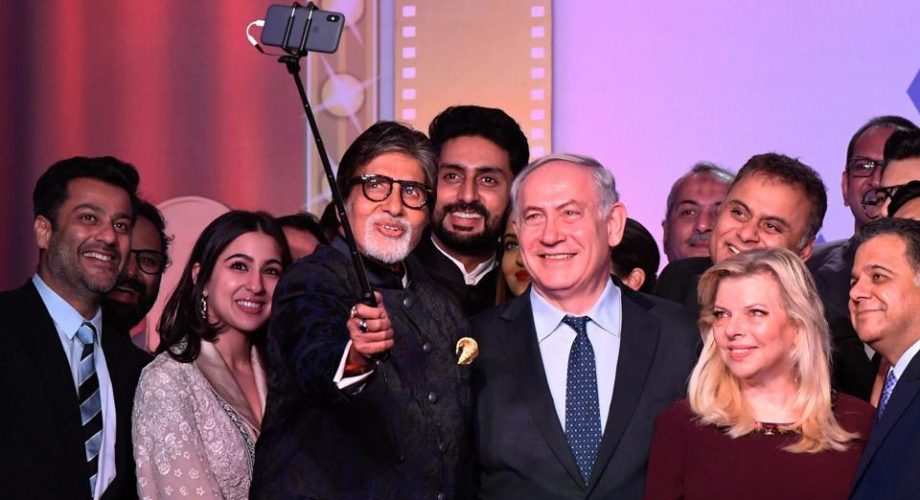 Israeli Prime Minister Benjamin Netanyahu takes a selfie with Bollywood personalities during ‘Shalom Bollywood’, an evening to celebrate Israeli and Indian Bollywood relations during his visit in Mumbai on Thursday.

“The world loves Bollywood, Israel loves Bollywood, I love Bollywood”, said Israel Prime Minister Benjamin Netanyahu as he wished “Shalom” to the Hindi film fraternity at a glittering event where he was welcomed by megastar Amitabh Bachchan.

“I found that Amitabh Bachchan has 30 million more Twitter followers than I do. I looked at other stars as well and I realised that you guys are a big thing. And the reason for that is that the world loves Bollywood, Israel loves Bollywood and I love Bollywood. We are putting our money where our mouth is,” Netanyahu said.

Fadnavis said the whole world loves Bollywood films and looks up to it.

At the event, the visiting PM showcased Israel’s natural beauty as a shooting hotspot for Bollywood, which has helped boost tourism for several exotic foreign locales over the years.

“You have seen what you find in Israel. In an hour’s drive, you have snow, the beaches, the desert, you have the salty sea, a sweet lake, great Indian food. I love Indian food, but it’s not only this. It is not only great locations,” he said.

Extending an open invitation, Netanyahu added that Israel and Bollywood “can create magic” by forging partnerships with its technology giants.

Netanyahu, who was here with his wife Sara, also shared some lighter moments as he quipped that his speech would be in Hindi.

Later, he called the Bollywood celebrities on stage for an Oscar-style encore.

“One of the most viral pictures of all time took place at the Oscars, and several celebrities including Brad Pitt took a selfie. So I want the all the Bollywood celebrities, producers and stars to join together for a selfie. Let a few hundred million people see the friendship,” he said.

The tech-savvy Amitabh stepped up with a selfie stick to capture the crowded moment with the Netanyahu couple becoming the star attraction for the evening.

He signed off the memorable “Shalom Bollywood” event with a “Jai Hind, Jai Maharashtra, Jai Israel”.