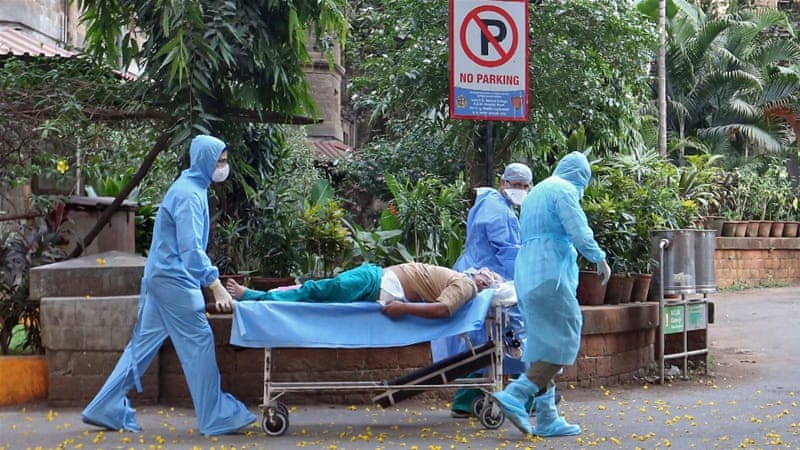 India has extended the weeks-long lockdown, but relaxed rules in areas with a lower number of cases.

More than a fifth of the country’s coronavirus cases are in Mumbai, where people struggle to find hospital beds.

When Manit Parikh’s mother tested positive for the new coronavirus, she was rushed by ambulance to Mumbai’s private Lilavati Hospital, but officials told the family no critical-care beds were available.

Five hours and dozens of phone calls later, the family found a bed for her at the private Bombay Hospital. A day later, on May 18, Parikh’s 92-year-old diabetic grandfather had breathing difficulties at home and was taken to the city’s Breach Candy Hospital, another top private facility, but there were no beds.

“My dad was pleading with them,” Parikh told Reuters. “They said they didn’t have a bed, not even a normal bed.” Later that day, they found a bed at Bombay Hospital, but his grandfather died hours later. His test results showed he was infected with the virus.

Parikh said he believes the delays contributed to his grandfather’s death. Officials at Lilavati and Bombay Hospital declined to speak with Reuters. Representatives of Breach Candy hospital did not respond to requests for comment.

For years, India’s booming private hospitals have taken some of the strain off the country’s underfunded and dilapidated public health network, but the ordeal of Parikh’s family suggests that as coronavirus cases explode in India, even private facilities are at risk of being overrun.

Government data shows the number of coronavirus cases in the world’s second-most populous country are doubling every 13 days or so, even as the government begins easing lockdown restrictions. India has reported more than 145,380 infections, including 4,167 deaths.

“The increasing trend has not gone down,” said Bhramar Mukherjee, a professor of biostatistics and epidemiology at the University of Michigan, referring to India’s cases. “We’ve not seen a flattening of the curve.”

Mukherjee’s team estimates that between 630,000 and 2.1 million people in India – out of a population of 1.3 billion – will become infected by early July.

The increasing trend has not gone down. We’ve not seen a flattening of the curve.

BHRAMAR MUKHERJEE, A PROFESSOR OF BIOSTATISTICS AND EPIDEMIOLOGY AT THE UNIVERSITY OF MICHIGAN

More than a fifth of the country’s coronavirus cases are in Mumbai, India’s financial hub and its most populous city, where the Parikhs struggled to find hospital beds for their infected family members.

India’s health ministry did not respond to a request for comment on how it will cope with the predicted rise in infections, given that most public hospitals are overcrowded at the best of times.

The federal government has said in media briefings that not all patients need hospitalisation, and it is making rapid efforts to increase the number of hospital beds and procure health gear.

The federal government’s data from last year showed there were about 714,000 hospital beds in India, up from about 540,000 in 2009. However, given India’s rising population, the number of beds per 1,000 people has grown only slightly in that time.

While millions of India’s poor rely on the public health system, especially in rural areas, private facilities account for 55 percent of hospital admissions, according to government data. The private health sector has been growing over the past two decades, especially in India’s big cities, where an expanding class of affluent Indians can afford private care.

Mumbai’s municipal authority said it had ordered public officials to take control of at least 100 private hospital beds in all 24 zones in the city of 18 million people to make more beds available for coronavirus patients.

Still, there is a waiting list. An official at a helpline run by Mumbai’s civic authorities told Reuters that patients would be notified about availability.

It is not just beds that are in short supply. On May 16, Mumbai’s municipal authority said it did not have enough staff to operate beds required for patients critically ill with COVID-19, the disease caused by the new coronavirus.

As a result, resident doctors will receive less time off than prescribed by the federal government, the authority said. Some medical professionals told Reuters they are already overburdened and treating patients without adequate protective gear, exposing them to a higher risk of infection.

Several hospitals in Mumbai, western Gujarat state, the northern city of Agra and Kolkata in the east have in recent weeks shut partially or fully for days because some medical staff were infected with the virus. The federal government has not reported any deaths of medical staff from the virus.

“In our country, healthcare has never gotten priority,” said Dr Adarsh Pratap Singh, head of the 2,500-strong resident doctors association at New Delhi’s top public hospital, the All India Institute of Medical Sciences (AIIMS). “The government is now realising the reality, but it’s already too late.”

The AIIMS group has in recent weeks protested about the lack of health gear and publicly rejected Prime Minister Narendra Modi’s call for doctors to donate part of their salaries to his coronavirus fund.

Some health experts say India’s struggle to treat coronavirus patients is the result of chronic underinvestment in healthcare. The Indian government estimates it spends only about 1.5 percent of its gross domestic product (GDP) on public health. That figure is higher than it was – about 1 percent in the 1980s and 1.3 percent five years ago – but India still ranks among the world’s lowest spenders in terms of percentage of GDP.

This year, Modi’s federal government raised its health budget by 6 percent, but that is still short of the government’s own goal of increasing public health spending to 2.5 percent of GDP by 2025, according to New Delhi-based think-tank Observer Research Foundation.

Keshav Desiraju, a former Indian health secretary, said more investment in the health system before the virus outbreak might have made the health system more resilient. “At the times of a crisis, all the holes show up,” he told Reuters.

Dr Chaitanya Patil, a senior resident doctor at King Edward Memorial government hospital, one of Mumbai’s largest, said the facility had a shortage of medical staff, and the 12 coronavirus wards catering to about 500 patients were almost full.

“There are just too many patients coming in,” said Patil, “It is lack of preparedness or a lack of insight of the people planning.”

Last week Rajesh Tope, health minister of the state of Maharashtra, which contains Mumbai, said the lack of hospital beds for critically ill patients would not last long.

“In the next two months, more than 17,000 vacant posts of doctors, nurses, technicians and other health workers will be filled,” he said in a public address.

India’s United Nurses Association, which represents 380,000 medics, took a list of 12 issues they said they are facing – including lack of protective gear and accommodation – to the Supreme Court in April. The court told them they could lodge complaints on a government helpline.

Some nurses are leaving the big cities. Earlier this month, some 300 nurses working at hospitals in the eastern city of Kolkata left for their hometowns 1,500 km (930 miles) away in India’s remote northeastern state of Manipur.

A group representing them said they had left because of irregular salaries and inadequate safety gear, among other issues.

“We love our profession,” said 24-year-old Shyamkumar, who quit his nursing job in one of Kolkata’s hospitals and is planning to head back to Manipur. “But when we are going to work, please give us proper equipment.”