When Kit met Rose: Why we love it when Cupid’s arrow flies out of the screen 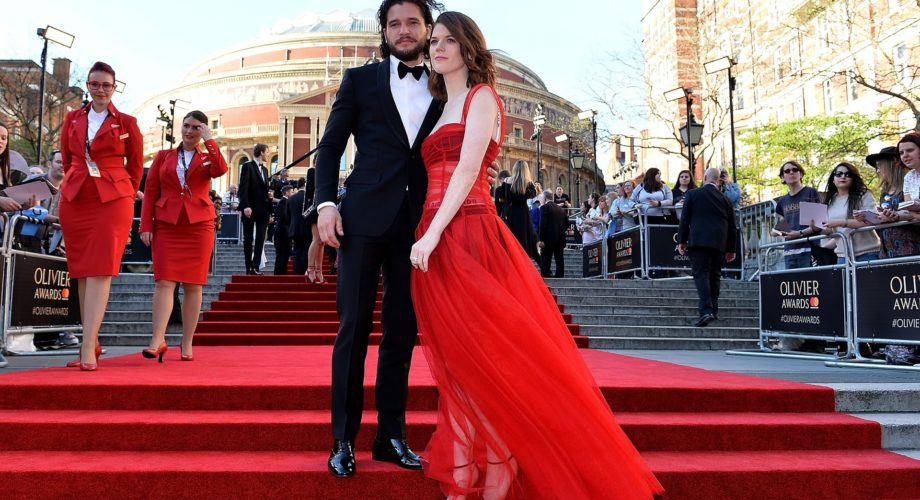 Game of Thrones actors Kit Harington and Rose Leslie have announced that they are to get married.

For those of us who inhabit that cosy little twilight zone where the boundaries between truth and fiction blur and smudge, there’s nothing nicer than when an on-screen love affair spills over into stark reality.

Stark being the operative word, as we’re talking Game of Thrones here, and Jon Snow, bastard of that particularly tough Northern dynasty, and his best Westeros girl, Ygritte. More specifically the actors who play them, Kit Harington and Rose Leslie, who it has been announced are to get married – in real, proper life.

Insert requisite spoiler warning here, but let’s hope the happy couple last longer than the four seasons their dramatis personae managed before the brutality of the scriptwriters’ red pens intervened.

Our obsession with on-screen couplings becoming romantic is evident in the amount of fan-fiction produced on the subject. It’s called “shipping” – and from Holmes and Watson to Hermione and Harry, people love to imagine what could have been. And the delight when this transfers to the real world is palpable. Wondering “what if?” is sometimes just as much fun as the fiction itself.

Perhaps the ultimate on/off-screen romance was that conducted by Humphrey Bogart and Lauren Bacall. Their first film together was Howard Hawks’s 1944 movie To Have and Have Not, and their chemistry was so powerful I wouldn’t be surprised to hear that the Manhattan Project had tried to weaponise it. The tough guy and the femme fatale was a match made, if not in heaven, at least in Hollywood’s golden age, and by the time they’d wrapped The Big Sleep the following year Bogie was divorcing his third wife and making Bacall his fourth. But where did smouldering silver-screen chemistry and real-life passion begin and end? It didn’t, according to Bogart’s biographer Jeffrey Myers, who quoted Hawks as saying: “Bogie fell in love with the character she played, so she had to keep playing it the rest of her life.”

Sexual tension is key to any long-form drama. Today everybody jumps into bed – or, like in Doctor Foster, just hoists up their skirt and bends over the kitchen island – at the drop of a hat. Back in the 1980s, things were much more spun out. Take Moonlighting, for instance. Imagine Bogie and Bacall in sports jackets rolled up to the elbows and dresses with shoulder pads, and you might have (if you squint) Bruce Willis and Cybill Shepherd as private eyes David Addison and Maddie Hayes. People were burning for them to get together. And then, in the third season, they did. Ratings fell faster than a thug thrown off a skyscraper in Die Hard, and the show slouched through lifeless fourth and fifth series towards cancellation. Reality can never match the imagination …

Perhaps that audience desire fulfilled could be called the “big bang theory” … we want it to happen; and when it does, we wish it hadn’t. And while we’re at it, we can look at the sitcom of the same name. This promulgated the fondly held dream that for every comic-collecting geek with a drawer full of Star Trek underpants there was a hot blonde woman who would only take two seasons’ worth of relentless pursuit to admit defeat and have sex with them. Actors Kaley Cuoco and Johnny Galecki actually had a two-year real-life relationship during the early years of the show, which they managed to keep a pretty good secret. Then it ended. And now in the show they’re married. I think that’s a win, on balance.

Which TV romance took six years and all of nine minutes of airtime to play out? The Nescafe Gold Blend ads of course, featuring Anthony Head and Sharon Maughan as the ultimate slow-burn couple who took 12 45-second ads dancing around each other over a cup of instant coffee before they took the plunge. It was a proper courtship, the sort of thing that people did before they invented Tinder, and it didn’t even involve buying expensive meals or, come to that, expensive coffee. It even made the front page of the Sun when their characters confessed their love for each other. They never got it on in real life, though. However, didn’t Maughan’s real-life husband, Trevor “Eddie Shoestring” Eve, appear in the ads as Maughan’s ex-husband? And Anthony and Sharon’s character names? Tony and Sharon. I don’t even know what’s real any more.

Weirdly, I’ve never thought that Sherlock Holmes and John Watson should have got together before the parts were played by Benedict Cumberbatch and Martin Freeman. I’m sure there’s slash fiction out there where people have Basil Rathbone and Nigel Bruce getting elementary with it, but I’m not going into the recesses of the dark web to find it. Cumberbatch and Freeman, though … the often spiky, tense relationship between hyperintelligent yet socially awkward Holmes and pragmatic, dour Watson is screaming for a good bedroom scene. You can even see them together in real life. “Benedict, will you wear the Doctor Strange cape tonight …?” “Only if you say, ‘What has it got in its pocketses?’, Martin.” Enough.

And one that nightmares are made of …

Just to show that there’s always an exception that proves the rule, let’s talk very briefly about the Krankies. When I was a kid I totally thought that Ian was Wee Jimmy Krankie’s dad. I couldn’t work out why an old guy would be hanging around a schoolboy if he wasn’t his dad. Though Jimmy always called him Ian, not Dad. Then I found out that Wee Jimmy Krankie was actually an adult woman called Janette Tough. Then I found out that Jeanette and Ian were married in real life. To be honest, I’m still processing this one.