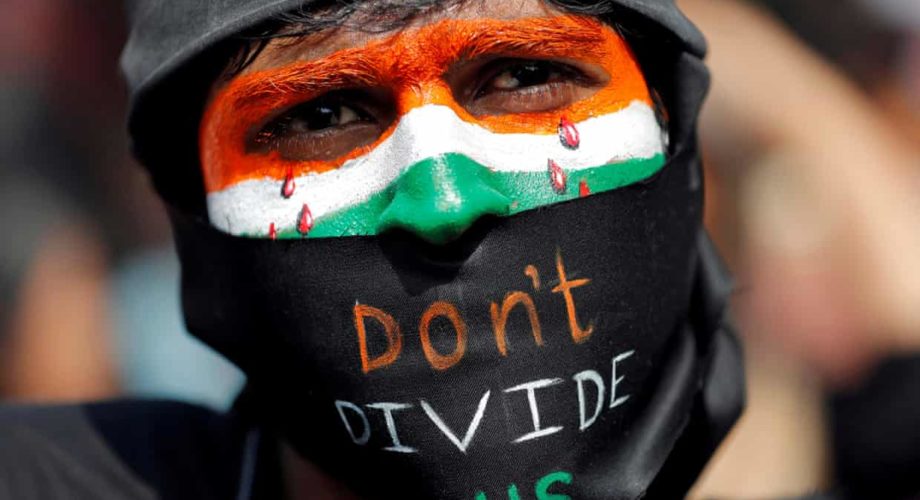 A demonstrator protesting against the February riots, in which 53 people died and thousands of Muslim families were left destitute, victims of Hindu mobs

Delhi police have been accused of slapping two Muslim student activists with “bogus” charges of conspiring to incite the recent riots, the worst religious violence in India’s capital for decades, and in which the police were accused of being complicit.

Meeran Haider and Safoora Zargar, students at Delhi’s Muslim-majority Jamia Millia Islamia University, were charged under the Unlawful Activities Prevention Act, which is usually reserved for terrorist activity and means they can be held for six months.

The charges related to an alleged “premeditated conspiracy” to stir up communal hatred through a series of speeches, which police say led to the deadly religious riots in Delhi. The students, who were taken into custody on 1 April, have also been charged with sedition, murder, possession of arms, incitement of violence, attempt to murder, and promoting enmity between different groups on grounds of religion and rioting.

Six others were arrested connected to the same charges in early April but were released on bail.

According to the police report, officers collected firearms, petrol bombs, acid bottles and stones from the students’ homes. Lawyers representing the men say they have seen no evidence or documentation.

The riots, which raged through the streets of north-east Delhi in late February, resulted in homes burned and destroyed, thousands of people injured, and at least 52 deaths. Hindu and Muslim groups clashed in the capital but, primarily, Muslims were the victims of violent Hindu mobs. Thousands of Muslim families were left homeless and destitute and three-quarters of those killed were Muslim.

The riots are widely acknowledged to have been sparked by incendiary comments made by Kapil Mishra, a leader from the ruling Hindu nationalist Bharatiya Janata party (BJP), about Muslims peacefully protesting against a controversial new citizenship law. Video evidence and witness accounts pointed to police allowing Hindu mobs to roam the streets freely to target the Muslim community.

The police investigation into the causes of the violence has, however, focused on the Muslim and student activist community, particularly those who had been previously known to the police for involvement in mass student protests against the Citizenship Amendment Act (CAA) in December. Police entered the Jamia Millia University campus in December, beating activists and detaining students.

Akram Khan, the lawyer representing Haider, a PhD student at Jamia Millia University, said: “There is no evidence to substantiate these allegations or even to connect my client to these riots at all. He was not even present. He was participating in the peaceful protests against CAA at Jamia Milia University so he was known to the police, but that’s all. But we still have not even been given the full charge sheet and I have seen no evidence.”

Umar Khalid, a former Jawaharlal Nehru University (JNU) student leader, who was among those leading the anti-CAA protests in December, has also been named on the police report on the alleged conspiracy to cause riots, but has not been arrested.

The Jamia Coordination Committee, a student and alumni group, also condemned the arrests. “The country is facing a massive health crisis. However, the state machinery is busy harassing and framing student activists in false cases to suppress voices of dissent,” it said.

The total number of arrests made in connection with the Delhi riots remains unclear, with official figures ranging wildly from around 50 to over 3,000.

Delhi police said in a statement: “All the arrests made have been based on analysis of scientific and forensic evidence, including video footage, technical and other footprints.”