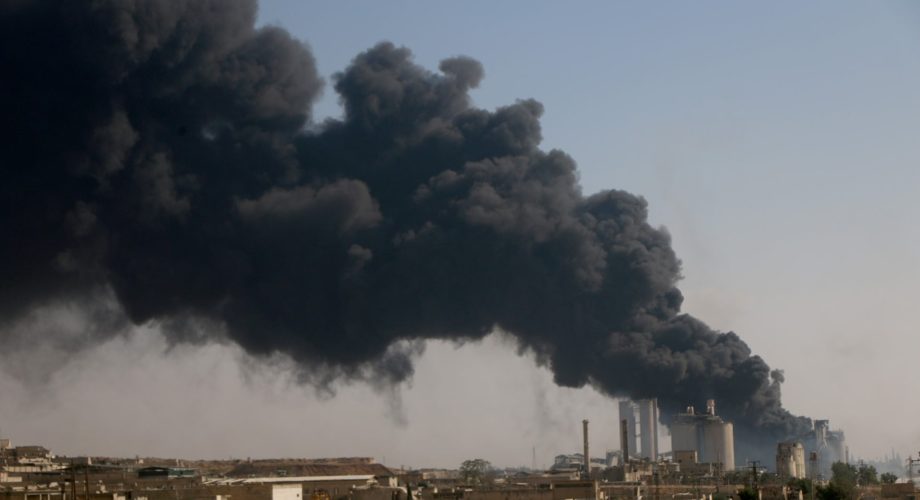 Smoke rises after an airstrike south-east of Aleppo.

The Russian air force has used unguided “dumb” bombs in Syria, in what UN sources say may be an effort to shift responsibility for possible war crimes and civilian deaths to their ally, the Syrian regime of Bashar al-Assad.

UN sources told the Guardian that Moscow’s use of less accurate bombs, which are closer in their capability to the Syrian air force’s weapons stockpiles, may be intended to make it more difficult for war crimes investigators to identify who is responsible for civilian deaths from airstrikes in Syria.

“I suspect they want to use those weapons because it makes attribution more difficult,” the official added.

The allegations raise further doubts about Russia’s claims that its aerial campaign in Syria, which was launched in late 2015 in an effort to shore up Assad’s position, and has reversed his fortunes in the seven-year war, primarily targeted militants and “terrorists”.

It also raises questions about the civilian cost of Russia’s airstrikes, which played a key role in the regime’s victory in late 2016 in the city of Aleppo after a punishing siege and aerial bombardment, as well as the ongoing offensive in the enclave of eastern Ghouta near Damascus, which has killed more than 700 people in two weeks.

Moscow has been accused by weapons experts of using inaccurate munitions in the past in its campaign, but those accusations have been focused on the motivation that they are likely to be cheaper than precision-guided missiles. The claim that such tactics may be meant to elude war crimes investigators has not been made in the past.

The assessment is not shared by all UN officials working on Syria. Other UN officials say the use of inaccurate bombs may be a tactic aimed at scaring civilians, who would in turn pressure rebel groups to surrender.

“My personal sense regarding the use of such weapons in Syria has been that they’re used to create panic, terrorise the civilian population, with the ultimate aim of making it turn against armed groups operating within these communities,” said one official.

The allegations came on the same day as the release of a new report by the UN’s International Independent Commission of Inquiry on Syria, which identified an attack in a town near Aleppo that used unguided munitions to devastating effect. The commission had accused both Russia and the Syrian government of using unguided weapons in the past, particularly during the siege of Aleppo, which it said had relied almost exclusively on such munitions.

The attack on Atarib on the afternoon of 13 November 2017 took place at a crowded market, with a series of airstrikes that damaged or destroyed an area of approximately 5,000 sq metres, and killed at least 84 people. At the time, Moscow denied launching airstrikes in the area, but radio intercepts identified Russian-speaking pilots who took off half an hour earlier from Hemeimeem airbase, the main stronghold for Russian forces in western Syria.

The commission’s investigation into the attack, detailed in an annex in the report, said that two types of weapons were used – blast weapons and earth penetrators. Based on video and images from the site, including of an unexploded bomb, investigators said the weapons used were the unguided OFAB-500 fragmentation bomb, which is manufactured by Russia, and the BeTAB-500 unguided bunker buster bomb, which the Russian air force has used multiple times in Aleppo.

“The impact points show that unguided bombs roughly fell in a line with a 250m dispersion, which suggests that the aircraft lined up on the target dropping weapons into an area that formed a target box rather than conducting a precision strike against the point target,” the report said.

The commission’s report did not speculate on the reasons why Russia used less precise weapons, and said the target of the strike may have been a meeting involving al-Qaida-linked militants. But the Russian denial of the airstrikes, coupled with the use of Russian-made unguided bombs, lends credence to the allegations that Moscow sought to obfuscate its involvement in airstrikes near a crowded market that would likely cause heavy civilian casualties.

“There is no evidence to indicate that this attack deliberately targeted civilians or the Atarib market,” the report concluded. “Through the use of unguided bombs, including blast weapons in a densely civilian populated area, however, this attack may amount to the war crime of launching indiscriminate attacks resulting in death and injury to civilians.”

The commission’s report, which covered the period from July last year to mid-January, also said it would help victims of crimes in the Syrian war pursue justice through national and international jurisdictions in the future. The possibility of prosecuting war crimes and crimes against humanity in Syria by the international criminal court has so far been stymied by the threat of a Russian veto.

The ICC can only investigate cases if they are referred to it by the UN security council or by a country voluntarily joining the organisation.

The commission also documented a chemical attack against rebel fighters in eastern Ghouta in November last year, and condemned both the ongoing siege and the retaliatory shelling of Damascus by rebel groups.