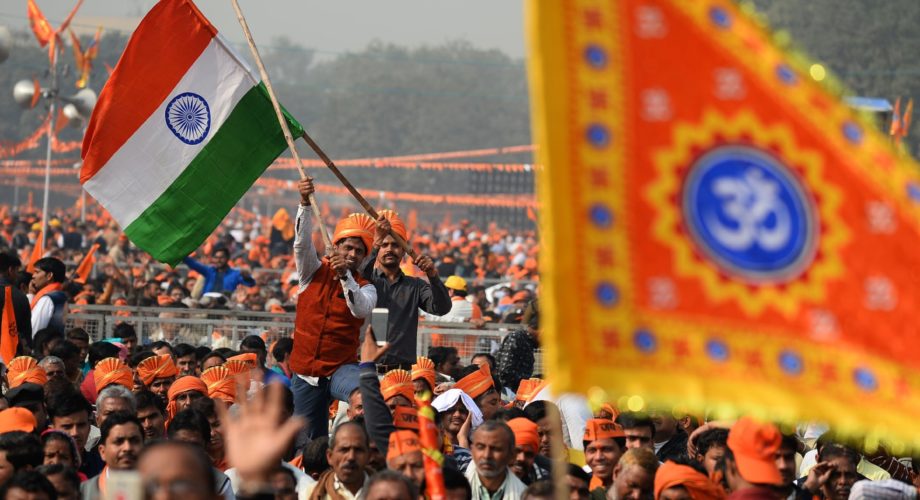 Tens of thousands of Hindus at a rally calling for the construction of a temple on the site of the demolished 16th-century Babri mosque in Ayodhya.

The Indian supreme court has ruled that India’s most hotly contested piece of religious land rightfully belongs to Hindus, and has granted permission for a temple to be built on the site in Ayodhya.

The five supreme court judges based their unanimous and historic judgment on Hindus’ claim that the site is the birthplace of the god Ram.

They ruled that a mosque that had stood on the site since the 16th century, and was the basis of the Muslim claim to Ayodhya, was “not built on vacant land” and that the Hindu belief could not be disputed.

The judges declared that a separate “prominent” five-acre piece of land would be allocated to the Muslim community to build a mosque near the contested site.

The ruling, just six months after his landslide election win, is another huge victory for India’s prime minister, Narendra Modi, and his Bharatiya Janata party (BJP) government, which have made the restoration of the Ram temple at Ayodhya a focal point of their Hindu nationalist agenda. The supreme court judges said plans for the temple would be drawn up within the next three months.

“It is a historic judgment,” said Varun Kumar Sinha, a lawyer for Hindu Mahasabha, a rightwing party that advocated for the rebuilding of the Ram temple at Ayodhya. “With this judgment, the supreme court has given the message of unity in diversity.”

The head of the Hindu nationalist RSS organisation, Mohan Bhagwat, echoed Sinha’s comments and said his group welcomed the decision. “This case was going on for decades and it reached the right conclusion,” he said. “This should not be seen as a win or a loss.”

Zafaryab Jilani, the lawyer for the Muslim claimants, the Sunni Waqf Board, challenged the decision and said the board would meet later to decide whether to file an appeal. “We respect the supreme court, we respect the judgment, but we are not satisfied with this,” he said. “There are a lot of contradictions within the judgment. Five acres has no value.”

Conflict over Ayodhya has been raging between India’s Muslims and Hindus for more than 150 years. Muslims say it is a historical place of worship, but Hindus say the mosque, built by the Mughal emperor Babur, was on the site of an older temple honouring Ram’s birthplace.

The country was put on high security alert following the verdict for fear of religious violence and rioting. Thousands of police and paramilitary troops were dispatched to the state of Uttar Pradesh and around 500 people arrested in the days before. Protests and parties were also banned in Ayodhya.

The supreme court judges said their ruling was conditional on the “maintenance of peace and order and tranquility”.

The city was quiet in the immediate aftermath of the verdict. All non-residents were obliged to leave the city on Friday night and no one was allowed to leave their house without their identity card. A few firecrackers were set off, but the heavy police presence kept celebrations and protests muted.

Rajatram Maurya, a tailor in the city who used to grow flowers on the temple land before it was claimed by the government, had mixed feelings to the ruling. “The verdict is good for all, but I lost my land in this and the compensation I got from the government was barely anything … But I am glad there is peace in Ayodhya.”

Modi said on Twitter that the judgement “highlights that any dispute can be amicably solved in the spirit of due process of law. It reaffirms the independence, transparency and farsightedness of our judiciary. It clearly illustrates everybody is equal before the law.”

BJP members led a march to Ayodhya in December 1992, during which hundreds of thousands of people descended onto the Babri mosque and reduced it to rubble with hammers and axes. More than 2,000 people were killed in the rioting and violence that ensued, and some BJP members are still facing trial for their role in the violence.

This destruction of the mosque has been cited as a pivotal moment in the failure of secularism and religious inclusivity in India, fracturing the country down religious lines that have been politically exploited ever since.

The sensitive decision over whether to rebuild a place of Muslim or Hindu worship on the site was dragged out over 27 years. A 2010 court ruling divided the land between Muslims and Hindus, but was rejected by both sides. The case was taken to the supreme court in August.

Since Modi and the BJP took power in 2014, the rebuilding of a Ram temple at Ayodhya has been at the forefront of their Hindutva agenda, which has pushed India away from its secular roots and toward a strongly Hindu identity.

This has led to growing hostility and violence toward the country’s Muslims, who number 200 million. Muslim history has been removed from school textbooks and there has been an increase in reports of vigilante Hindu mobs murdering Muslims suspected of killing cows, which are sacred in Hinduism.

In June, a Hindu mob tied a Muslim man to a lamp and lynched him to cries of “hail Lord Ram”. The Modi government’s actions in Kashmir in August, stripping the state of its long-held semi-autonomy, was also seen as directly targeting its majority-Muslim community.