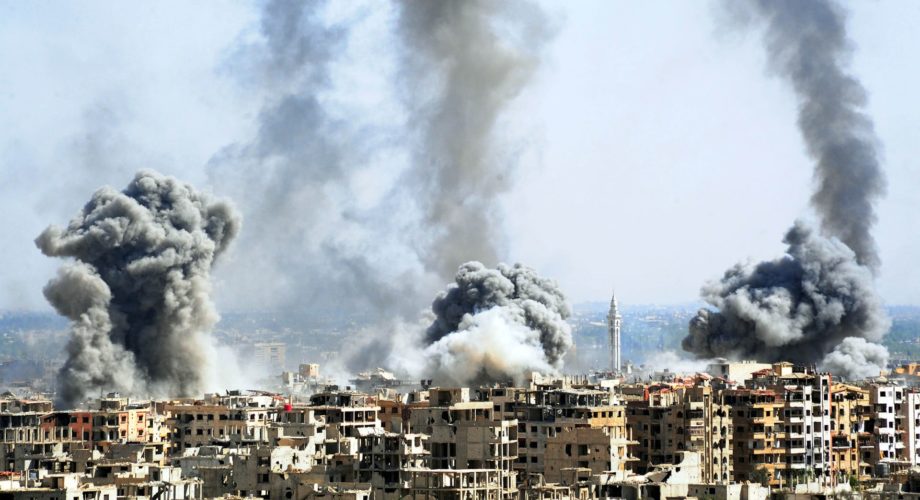 Smoke rises from shelled buildings in Douma on Saturday.

Rebel fighters and civilians have begun preparing to leave the besieged town of Douma near the Syrian capital of Damascus after a chemical weapons attack over the weekend killed dozens and drew worldwide condemnation.

Buses expected to transport local rebels and residents to their forced exile in northern Syria began arriving in the early hours of Monday, after negotiators announced a deal had been reached in the immediate aftermath of the suspected toxic gas attack, which killed at least 42 people.

“I am leaving tomorrow, God willing, because our mission has ended,” said a paramedic who treated the chemical attack victims. “I am saying thank God that the mass killings are over, but I am saddened that I will leave my land and my people, possibly never to return. But I will leave knowing that I gave everything I could until the end.

“I will take the memories of my home that was bombed and some photographs. All I will carry is two suitcases, but in my mind and my memory is so much of what we lived through.”

Douma is home to more than 100,000 civilians, according to UN estimates. It is the largest town in eastern Ghouta, a region that was once the breadbasket of the Damascus region but has been besieged for years by the regime of Bashar al-Assad. Tens of thousands of people have already fled other parts of Ghouta after a two-month bombardment that has killed nearly 2,000, and other rebel groups have agreed to surrender deals that allow their exile to northern Syria.

A similar deal for Douma had foundered in recent days over the insistence of the local rebel group, Jaish al-Islam, that it wanted to stay in the city.

But after the alleged chemical attack, which followed an intense bombardment that began on Friday and appeared aimed at forcing a deal, negotiators said they had reached an agreement that would allow the exile of fighters and those who wish to leave from among the civilians.

Under the terms of the deal, those who choose to stay behind are supposed to be protected by Russia from prosecution and will reconcile with the Assad regime, and will not be called upon to do mandatory military service for six months. Russian military police are supposed to deploy in Douma to act as a guarantor of the agreement.

Civilians and fighters are expected to be transported to Jarablus, a town near the Turkish border that is controlled by Ankara-backed rebel fighters who reclaimed it from Islamic State last year. Similar forced displacement deals have taken place all over Syria.

“I am now spending my last farewell moments with my city, Douma, and I am leaving it hoping to return one day,” said an activist who planned to leave on Tuesday aboard the buses. “The bombing and destruction that we lived through for seven years has been concluded. All the masks have fallen. We only left to save those who remained from the women and children.

“I have no choice, and my heart is aching with sadness at leaving my city, my small home, my street and its kind people.”