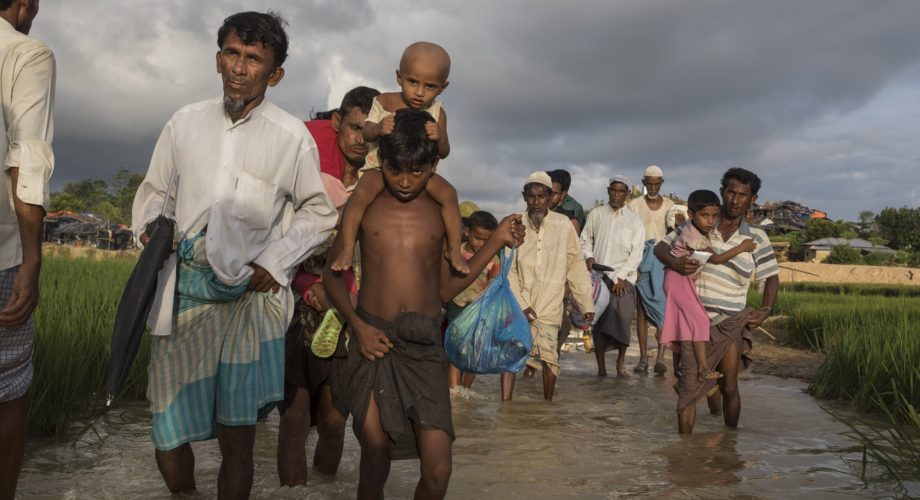 Rohingya carry belongings through muddy water in the refugee camp at Cox’s Bazar. Over 500,000 Rohingya have fled into Bangladesh since August.

For journalists from Bangladesh and Myanmar, the Rohingya crisis is a big news story that demands both aggressive reporting and a sensitive approach.

Even for the most experienced reporters in both countries are having difficulty to report from the other side.

Though diplomatic ties are intact, relations between Bangladesh and Myanmar are strained over the crisis, which has seen more than 600,000 Rohingya Muslims flee from Myanmar’s Rakhine State to Cox’s Bazar just across the border. Though Myanmar has agreed to take back refugees, doubts remain over the prospect of repatriation.

The exodus followed attacks by the Arakan Rohingya Salvation Army on August 25, the second operation by the group in under a year.

In this tense climate, journalists from the two neighboring countries are even more restrained than usual.

For Myanmar reporters, the problem was highlighted in September when two prominent photographers were arrested in Cox’s Bazar and initially suspected of espionage.

Charges were later downgraded to immigration offenses and they were let go after several weeks. Like many in the international media, they had traveled to Bangladesh on tourist visas – the case was also something of a cautionary tale.

Myanmar journalist Mratt Kyaw Thu, a senior reporter for Yangon- based Frontier magazine, said in an email he had planned to go to Bangladesh to report, but the experiences of the two detained journalists meant two foreign staff members went instead. 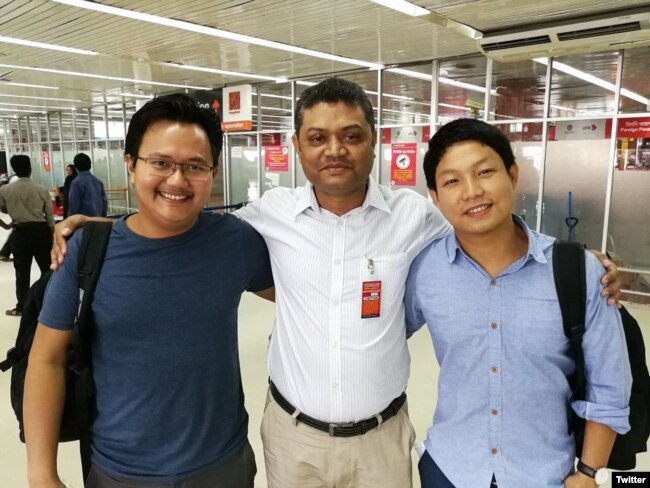 Myanmar photojournalists Minzayar Oo and Hkun Lat, who were arrested in Bangladesh, are seen with their lawyer in a photo posted on Twitter, Oct. 17, 2017.

Still, even foreign journalists based in Myanmar can sometimes face suspicion by association.

Mratt Kyaw Thu said traveling to Bangladesh even from Myanmar can be expensive, and local budgets are small.

“One thing is that security is not only the one reason for Burmese journalists but costs and expenses and some publishing houses’ policy,” he said.

Bangladeshi journalists, who also have travel budget concerns, do have more ability to interview Rohingya refugees who have crossed over, but they run up against their own hurdles. 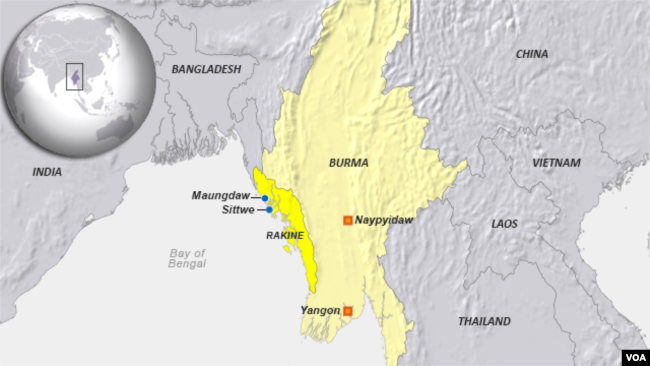 If they travel to Myanmar, it is usually in short, clandestine trips across the border to Rakhine State’s Maungdaw Township, and they cannot go very far into the territory.

They also may find it difficult to verify accounts they hear originating in other parts of the state, as Myanmar has only allowed local and some foreign journalists to travel on trips into northern Rakhine.

There are also, of course, safety concerns.

Hasan al-Javed, an award-winning reporter with the Dhaka-based Daily Amadersomoy, has crossed into Maungdaw from Bangladesh twice, including after August 25. He was terrified of the army, local mobs, and even landmines, and could not go very far because of the associated risks.

“Every time I felt, if I could talk to people freely and move around the locality without any fear, I could give better descriptions for my readers and could find out the truth,” he said.

“Look, in Bangladesh, our government allowed foreign journalists to cover the events so that people can know the facts, said al-Javad. “Since Myanmar is led by a democratic government, it should allow journalists to visit Rakhine State for the sake of truth. Neither any U.N. bodies nor any international pressure groups can do it, rather democratic Myanmar should do it for the sake of humanity.”

Religion — Bangladesh is a Muslim-majority country, while Myanmar is largely Buddhist — and nationality provide another potential obstacle.

Even if allowed to travel freely in other parts of Rakhine, Bangladeshi journalists would almost certainly face issues reporting, especially in the state capital, Sittwe, where suspicion of foreign journalists – let alone foreign Muslim journalists – runs high. Myanmar believes the Rohingya are from Bangladesh originally, and the government calls them Bengali. 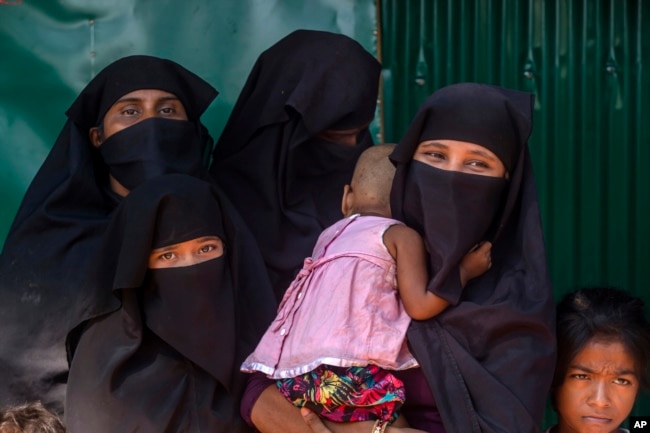 Rohingya Muslim women along with their children, who have crossed over from Myanmar into Bangladesh, wait for the arrival of Queen Rania of Jordan, at Kutupalong refugee camp in Bangladesh, Oct. 23, 2017.

The restrictions faced by journalists from Myanmar come in two forms – lack of ability to see the story from the Bangladesh side, and a similar lack of access to Rakhine State itself, which has only allowed them in on guided tours.

The Yangon-based Myanmar Institute for Democracy (MID) released an interim report this month showing that many Burmese-language news organizations have almost no stories on the humanitarian situation in Bangladesh, though sometimes they use articles from wire agencies.

The report also said sourcing is one of the main problems.

“A big chunk of the coverage comes from the government organization, like the state counselor [Aung San Suu Kyi’s office], president, and then the armed forces,” said Maw Zin, the institute’s director.

MID recommends the government remove barriers to accessing parts of northern Rakhine State, which would help journalists in Myanmar get information from a variety of sources.

Viewpoint / Should we ban sex robots while we have the chance?