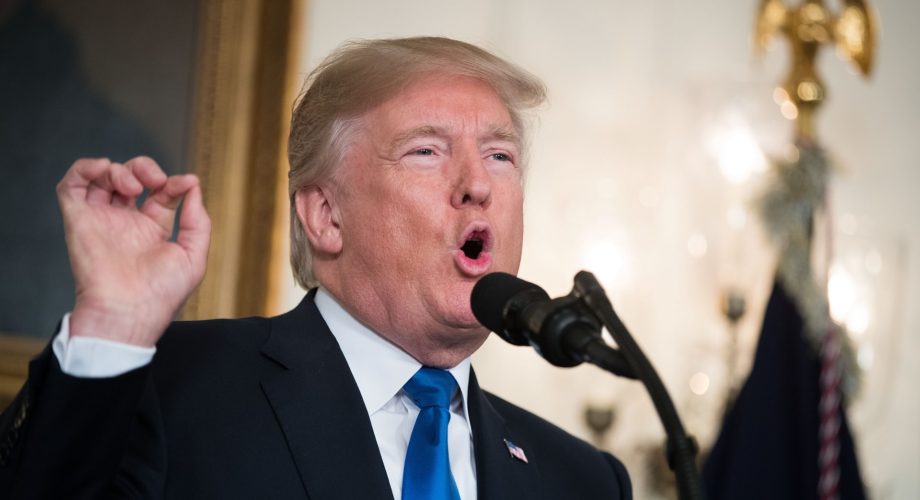 Donald Trump has threatened to terminate the 2015 nuclear deal if Congress and US allies fail to amend the agreement in significant ways.

In a vituperative speech on Friday that began by listing Iran’s alleged crimes over the decades, Trump announced he would not continue to certify the agreement to Congress, but stopped short of immediately cancelling US participation in the deal.

He said his administration was ready to negotiating with Congress and US allies on ways to toughen the obligations on Iran and making them permanent. But he made clear that if those negotiations failed to reach a solution, he would unilaterally pull the US out of the international agreement signed in Vienna two years ago.

“Based on the factual record I have put forward, I am announcing today that we cannot and will not make this certification. We will not continue down a path whose predictable conclusion is more violence, more terror and the very real threat of Iran’s nuclear breakout,” Trump said.

The president declared: “I am directing my administration to work closely with Congress and our allies to address the deal’s many serious flaws so the Iranian regime can never threaten the world with nuclear weapons.”

He noted that congressional leaders were already drafting amendments to legislation that would include restrictions on ballistic missiles and make the curbs on Iran’s nuclear programme under the 2015 deal permanent. European diplomats have warned that any such unilateral changes to the agreement are likely to trigger the deal’s collapse and a return to a nuclear standoff in the Middle East.

But Trump made clear that if the changes were not made, he would personally pull the plug on the deal.

“In the event we are not able to reach a solution working with Congress and our allies, then the agreement will be terminated,” Trump said. “It is under continuous review and our participation can be cancelled by me, as president, at any time.”

On two major issues, Trump flatly contradicted his own secretary of state, Rex Tillerson, who had briefed journalists on Thursday evening. Tillerson said that new restrictions on Iranian missile development and the permanent nature of nuclear programme could be laid down in a parallel agreement that could exist side by side with the 2015 deal and not trigger its collapse.

Furthermore, the president said he had ordered the US Treasury to sanction Iran’s “entire” Islamic Revolutionary Guard Corps (IRGC). Only hours earlier, Tillerson had said that was impractical for such a large organisation and that instead, selective sanctions would be used against individuals and entities responsible for arming and funding militant groups abroad.

The administration’s new, tougher, policy on Iran appears to be a messy compromise between a president determined to obliterate the diplomatic legacy of his predecessor, and his top cabinet officials and US allies, who have sought to preserve the agreement as way of avoiding a new nuclear crisis in the Middle East.

The implications of that approach are unclear. The other signatories to the deal, including three European allies, Russia, China and Iran, have said renegotiation is impossible.

Within minutes, the EU foreign policy chief, Federica Mogherini, issued a stinging rebuke to Trump’s threat, pointing out that the nuclear deal had been enshrined in a UN security council resolution in 2015, that could not simply be terminated by one country.

“To my knowledge there is not one single country in the world that can terminate a UN security council resolution that has been adopted,” Mogherini told journalists in Brussels. “The president of the United States has many powers, but not this one.”

But Israel’s prime minister Benjamin Netanyahu was quick to praise the speech, in a video prerecorded before the beginning of the Jewish sabbath in Israel.

Netanyahu, who has for years lobbied for a tougher US policy against Iran and who had clearly been briefed on the content, said he wanted to “congratulate president Trump for his courageous decision today” and for “boldly confront[ing] Iran’s terrorist regime.”

“President Trump has just created an opportunity to fix this bad deal, to roll back Iran’s aggression, and to confront its criminal support of terrorism. That’s why Israel embraces this opportunity,” he said.

Trudeau plans to invoke Emergencies Act in response to protests

More than 11,000 Ontarians have died with COVID-19: Health ministry