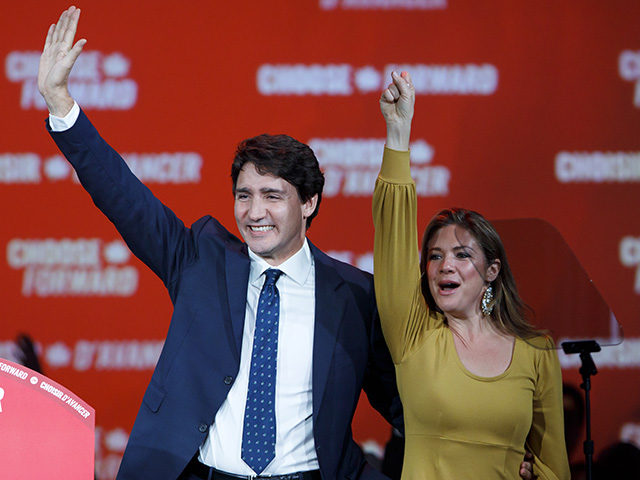 After eking out a win in the first major test of his popularity since sweeping to power in 2015, Justin Trudeau was given his first taste of a minority government on Tuesday, as rival party leaders begin laying out their conditions for the Liberal leader to remain as Canada’s prime minister.

“Everything is on the table,” Jagmeet Singh, leader of the leftwing New Democratic party, told reporters.

Singh, whose party could hold the balance of power in the next parliament, outlined his policy priorities, including affordable housing and healthcare. “I’m hoping that Mr Trudeau respects the fact that there’s a minority government now, which means we’ve got to work together.”

After winning 157 of 338 seats in the country’s general election – despite losing the popular vote to the Conservative party – Trudeau now faces a landscape that will require deft political maneuvering to strike deals and pass legislation and rivals who could unseat his government on a whim.

The result also shows a significantly weakened prime minister straining under both the heavy baggage of incumbency and extensive damage to his personal brand.

“We seek hardship for none and prosperity for all, and if we unite around these common goals, I know we can achieve them,” Trudeau told cheering supporters in Montreal, telling the crowd that that Canadians had sent a decisive message of support for progressive policy on climate change and Indigenous issues.

Despite his lofty rhetoric, the contrast with Trudeau’s 2015 landslidewas stark, especially given the immense political capital he has spent defending progressive policies.

But in recent months, as the prime minister has been dogged by scandal – including accusations that he improperly pressured his attorney general to abandon prosecution of a major engineering company and emergence of Trudeau in blackface – he has largely abandoned his “sunny ways” vision of government.

No one “slam dunk” reason explains why the prime minister’s popularity has ebbed, said Lori Turnbull, a professor of political science at Dalhousie University in Nova Scotia.

Turnout for the general election was lower than in 2015, meaning the “red wave” driven by first time voters flocking to Trudeau failed to materialize for a second time.

“People took a chance on him four years ago and maybe didn’t come back for a second time,” said Turnbull.

For those who did came back, initial excitement has largely given way to frustration.

“The Liberal record on the environment is always been pretty horrible, and it doesn’t seem like he’s going to change that,” said Jonathan MacCalder, a Toronto voter who supported the prime minister in 2015.

In a country heavily reliant on natural resources, Trudeau’s efforts to strike a balance on the environment and economy have been criticized by both the right and the left. His government brought in a carbon tax to fight the climate crisis – but also paid billions to rescue a stalled pipeline project.

While MacCalder feels Trudeau has lost much of his appeal – likening the prime minister to Barack Obama, the former US president who swapped boundless hope for a bleaker pragmatism in his second term – he nonetheless voted for the Liberals on Monday.

“I think a good thing for the country and the ability to move forward,” he said of the result.

Trudeau’s own father, Pierre Trudeau, also served his second term of office at the head of a minority government – a scenario which requires deft political maneuvering in order to strike deals and pass legislation.

But the younger Trudeau took what experts say is the weakest popular vote ever, in a result which reflects an increasingly fractured country.

Not a single Liberal was elected in the western Prairie provinces, which Turnbull called a “major problem” for Trudeau.

But while the Conservatives were able to make marginal gains, Monday’s result marked a clear defeat for Scheer, whose campaign pledges to quash carbon pricing legislation and cut taxes failed to resonate with voters.

Scheer, who had openly mused about winning a majority in the days leading up to the election, nonetheless issued a stark warning to the Liberals on Monday evening.

“Mr Trudeau, when your government falls, Conservatives will be ready and we will win,” the Scheer told supporters at his concession speech.

But his own party’s poor performance is likely to raise questions about Scheer’s viability as a leader, after he failed to catalyze voter frustration and topple a wounded Trudeau. Heading into the final weeks, the incumbent prime minister was fending off attacks for his role in the SNC Lavalin scandal, as well as apologizing for images showing him in blackface.

“If Scheer couldn’t win now – when will he?” said Turnbull, pointing out that the Tory leader failed to grow his base beyond the Prairies.

While Monday’s result marks a significant erosion of support for the prime minister, the narrow victory will be enough to ensure Trudeau’s signature policies – including the national carbon tax – remain in place.

Now, all eyes will be on how Trudeau reaches out to parties with a “confidence-and-supply” deal, in which junior partners support the government on individual pieces of legislation, as opposed to joining in a fully-fledged coalition.

The deal-making will leave the balance of power in the hands of the New Democratic party and the nominally separatist Bloc Québécois.

While it holds the necessary amount of seats the to prop up a Liberal government, the NDP is also cash-strapped and struggling, having literally mortgaged its office in Ottawa to help fund its national campaign.

“The last thing the NDP want is an election. They probably want that lesson anybody does,” said Turnbull. “But if the [Liberal] government wants NDP support, they will likely have to make some kind of concession for it.”

Singh – who failed to convert immense personal popularity in the country into electoral wins – has made a commitment to fighting climate change and funding healthcare key requirements for co-operation from the NDP, meaning Trudeau could steer his government further to the left.Advertisement

Since Yves-François Blanchet took over as leader in January the Bloc has roared back into relevance with its strong performance – and is also keen to do business with Trudeau. With 32 seats in parliament, it has more clout than the NDP. While Blanchet vowed to fight any action that would negatively impact the francophone province, including any pipeline projects, he also left the door open to supporting the Liberals.

“The government has options,” said Turnbull. “As much as [Singh’s] got the numbers to be a kingmaker, so too does somebody else. This will be interesting to watch.”