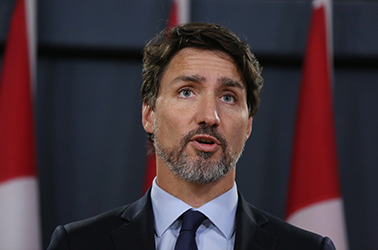 The Liberals unveiled a $37-billion plan for workers affected by the novel coronavirus pandemic, just weeks ahead of the end of the Canada Emergency Recovery Benefit.

The new measures include broad changes to Employment Insurance and the creation of three new benefit programs.

The CERB will be extended another four weeks, and a new benefit that pays $400 a week for up to 26 weeks will replace it for those ineligible for EI.

Anyone eligible for EI will get the same minimum for at least 26 weeks and will need to have worked 120 hours to qualify, well below current EI requirements, since many Canadians have been unable to work due to the pandemic.

Also among the new benefits is a $500 weekly caregiving benefit. At the press conference Thursday, Employment Minister Carla Qualtrough said this benefit will help anyone who has to stay home because because school or daycare is closed.

Qualtrough noted she expected the benefit will help women in particular, who more often assume the role of caretakers.

A third new benefit will provide $500 weekly for up to two weeks for those who don’t have paid sick leave and become sick or must self-isolate due to reasons linked to COVID-19.

Changes are also coming in to allow workers to keep more of their benefits even while they’re working, eliminating the earnings cliff created under CERB that acted as a disincentive to work.

Most of the EI changes and the three new benefits will kick off on Sept. 27 and remain in force for one year, according to senior government officials. The expected cost to taxpayers will be of $8 billion for the one-month extension of CERB, $7 billion for the planned modifications to the EI program and $22 billion for the new benefit programs, the officials said.

There are currently around four million Canadians still receiving CERB. Of those, around three million are expected to transition to EI and one million to the other benefits, the government said.

Here are the details of the plan:

Canadians who were set to run out of CERB payments at the end of August can breathe a sigh of relief.

Under the old rules, workers could only apply for a maximum of six of the program’s seven four-week eligibility periods. This meant those who had been continuously eligible for the CERB since the first period starting on March 15 were set to run out of benefits by the period ending on Aug. 29.

The new rules would extend CERB eligibility by another four-week period, or 28 weeks in total.

As of Sept. 27, the government is also upping the EI benefits rate to a minimum of $400 a week. Normally, claimants stand to receive 55 per cent of their average weekly earnings, up to a ceiling of $573, but there is no floor on how little they can get.

Thanks to measures introduced on Aug. 9, claimants also stand to receive at least 26 weeks, or roughly six months, of benefits. Usually, the number of weeks of benefits ranges from 14 to 45 depending on the local unemployment rate. Higher regional jobless rates normally unlock longer benefit periods under the assumption that out-of-work applicants will take longer to find new employment.

With a few exceptions, Canadians who received CERB through Service Canada will be seamlessly transitioned to EI, without need to reapply. Those who qualify for traditional unemployment benefits but have been receiving CERB through the Canada Revenue Agency will have to file a new EI application.

To lessen the financial burden of the changes on employees and employers during a delicate economy recovery, Ottawa is also imposing a two-year freeze on EI premium rates, which would normally be expected to increase in 2021 as large numbers of Canadians access the program due to COVID-19.

All three benefits will be administered by the CRA, with applications opening in October and claimants able to simply attest that they qualify for the programs, as with CERB. Also like the current emergency benefits, the new payments will be taxable.

The Canada Recovery Benefit will provide $400 a week, the same as the minimum weekly benefit under the modified EI, for up to 26 weeks. Recipients will have an obligation to be available for work and look for employment while on the benefit.

However, they will be able to earn up to $38,000 in annual net income from employment or self-employment while receiving payments. Beyond that threshold, they will have to repay 50 cents for every additional dollar earned, like EI recipients need to do when working while on claim.

The benefit is available only to workers who stopped working or saw their incomes reduced because of COVID-19, raising questions about whether Canadians who became unemployed before the pandemic and aren’t eligible for EI would be able to access these payments.

The Canada Recovery Sickness Benefit will provide $500 per week for up to two weeks for workers who do not have access to other types of paid sick leave. As with CERB, applicants will be able to submit an attestation that they qualify for the benefit.

The Canada Recovery Caregiving Benefit will provide $550 per week per household for up to 26 weeks and is also attestation-based. Families who choose not to send their children to reopened daycares and schools are open will not be eligible for the benefit.

However, if parents receive advice by a medical professional to keep their kids home due to underlying health conditions that heighten the risks linked to COVID-19, they will be able to receive payments, a senior government official said.