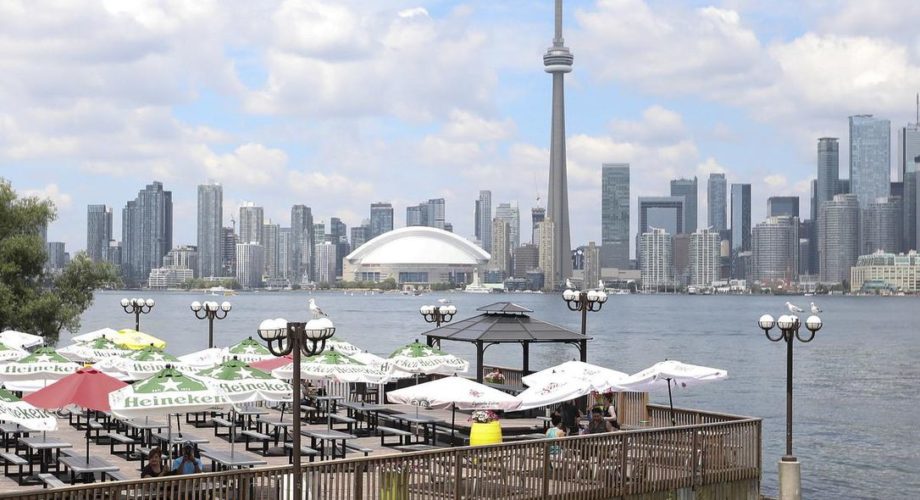 Ontario Premier Doug Ford is expected to make an announcement about moving to Stage 3 reopening on Monday.

Toronto and Peel Region will move into Stage 3 of Ontario’s COVID-19 recovery plan this Friday, the Ministry of Health said this morning, as the province reported its fewest number of new cases since March 23.

Windsor-Essex, the only other area of the province that is still in Stage 2, will not be permitted to proceed to the next phase at this point.

Stage 3 allows for activities such as indoor dining in restaurants, live performing arts shows and the reopening of movie theatres and playgrounds. It also permits larger gatherings of people, though social distancing requirements remain in place.

In a news release, the Ontario government said the decision was made because of “positive local trends of key public health indicators” in Toronto and Peel, including consistently lower new daily cases, hospital capacity and an ability to contact trace confirmed cases of COVID-19.

“We have made tremendous progress that allows us to return to something a little closer to our normal lives this summer, but we are not out of the woods yet,” Ontario Premier Doug Ford said.

“This virus is still among us and we have to be extra cautious to avoid sparking a surge or an outbreak. I strongly urge everyone to continue following public health protocols.”

In a series of tweets this morning, Health Minister Christine Elliott noted that just 76 new cases of COVID-19 were confirmed in Ontario between 4 p.m. ET Monday and 4 p.m. ET Tuesday, the 24-hour timeframe the province uses in its daily reports.

The number of patients in Ontario hospitals with confirmed cases of the illness declined down to 91, the fewest since the province began reporting hospitalization figures on April 1. The number of those patients being treated in intensive care units and with ventilators also declined.

The province has now seen a total of 38,986 confirmed cases of COVID-19 since the outbreak began in late January. Of those, a full 89 per cent are considered resolved by public health officials.

There are currently about 1,476 active cases provincewide.

Toronto and Peel, Ontario’s two most populous areas, have both seen steady declines in new daily cases over the last week. In the Ministry of Health’s COVID-19 update yesterday morning, the two public health units had six and seven new cases, respectively.

Further, Toronto Public Health — which reports more timely data on COVID-19 in the city relative to the province — said later in the afternoon that it had confirmed just one additional case yesterday.

In this morning’s provincial update, Peel confirmed four new infections of the novel coronavirus, while Toronto was listed as “-13,” likely the result of double reporting of cases at some point this week. CBC News has reached out to the Ministry of Health for clarification.

Despite the apparent progress in curbing the spread of the illness, Toronto Mayor John Tory has asked the province to implement additional measures that would be applied to bars, restaurants and indoor dining settings in the city.

In a letter to Ford earlier this month, Tory called for six actions that he hopes will be put in place quickly, including early closure times, further physical distancing restrictions and requiring customers to stay seated at all times.

Meanwhile, the province said it will continue to monitor trends in Windsor-Essex in the coming days and weeks.

The areas of Kingsville and Leamington are still experiencing localized outbreaks among temporary farm workers who often live in cramped conditions.

Two dozen of Ontario’s 34 public health units were allowed to enter Stage 3 on July 17, with another seven joining them on July 24.

Two cities currently in Stage 3, Ottawa and Sudbury, have seen new cases of COVID-19 emerge in recent days, but Ford said Tuesday there are no plans to roll back the reopening in any areas.

Ford also revealed details of the province’s independent commission into how and why COVID-19 devastated much of the long-term care system.

A high-profile judge who served as lead counsel for the Ontario government in the Walkerton inquiry will lead the province’s commission into the COVID-19 pandemic’s effect on long-term care homes.

Frank Marrocco, an associate chief justice with the Ontario Superior Court of Justice, announced today that he has agreed to chair the commission.

In a news release, the province said Wednesday that the commission has the power to conduct an investigation, including compelling people to give evidence, issuing summons, and holding public meetings.

However, the news release also says the commission will report without expressing any conclusion or recommendation regarding the civil or criminal responsibility of any person or organization.

Ontario’s long-term care facilities have been hard hit by COVID-19, with 1,844 residents and eight staff members dying of the virus as of Wednesday.

Merrilee Fullerton, Ontario’s minister of long-term care, announced in May that the Ford government would launch an independent commission.

Ford said he would expedite the commission after soldiers who were deployed to several facilities detailed conditions the premier described as “horrific.”

The commission is expected to deliver its final report by April 2021.

CBC News has counted more than 2,000 COVID-19-linked deaths among long-term care residents in Ontario, accounting for just under three-quarters of all deaths from the illness in the province. At the height of the crisis, public health officials tracked outbreaks in nearly half of Ontario’s 626 long-term care facilities.

The situation became so dire that members of the Canadian Armed Forces were deployed to seven long-term care homes to assist staff. Military personnel were so alarmed by what they observed that they issued a report detailing horrific conditions and allegations of abuse.

Fullerton said at the time that the commission would begin its work in September, and that the provincial government would reveal its leadership, scope and tentative dates for completion before then.

The Ontario Long-Term Care Association, opposition parties and the Service Employees International Union (SEIU) all called for a full public inquiry into the sector, rather than an independent commission.

Those advocating for a public inquiry say it would result in a more thorough accounting of the long-term care system’s failures during the crisis.

But Fullerton said that “an independent, non-partisan commission is the best way to conduct a thorough and expedited review.”