Forced selling may be headed for Canada’s housing market 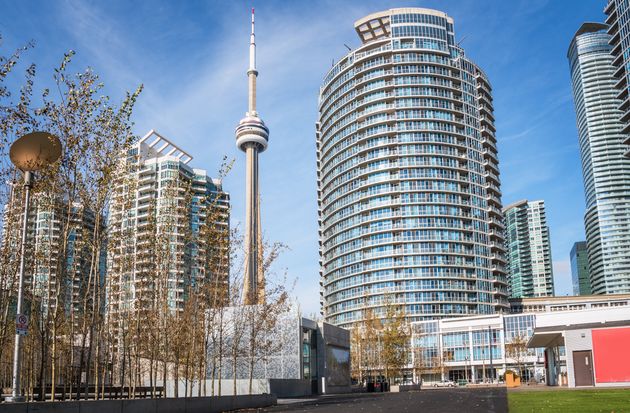 Toronto's skyline is seen here in an undated photo.

Some previously priced-out homebuyers might have a shot at getting into pricey housing markets right now.

A sharp rise in joblessness, combined with the bust-out of the short-term rental market, will send Canadian house prices down in the short term, some market experts are saying.

And for some homebuyers ― those who are still in decent financial shape in this crisis ― that presents a rare opportunity for bargains in some of Canada’s priciest cities.

So far, experts aren’t predicting a huge price decline. Stephen Brown, senior Canada economist at U.K.-based Capital Economics, says the drop will be softened by the fact banks are delaying mortgage payments for many struggling homeowners. That reduces the pressure on some households to sell.

But that likely won’t stop a house price drop entirely, Brown wrote in a client note this week, predicting a 5-per-cent slide in the coming months.

And “there is clearly a risk that the small number of houses that change hands do so at even lower prices,” he added.

With unemployment spiking at a record-breaking pace in recent weeks, and with the tourism industry shutdown taking all the wind out of the short-term rental (meaning Airbnb) market, “it seems likely that there will be some forced sellers in the coming months,” Brown wrote.

“Those sellers will inevitably have to accept lower bids from the few people willing to buy in the current environment.”

And indeed there will be few buyers. Home sales data for recent weeks for Toronto and Vancouver show sales have largely evaporated in the two cities, down around 80 per cent in recent weeks in Toronto, compared to the same period a year ago, according to data released by realtor Doug Vukasovic.

In Vancouver, they are down around 50 per cent in the first few weeks of April, according to realtor and housing analyst Steve Saretsky. Inventory is growing, but many Vancouverites have pulled their homes off the market in the pandemic, with new listings down even more than sales, around 60 per cent.

In Toronto, new listings are down by 50 per cent, much less than sales, making Toronto a “buyer’s market,” Vukasovic said in a report emailed to media Wednesday.

“Some buyers … are trying to leverage the situation and (are) seeing some success in securing homes without competing against other buyers and getting a slight break in pricing,” Vukasovic wrote.

“Most of these transactions are from buyers with budgets under $1 million who were unable to compete during the competitive conditions we experienced earlier this year.”

Still, prices are “sticky” so far, holding up far better than sales numbers. Condo prices in Toronto gave up all their gains from the past year, but are roughly where they were a year ago. Detached homes prices are down 8 per cent from a year ago, and appear to be a on a clear downward trend.

In a report this week, National Bank of Canada economist Marc Pinsonneault said the decline in house prices will hit cities in Central and Eastern Canada more than those in Western Canada, which were already fairly weak before the COVID-19 crisis.

Most of the price growth over the past year has been in Toronto, Hamilton, Ottawa-Gatineau, Montreal and Halifax, Pinsonneault noted, and “we expect the loss of momentum to be more prevalent” in those markets, he wrote.

The Teranet-National Bank House Price Index for March showed prices 3.8 per cent higher than a year earlier, among the 11 major cities covered by the survey,

“This cooling of activity should soon be reflected on the house price indexes,” he wrote.