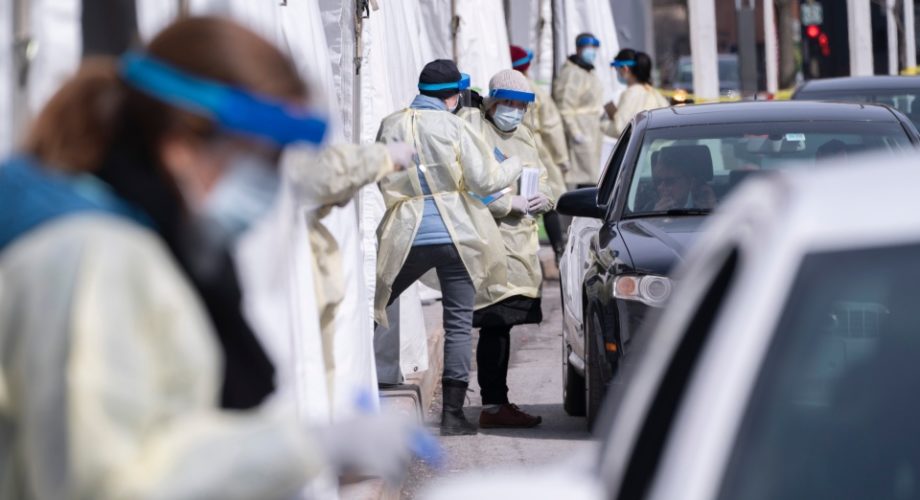 ECanada’s Wonderland is taking guest adventures to new heights in 2020 with the addition of a multi-level cliff jumping attraction in the water park and an exciting airplane ride for children in Planet Snoopy.

Canada’s Chief Public Health Officer Dr. Theresa Tam announced on Tuesday that Canada has completed over 346,000 COVID-19 tests. Of that total, some five per cent are positive for the new novel coronavirus.

Tam has previously told Canadians to not just “flatten the curve” but use physical distancing to “plank it,” or drive the infection rate to zero. The aim is to reduce the overall infections to keep cases at a manageable number for hospitals to handle.

As the fight against the new novel coronavirus continues, B.C. and Alberta may be starting to show signs of “flattening the curve” and reducing the spread of COVID-19.

With certain provinces seeing some success in slowing down the spread, Colin Furness, who researches epidemiology at the University of Toronto, says Canada is on track for flattening the curve.

“There’s no question we are starting to see the curve starting to flatten – it’s modest so I wouldn’t break out the champagne, but if we were not taking the measures we are taking, we would be in an appalling situation,” Furness said in an interview with CTVNews.ca via telephone.

Furness says Canada is doing more than just contain the virus, he says “we are pushing it back.”

It may not seem like much, but he says it’s enough.

“There’s some few blips of spikes in cases, and we need to smooth those out. But if you look at the long picture there is no question that we are moving in exactly the direction that we ought to be moving in given that we have done some pretty decisive social distancing measures,” he said.

CANADA COMPARED TO OTHER COUNTRIES

When comparing Canada to other countries, some experts underscore the importance of context when looking at the numbers.

A number of countries reported their first cases around the same time, in late January, but not every country has reacted to the coronavirus pandemic in the same way.

Testing approach, available resources and government transparency are all factors that can make one country more susceptible to a surge in infections than another.

Some countries, such as South Korea, took immediate action to slow the spread of the coronavirus by isolating COVID-19 cases and restricting travel. Others, such as Italy and Spain, had their health-care systems immediately overwhelmed by cases, causing the number of deaths to rise dramatically before effective health measures were put in place.

Furness says Canada is past the point of possible devastation like that seen in Italy and Spain, but says when the country gets back to a “new normal” depends on the U.S. border.

“We can’t close the border completely otherwise we would starve to death — and no one is saying we should — but because we’re not, there are still going to be risks,” he said.

With circumstances unique to each country, comparing where Canada is going based on where others have already been is complicated.

“As long as there is coronavirus transmission in the world, all countries are going to be vulnerable,” University of Toronto epidemiology professor Ashleigh Tuite said in a telephone interview with CTVNews.ca.

The same can be said for comparing Canada’s provinces and territories.

While more Canadians are being diagnosed with COVID-19, Canada has started to see the daily numbers in some provinces decrease, which may be a sign that the curve is flattening.

In recent days, British Columbia and Alberta have shown signs that physical distancing measures are working to reduce the spread of COVID-19.

Tuesday’s numbers mark the lowest single-day increases for B.C. since March 29 and the lowest for Alberta since the outbreak began.

“Generally across the country, we seem to have a handle on things and [COVID-19] seems to be if not at the peak at least approaching the peak and moving down the other side of the curve in some places,” Tuite said.

WHAT’S WORKING AND WHAT ISN’T

Although cases may be slowing in certain provinces, Ontario and Quebec continue to see a sharp increase in the number of daily cases.

On Wednesday, Ontario’s total surged past 5,000 infections while Quebec surpassed the 10,000 mark, and health officials say a lack of widespread testing and struggling to limit outbreaks at long-term care homes may be to blame.

Alberta is testing at one of the highest rates in the world at nearly 1,500 per 100,000 people compared to the national average of 910. As of Tuesday, the province had expanded its testing criteria further based on profession and age.

Ontario has the lowest testing rate of any province, sending roughly 3,500 tests a day to its labs even though labs can accommodate 13,000 tests. Ontario’s testing criteria included people who have symptoms and also fall into prioritized groups, which include health-care workers, travellers and long-term care residents and staff.

B.C. has also seen success in tracking community spread early on and limiting outbreaks at long-term care facilities. While in Ontario, nursing homes have seen outbreaks at more than 50 facilities with at least 850 residents and 69 staff testing positive for COVID-19.

Quebec health officials are pointing to timing of its spring break for its surge in coronavirus cases. Spring break took place during the first week of March in Quebec when the province did not have broad physical restrictions in place and thousands of returning travellers went back to schools and work.

However, Ontario and Quebec could see a bend in the curve in the coming weeks following their increased closure of non-essential businesses, stricter lockdown conditions and expanded public health measures.

According to the latest Google data, which is harvested anonymously from users’ location settings, Ontario and Quebec have done the most physical distancing with visits to retail stores and parks falling dramatically in recent weeks.

But Tuite cautions that a dip in case numbers doesn’t mean Canadians are in the clear. She says physical distancing and emergency health measures must continue to be followed until the curve is planked.

“We are starting to see positive signs that we have brought this first wave of transmission under control, but we are going to be dealing with this for the next year or two until we have a vaccine,” she said.

Furness warns that the coronavirus may never be eradicated.

“SARS was exterminated, it wasn’t a very successful virus, but COVID-19 is enormously successful,” Furness said. “We’re seeing it cross into other animals quite readily, which is concerning and means it will likely be endemic. The need for anti-viral drugs and a vaccine will not go away no matter how much physical distancing we do.”