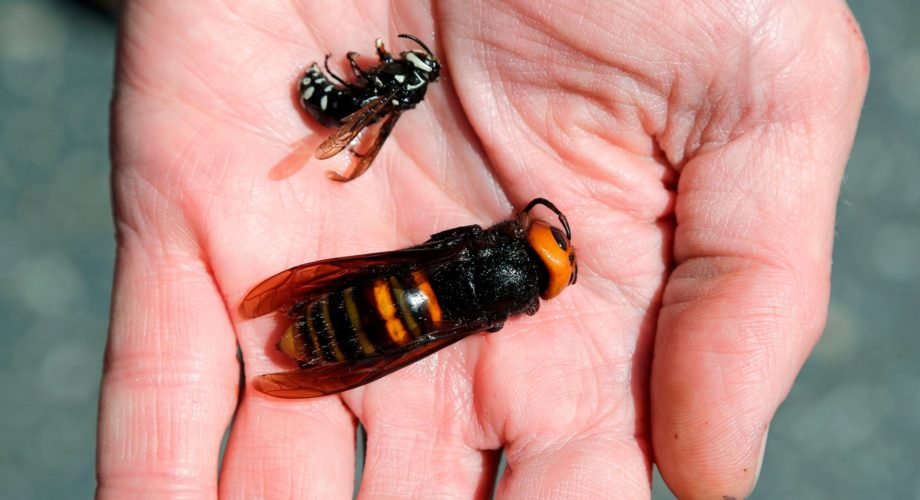 An apex predator as large as an adult thumb, the hornet is endemic to forested and mountainous regions in Asia.

When officials in western Canada received the squashed remains of a hornet in late May, they immediately knew trouble was in their hands.

With its hulking orange and black body, the insect sent in by a concerned resident was unmistakably an Asian giant hornet – an aggressive predator increasingly known as the “murder” hornet.

Fears have grown throughout that the hornet – given the “murder” moniker by Japanese media – is spreading throughout the Pacific north-west. And the latest discovery suggests that the species has reached far deeper into British Columbia than previously thought.

In a letter to beekeepers, Paul van Westendorp, the province’s chief apiarist said more sightings were expected and urged them to remain “vigilant” as hornets and wasps slowly emerge from their nests.

His team plans to conduct a DNA analysis of the dead hornet to determine if it was a queen or a worker. A dead queen would be a welcome find, meaning any attempts by the hornet to gain footing in the region have been slowed. But a dead worker would signal an underground nest had already been established.

An apex predator as large as an adult thumb, the hornet is endemic to forested and mountainous regions in Asia – a landscape similar to much of coastal British Columbia and Washington state.

Last year, bee keepers spotted – and subsequently eradicated – a nest on near the city of Nanaimo on Vancouver Island, sustaining numerous painful stings in the process.

Soon after, beekeepers near American border city of Blaine also found thousands of dead honeybees – the first evidence that the hornets had spread into the US.

“They have massive heads with these giant mandibles and they just chop them in half,” Gard Otis, a bee specialist at the University of Guelph specializing told the Canadian Press. “They just cut their heads off, cut their bodies in half, and you end up with a slaughter on the ground in front of the hive.”

Beekeepers are increasingly concerned that the hornet could continue its spread, putting more pressure on bees, whose declining population already poses a threat to major crops and other plant life.

Experts say that widespread proliferation of the hornets can be contained if individuals are quickly tracked back to a nests.Advertisement

Despite their nickname and incredibly painful sting, the hornets don’t pose a large risk to humans – only a handful of deaths are recorded each year in Asia, largely the result of accidentally disturbing the hornets’ buried nests.

CERB payments to be extended for 2 more months