Canadians and Americans are family. Donald Trump is testing even that 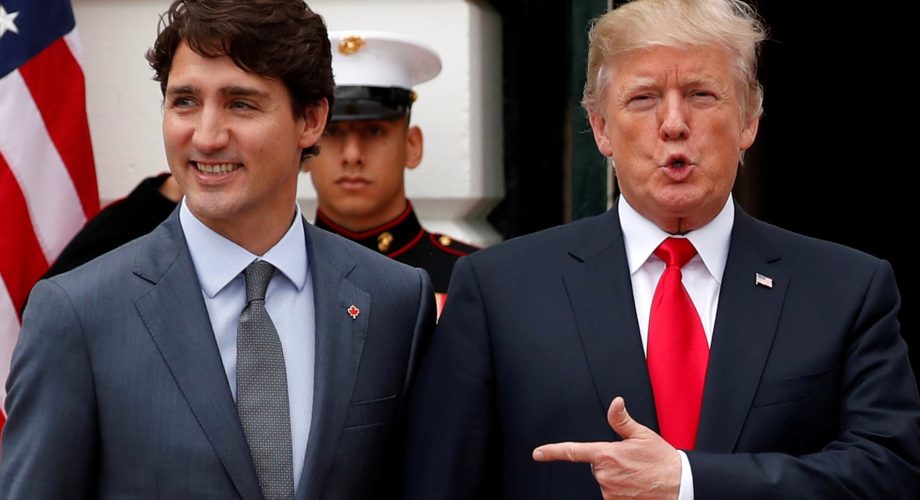 ‘There isn’t a relationship in the world more important to the US than Canada, but Washington’s recent behavior is cause for alarm.’

Playing Russian roulette with your enemy is dangerous; playing it with your best friend is simply reckless. And that is exactly what Donald Trump is doing with American jobs in his negotiations with Canada on Nafta and his ill-conceived tariffs on steel and aluminum.

With a border of 5,525 miles, the US and Canada share the world’s longest unmilitarized border and also boast the largest balanced bilateral trade relationship; Canada-US annual trade exceeds $630bn in goods and services. Thirty-five US states have Canada as their largest export market and most of the remaining have it as their number two. Canadian soldiers have sacrificed their lives right next to American soldiers in Afghanistan, the Persian Gulf, Kosovo, Korea, and both world wars. After September 11, the people of Gander, Newfoundland, opened their homes to thousands of travelers stranded when we closed US airspace. This heart-warming story is told in Come From Away, the hit Broadway show. We jointly protect North America through Norad and together protect Europe through Nato. Canada is our neighbor and friend, and our relationship demonstrates how diplomatic and economic friendship provides strong geopolitical stability.

We are family. Millions of Americans and Canadians are related to each other by blood or marriage. Thousands cross the border every day – visiting relatives, doing business, celebrating holidays.

There isn’t a relationship in the world more important to the United States than Canada, but Washington’s recent behavior is cause for alarm.

Trump has persistently tested this friendship over the past year and a half. The trouble started when we withdrew from the Paris climate accordand signaled to Canada that the administration was willing not only to sacrifice our commitments but also our environmental future for empty political points.

Our bilateral relationship has been further strained by the travel bans, the Daca decision (over which a dangerous and cruel wave of uncertainty still looms), and the erratic behavior of customs agents. Our reckless approach to immigration has caused a number of refugees to flee the United States to Canada, putting a strain on their resources from coast to coast, but especially in Quebec.

All of this means we shouldn’t be surprised now that Trump is implementing steel and aluminum tariffs and has threatened to walk away from Nafta. Once again, the president is prioritizing political tactics over economic strategy, threatening our friendship and potentially millions of American jobs just because he won’t do the hard work that the office of the presidency requires. The administration is using Nafta as a scapegoat for the real problem of jobs lost through technological advancements.

Nafta isn’t perfect, but it certainly can be reshaped to ensure it continues to create jobs and increase productivity and profitability. A thoughtful renegotiation would be ideal, but renegotiation needs a coherent strategy – a strategy that currently does not exist. Instead, he is using duties and tariffs to squeeze our Nafta partners so they succumb to his extreme demands.

Americans have not had an assessment from our government on the economic and geopolitical implications of implementing steel and aluminum tariffs, nor of leaving Nafta. With a highly integrated supply chain and our largest export market, the cost to us could be punishing. Canada hosts the G7 summit next weekend, and we can hope that coming together results in an opportunity to de-escalate the hostile rhetoric and behavior, and rather find a path of cooperation and economic prosperity. If not, our administration is playing a dangerous game with no idea of how it will impact the millions of Americans who rely on our relationship with Canada for jobs and economic prosperity.

Writer Bruce Heyman was ambassador of the United States to Canada between 2014 and 2017.