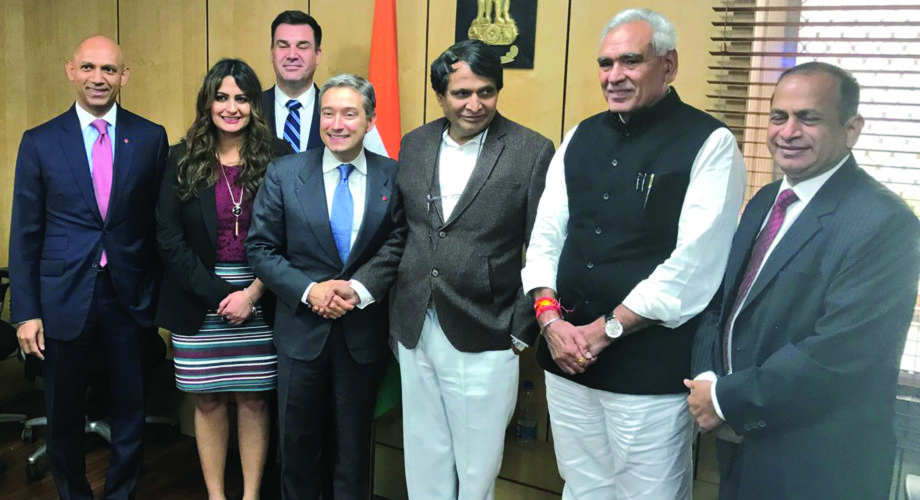 TORONTO – It has now been seven years since prime ministers Stephen Harper and Manmohan Singh announced the launch of bilateral free trade negotiations between Canada and India. The time has come for their successors to finish the job, and to do so within the next year.

India and Canada agreed on Nov. 13 to work towards an early conclusion of a proposed bilateral free trade agreement, with New Delhi highlighting the importance of services under such a deal.

The proposed Comprehensive Economic Partnership Agreement figured in the discussions between India’s Commerce Minister Suresh Prabhu and Canadian Minister for International Trade François-Philippe Champagne at the 4th India-Canada Ministerial Dialogue on Trade and Investment.
“Both sides noted the exchange of wish lists on the services front. India reiterated that the architecture for services under the CEPA is a vital focus area and a response from Canada on positive elements has to be mutually beneficial,” an official statement said.

François-Philippe Champagne, Innovation Minister Navdeep Bains and Transport Minister Marc Garneau are currently leading a trade mission to India, with stops in New Delhi, Mumbai, Pune, Hyderabad and Bangalore. The delegation is not only reaffirming Canada’s commitment to strengthening bilateral trade with these crucial Indian cities, it is also helping to prepare the ground for Mr. Trudeau’s long-awaited and much-anticipated state visit to India next year.

To get a sense of how long the Canada-India free-trade talks have been going on, Mr. Champagne is the fourth trade minister to oversee them, building on work started by Peter Van Loan and continued by Ed Fast and Chrystia Freeland. Now, in the eighth year of talks, there is reason for renewed optimism.
Economic modelling completed by the Canada-India Joint Study Group estimates the annual gross domestic product gains to Canada that could result from a bilateral trade deal are between $6-billion (U.S.) and $15-billion.

At a time when our trading relationship with the United States is being tested and the full impact of Britain’s exit from the European Union remains unclear, the upside of securing a free-trade deal with a vital market such as India is too big to ignore.
None of this is to suggest the challenges to be overcome aren’t significant. Concluding a trade deal with India will require both governments to invest the necessary time, effort, resources and political capital to secure a positive outcome.

For Canada, this means adopting many of the tactics we have used in the United States in support of the North American free-trade agreement renegotiations – such as leveraging support from the Canadian business community as well as all three levels of government.

The role of business leaders is vital, and they should be no less vocal about the importance of increased trade with India than they are about boosting trade with China or Japan. With storms clouds moving across the global trade landscape, imagine the competitive advantage Canada could secure if it had agreements in place giving it preferential access to India, China, Japan and South Korea, in addition to the one we already have with the EU (Comprehensive Economic and Trade Agreement).

Concluding a deal with India would not mean sidetracking talks with other countries. In fact, the opposite may well be true.
As CETA, the Trans-Pacific Partnership and NAFTA have shown, Canada has the expertise and experience needed to negotiate multiple complex trade agreements simultaneously. By making clear to its counterparties that Canada has other trading partner options in play, it could find itself in an even better position to secure the concessions from India needed to sign an agreement.

Of course, for any of this to happen, Canada must dedicate itself to the aggressive and ambitious goal of securing a free-trade agreement with India in the next year – because imposing a hard deadline is essential to focusing discussions and avoiding distractions.