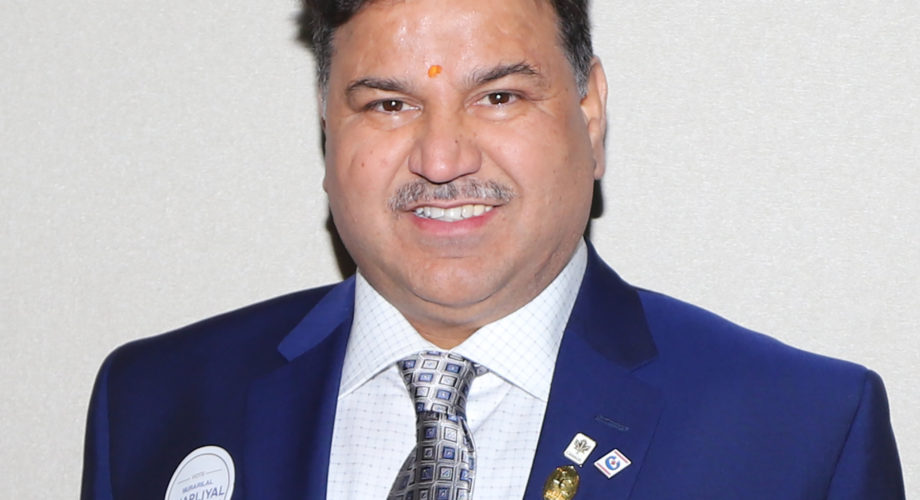 Touched by poor people with no means – a young lawyer in Mumbai in the 90s learnt how compassion can become a strong force in life. As he commuted daily to his office, the pain and agony of struggling masses on the sidewalk was hard to avoid.

“My mother told me if you want to be successful then help the poor and those who are mostly marginalized,” Murarilal Thapliyal reminiscences those early days which evoke noble thoughts and, in one instance, he jumped off his car to lend a helping hand to a struggling poor old man pulling a hand carriage.

15 Years later, life is great in Canada. The value system is still intact and the willingness to do good for people still edges him off the seat.

“I have seen it all, but I wonder how I get my kicks,” there is nothing like service to the community.

His personal struggles as new immigrant in Canada with wife and two young kids was overwhelming. On top of it was the lack of support for a new lawyer from established law firms. After few odd jobs and back to school, the hard work finally paid off. The Thapliyal and Rai Professional Law Corp was formed.

Such struggles are a constant reminder: “I got to do better. I will make sure my company will provide opportunities to those young students of law looking for articling. I don’t want others to face what I did,” says Thapliyal.

“My mantra is to serve the under-privileged, vulnerable seniors, abused women and at-risk youth. I have made a rule in our office that we dedicate few hours.”

Such award is a testament that the community has noticed a change agent and the people have opened their arms.

During the last decade, with new immigrants and the growth of new constructions and big businesses, the Thapliyal and Rai Professional Law Corp grew over the years. It built a strong team with most legal services under one roof. Today, they have been a leader in serving over thousands of clients in a year.

But all said and done, there is no service like public service.  And for Murarilal Thapliyal there can’t be a bigger pedestal. The love and support of the community was evident on the historic day of March 10, 2019 when he became official candidate for Conservative Party of Canada representing Brampton West.

“I can sense an honest man who has a loud voice for people and he is motivated,” said one voter on the nomination day. “The willingness to serve is something you cannot fake it.” Eventually, people waited endlessly when results were announced after 10 hours. The enthusiasm of over 200 volunteers was still palpable.

On Monday October 21, Murarilal Thapliyal faces a strong candidate in Kamal Khera who has been elevated to Parliamentary Secretary to International Development.

Murarilal Thapliyal thinks the horrors of current Liberal government are still fresh in the minds of Bramptonians. The reckless spending and large deficit with scandals of SNC Lavalin of Trudeau government are hard to erase from the minds of voters.

The riding has shrunk significantly with redistribution in the previous election cycle but the problems of people haven’t.

The riding has a diverse mix of people with children and a 60 per cent voting is expected. Employment, crime, transit, health, infrastructure are perennial issues and both candidates hope for a two way contest.

“I listen to people day after day and they are fed up with the current government laden with $20 billion deficit and counting, says Thapliyal.

Unlike France, the Carbon Tax imposed by Trudeau government has not met with massive violent street protests but it is burning inside people. Foreign relations disasters, trade disadvantages with USA and China and the surge of refugees are simply not adding up. Rising cost of living, and unemployment is rampant. Liberals are booted out of Ontario, Alberta and P.E.I. in the provincial elections. The blue wave is on and Liberals are continuously slipping in the polls.

“If the opportunity beckons, I am up to the task,” says Murarilal Thapliyal, who hopes to kick off public consultations through a new app “Voice of Brampton”.

The app strives to serve as a megaphone for people of Brampton West to air their concerns to the Parliament Hill.