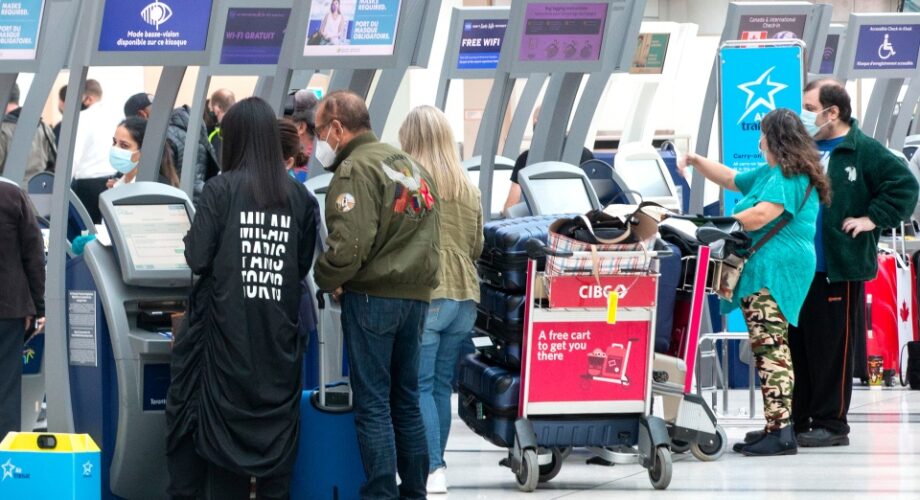 The new on-arrival COVID-19 testing and isolation requirements for all air travellers coming from outside of Canada other than from the United States could come into effect at any time, depending on the airport, according to Health Minister Jean-Yves Duclos.

Speaking to reporters on his way into the House of Commons, Duclos said that the directive to implement the new policy has been given, and now it’s up to each airport where international flights are landing to get the logistics in place.

“There are airports in Canada which can start doing that really quickly because they have excess capacity, other airports will take a bit more time,” he said.

On Tuesday the federal government announced that international travellers will soon be tested at the airport when they land in Canada, on top of the existing pre-departure test requirement.

Now, Duclos said that if an upon-arrival test is not possible, travellers would be given a take-home test.

“While they wait for that test to be known, they isolate themselves and when they get a negative test, they can exit out of the isolation,” he said.

While currently it takes an average of one day to receive test results, Duclos said that the “service standard” is three days and it could take longer to get results once this policy is fully operational, with the expectation being that officials will be conducting approximately 32,000 tests per day.

Rolling this out without a specific start date could result in some airports administering on-arrival tests before others, according to the minister.

“This is a significant change. We are increasing testing capacity by over 50 per cent, so depending on local circumstances, that could take longer than what has been seen in the recent weeks,” Duclos said.

Heading into a caucus meeting Wednesday morning, Prime Minister Justin Trudeau said in French that the government was aiming to implement the policy soon as it’s possible, given the ramping up of testing capacity needed at all airports currently accepting international travellers. He suggested it could be within the days or week to come.

UNDECIDED ON INCLUDING U.S.

Uncertainty remains over whether the policy will be expanded to include those coming from the United States.

Transport Minister Omar Alghabra said that while talks have begun with provinces over the newly-announced Omicron-prompted travel measures, no decisions have been made yet as to whether the policy will fold in American travellers, but the government is ready to if required.

The United States confirmed its first case of the Omicron variant on Wednesday, in a returning traveller who was fully vaccinated. Canada currently has seven confirmed cases across four provinces, all found in folks who had recently travelled to Nigeria.

Ontario Premier Doug Ford has voiced his support for the new slate of border measures, and said that all options remain on the table when it comes to expanding the restrictions.

While Council of Canadian Airports has praised the speed of the government’s decision to impose new Omicron-prompted restrictions, chairman Daniel-Robert Gooch is raising concerns over the feasibility of testing nearly everyone who is arriving from abroad given the current rates of travel happening.

“The only operationally-feasible way to test 100 per cent of international arriving travellers — from all countries except the U.S. — is to provide off-site tests, such as those that travellers can take at their home or other point of self-isolation,” he said in a statement. “We urge the Government of Canada to work with Canada’s airports and air carriers in the coming hours to ensure these measures, which haven’t been seen in detail, are operationally feasible.”

Asked whether staff at airports will be able to handle the widespread new testing order given the coming holiday travel season, Public Safety Minister Marco Mendicino said the government will “spare no expense.”

“We’ll make sure that our airports, our frontline officers can handle the volume,” Mendicino said.

This on-arrival testing policy is separate from more comprehensive restrictions that are currently in place for travellers who have recently travelled to 10 African countries: Nigeria, Malawi, Egypt, South Africa, Mozambique, Namibia, Zimbabwe, Botswana, Lesotho and Eswatini.