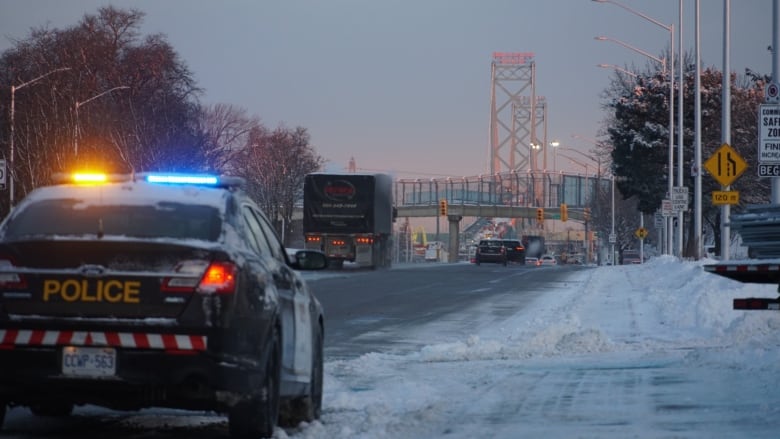 The flow of traffic returns to Huron Church Road in Windsor, Ont., Monday. The throughway feeds traffic to the Ambassador Bridge connecting Windsor-Detroit. Protesters were cleared from the road by police on Sunday.

Traffic once again started flowing across the Ambassador Bridge on Monday after a six-day protest shuttered the international crossing between Windsor, Ont., and Detroit.

Shortly after midnight, the Canada Border Services Agency (CBSA) announced “normal operations” had resumed at one of the busiest border crossings in the country.

Protesters against pandemic restrictions had blocked the main exit and entrance of the bridge for nearly a week. Police cleared the protesters and vehicles were towed away on Sunday.

“I want to thank the unified coalition of business leaders and organizations representing working men and women on both sides of the border for coming together to get this resolved,” Michigan Gov. Gretchen Whitmer said in a news release Monday.

“And I appreciate the U.S. and Canadian governments for hearing Michigan’s concerns loud and clear and stepping up to reopen the bridge.”

A heavy police presence remained in the area along Huron Church Road on Monday — the main corridor for traffic to the bridge — to ensure protesters do not return to block the roadway.

“There may be a cat-and-mouse situation for a little while,” Windsor police Chief Pam Mizuno told reporters Sunday.

Mizuno said police are prepared to deal with any further attempts to block the area. About 25 to 30 people were arrested and charged with mischief Sunday as police cleared the protesters.

Access to intersections along Huron Church Road is being limited Monday, presumably to ensure protesters cannot enter the area.

“You have families that work for the Big 3 [automakers], many of them in Windsor, sent home.… So there’s an impact and a ripple throughout the entire community. But I’m happy today the bridge is open and police are in control,” Dilkens told CBC’s Windsor Morning.

“This is a crucial piece of infrastructure that is the Ambassador Bridge and we’ve got to do all we can to keep that road open until this so-called Freedom Convoy is sorted out.”

On Friday, police handed out flyers to protesters, informing them of a provincewide state of emergency declared by Premier Doug Ford due to a number of protests in Ontario. Later that afternoon, an Ontario Superior Court judge granted an injunction barring protesters from blocking traffic to the Ambassador Bridge.

By Friday night, groups of protesters went to the bridge area. Police continued to patrol the area into Sunday morning, when a final push to move demonstrators out began.

Protesters slowly packed up belongings, and moved cars and trucks parked along the road blocking access to the bridge.

Windsor’s mayor said the city will “seek every penny that we’ve incurred” from upper levels of government for the costs associated with the policing.

Compensation for business owners and others implicated by the blockade at the bridge is something provincial Opposition NDP Leader Andrea Horwath called for while visiting Windsor on Monday.

“[Premier] Doug Ford can actually do that, he can actually help to address the fact that everyday people here in Windsor, Ont., and southern Ontario really paid the price for that blockade,” she said during a media briefing.