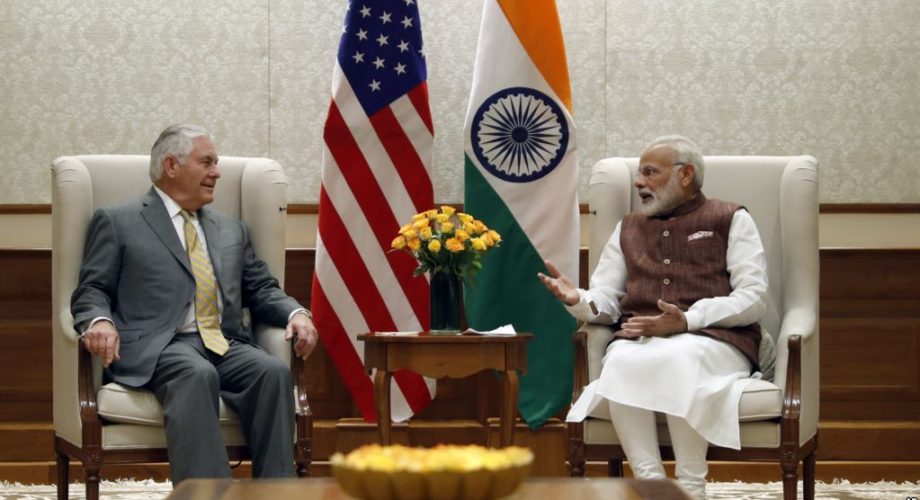 The United States pledged its commitment to deepening strategic ties with India as U.S. Secretary of State Rex Tillerson met Indian leaders, including Prime Minister Narendra Modi, in New Delhi during a visit that highlighted their strong emerging alliance.

Combating terrorism and expanding India’s role in helping Afghanistan’s development were key issues discussed by Indian foreign minister Sushma Swaraj and Tillerson, who arrived in the capital city after stops in Kabul and Islamabad.

At a news conference after the talks, Tillerson extended an assurance that “in the fight against terrorism, the United States will continue to stand shoulder to shoulder with India. Terrorist safe havens will not be tolerated.” 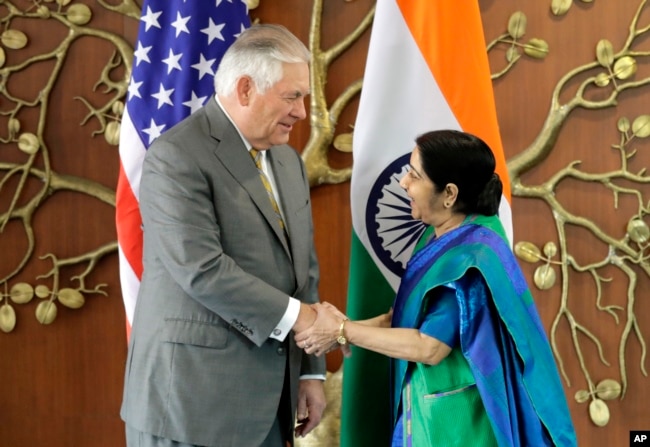 The top U.S. diplomat visited the region after the Trump administration unveiled a new South Asia strategy calling on India to play a larger role in Afghanistan’s economic stabilization and on Pakistan to take more action against militant groups based in the country.

Indian foreign minister Swaraj said President Donald Trump’s new strategy for the region “can only be successful if Pakistan acts decisively against all terror groups without any discrimination.” New Delhi has long blamed Islamabad for supporting insurgent groups that carry out terror acts in India. 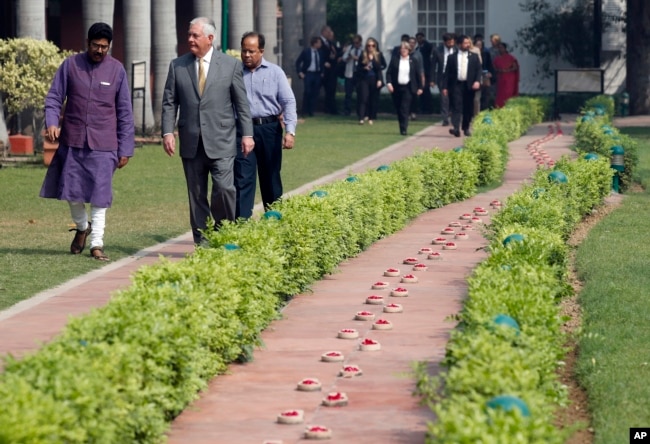 U.S. Secretary of State Rex Tillerson walks along side the path of the last steps of Mahatma Gandhi to the Martyr’s Column, the site of the assassination Mahatma Gandhi, with director Dipankar Gyan, at the Gandhi Smriti, Oct. 25, 2017, in New Delhi, India.

Tillerson expressed concern that extremist groups could threaten the security of Pakistan.

“Quite frankly, my view, and I expressed this to the leadership of Pakistan, is we also are concerned about the stability and security of Pakistan’s government, as well as these terrorist organizations have enlarged their numbers, enlarged their strength and their capability,” he told reporters. “This could lead to a threat to Pakistan’s own stability. It is not in anyone’s interests that the government of Pakistan be destabilized.”

Gopalaswami Parthasarthy, a longtime Indian diplomat and India’s Former High Commissioner to Pakistan, observed, “The Americans now are not going to accept excuses about the support Taliban receives from Pakistani territory. However much Pakistan may deny it, it is known that Taliban gets safe haven, and are armed and trained with the assistance of Pakistan’s Inter Service Intelligence — that cuts no ice with anybody. What Mr. Tillerson is effectively saying is that, ‘you better get your act together or there will be consequences.'” 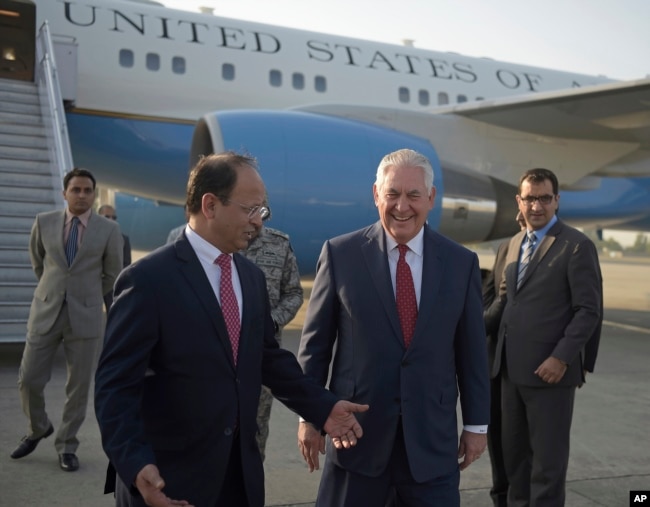 Tillerson, who last week said that he sees India as a key partner in the face of what he considers negative Chinese influence in Asia, reiterated that India could play a wider role in the region. Analysts say Washington’s overtures for closer ties with India are prompted by the need to counter China’s rise.

Tillerson told reporters “the United States supports India’s emergence as a leading power and will continue to contribute to Indian capabilities to provide security throughout the region.” He said Washington was willing to provide New Delhi with advanced technologies for its military modernization.

“We also look forward to further cooperation in the broader Indo Pacific region as we both promote a rules-based approach to commerce, and a transparent and sustainable approach to economic development,” he said.

While underlining that the gains of a closer relationship with the U.S. can be substantial, foreign policy analysts in New Delhi also have urged some caution. India’s former foreign secretary Kanwal Sibal said in the Economic Times, “the difficult task is finding the right balance between protecting its [India’s] own interests, and cooperating in advancing those of the U.S. under Trump’s unpredictable stewardship.”

Tillerson is on a multi-nation tour of the Middle East and South Asia. It also included an unannounced trip to Iraq.