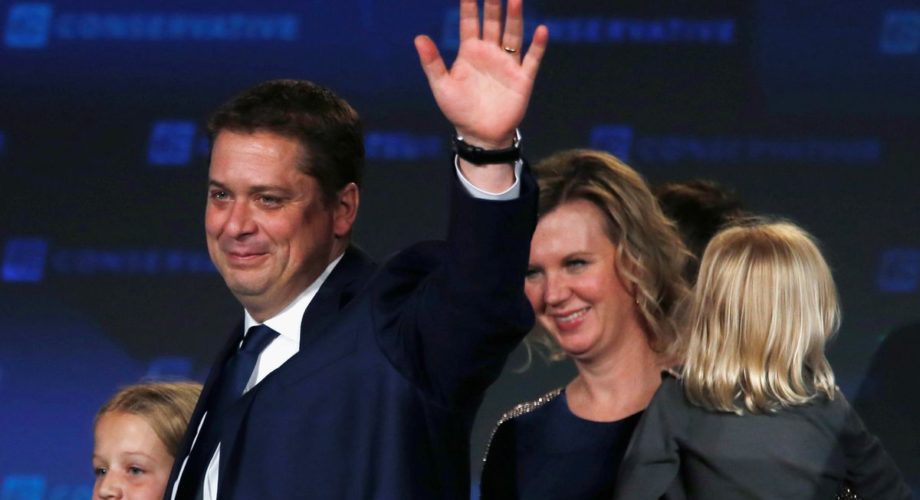 Conservative leader Andrew Scheer waves with wife Jill and children as he addresses supporters after losing to Justin Trudeau in the federal election in Regina, Saskatchewan, Canada October 21, 2019.

Conservative Leader Andrew Scheer said today he has no plans to resign, and vowed instead to stay at the helm of his party and take another swing at defeating Prime Minister Justin Trudeau in the next election.

Speaking to reporters in Regina this morning, Scheer said he had hoped for better results but is happy with the “significant gains” the Conservatives achieved in this election.

“We point to the fact that we won the popular vote, a million more votes for our party last night than than ever before, and that we have the strongest opposition in Canadian history,” Scheer said. “More people voted for me and the Conservative platform than any other party.”

“This was the first step in a process to replace Justin Trudeau’s government … we’ll take the next few days to prepare the ground work for the next campaign. We’ll continue to prepare and fight for when the government falls,” Scheer said.

Scheer managed to bolster his party’s popular support thanks in part to lopsided victories in Alberta and Saskatchewan, where the party achieved record results.

Despite a promising start to the campaign in Quebec, the Conservatives actually lost seats in that province.

The party emerged as a starkly more regional entity, with its support largely concentrated in Western Canada. There, the party’s base turned out in record numbers, thanks in part to hugely unpopular Liberal policies that are seen as constituting an attack on the country’s oil and gas sector.

While Scheer promised to stay on as leader, the choice ultimately rests with the Conservative Party membership.

Under the party’s constitution, if it fails to form a government — and if the leader has not yet formally signalled an intention to resign — then delegates can vote at the next party convention to hold a leadership race.

The party launches a leadership race if more than 50 per cent of members at the party convention vote in favour of one. The next Conservative convention happens in 2020.

The Conservatives faltered in the rest of the country, failing to make significant inroads in Atlantic Canada, Quebec or Ontario.

Compared to 2011, when the Conservatives won a convincing majority government, the party achieved lower popular vote support levels in every province except Alberta and Saskatchewan.

In once solidly blue ridings like Central Nova and South Shore-St. Margaret’s in Nova Scotia, and Milton in Ontario, the Liberal candidates easily bested their Tory opponents.