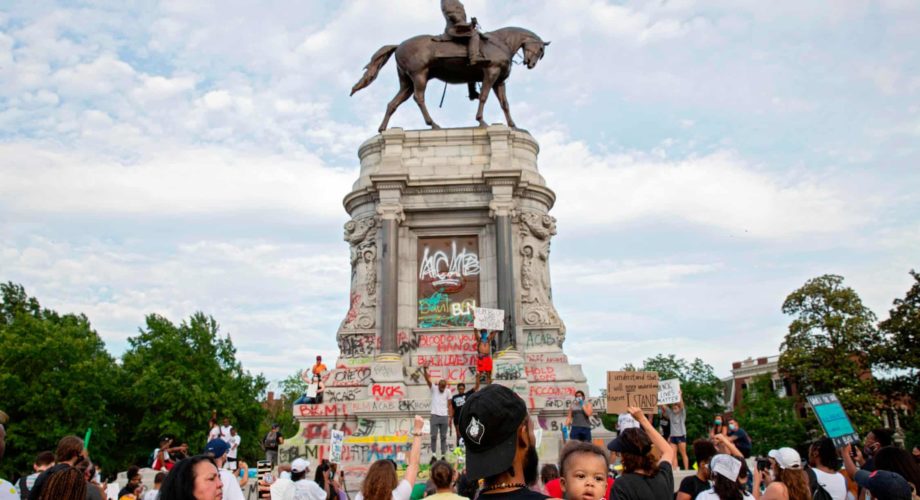 Protesters around the Robert E Lee statue on Monument Avenue in Richmond, Virginia. Richmond’s mayor has said the statue will be removed this month.

Last week in Richmond, Virginia, protesters scrawled on a monument of the Confederate army commander Robert E Lee as an act of resistance against police brutality and racism. They wrote “Black Lives Matter”, “Blood On Your Hands” and “Stop White Supremacy” in spray paint, often in red.

At night, there was a projection of George Floyd’s face, bearing the words “No Justice, No Peace”.

This 12-ton monument of Lee, which has sat on Monument Avenue for 130 years, now looks like the Berlin Wall in 1989 – covered in messages, the voice of the people. The renewed outrage over its existence, in the wake of the killings of George Floyd, Breonna Taylor and Ahmaud Arbery, has led to its imminent removal.

Richmond’s mayor, Levar Stoney, has agreed to take down the Lee statue, and other city-controlled Confederate monuments, by 1 July. “Richmond is no longer the capital of the Confederacy,” Stoney said in a statement. “It is filled with diversity and love for all, and we need to demonstrate that.”

Although a number of Confederate monuments across America were torn down in 2017 after a white nationalist rally in Charlottesville, many still remained.

But a bigger tide appears to be turning.

In Fredericksburg, also in Virginia, a slave auction block from a downtown street corner was removed on Friday, while a statue of the former Philadelphia mayor Frank Rizzo, a segregationist and former police chief, was also taken down.

“The fact that these are coming down … to be honest, I never thought I was going to see this in my lifetime,” said Sarah Beetham, an art history professor at the Pennsylvania Academy of the Fine Arts. “It’s a big turning point, so we will probably see the acceleration of monuments being taken down, much faster.”Advertisement

“It’s a drop in the bucket in terms of how many there still are. I’m talking statuary statues, which people are getting riled up about,” said Karen L Cox, a historian on Confederate monuments.

“There are going to be places where it’s not going to happen, like in Mississippi, where not one has been taken down. In Louisiana, it’s only in New Orleans,” added Cox. This map of Confederate monuments across the country shows the remaining number of Confederate markers.

“This is mostly happening in urban areas, which tends to be a more progressive population, even in the south.”

Relocating the monuments from public areas to cemeteries could also happen. One organization, Project Say Something, is working towards removing a Confederate monument from the Lauderdale county courthouse in Florence, Alabama, to the Florence city cemetery, for example (a similar protocol to the J Marion Sims statue that was removed from New York’s Central Park in 2018).

“When the statues are on court lawns or statehouse lawns where laws are made, it sends a message that you will not get justice in these places,” said Cox.

The mayor of Athens, Georgia, has called to remove a Confederate memorial on Broad Street, while one online petition calls for the removal of four Confederate statues in the state – including one of John B Gordon, a leader with the Ku Klux Klan. (One Confederate monument in Tuskegee, Alabama, was recently defaced with “Fuck the KKK”.)

Locals are fighting to get a 30ft Confederate obelisk removed from Decatur, Georgia, while a monument honoring Confederate soldiers in Indianapolis, will be removed, the mayor announced last week.

“Our streets are filled with voices of anger and anguish, testament to centuries of racism directed at black Americans,” the Indianapolis mayor, Joe Hogsett, said in a statement. “We must name these instances of discrimination and never forget our past – but we should not honor them.”

Many pedestals could be left empty, (if not removed altogether), making space for a new kind of monument. Last year, the National Memorial for Peace and Justice opened in Montgomery, Alabama, paying tribute to the lives lost from racial lynchings between 1877 and 1950.

In New York, a monument honoring the first African American congresswoman Shirley Chisholm will be erected this year, while Kehinde Wiley’s “Rumors of War” sculpture, depicting a black man seated on a horse, has been a destination for protesters in Richmond. Wiley has said this public artwork is inspired by violence, and “attempts to use the language of equestrian portraiture to both embrace and subsume the fetishization of state violence”.

In Florence, Project Say Something is planning to create a social justice monument. And recently, a fence outside the White House in Washington has become a makeshift memorial wall, covered in tributes to the black men and women who have died from police brutality.

Beetham said: “When something is disrupted and monuments are vandalized, that triggers something in us – we realize something is wrong. It shows we have dismantled something. The space should be given to artists who really deserve it.”