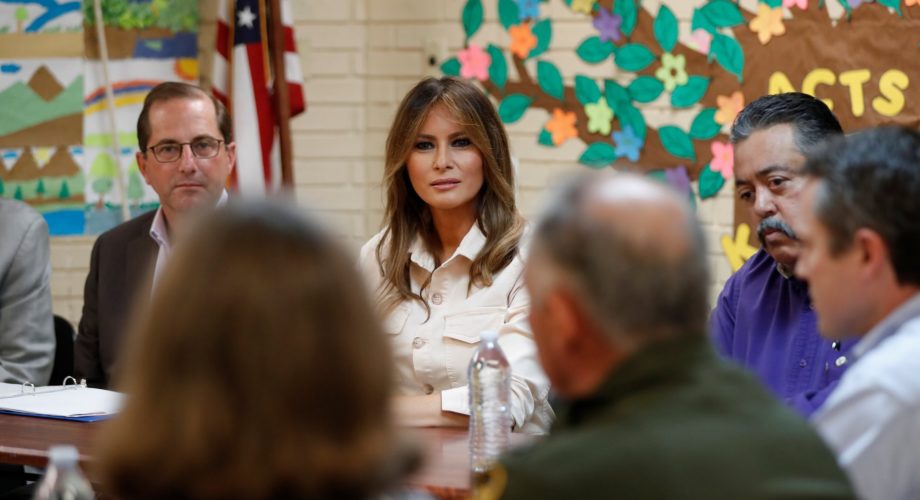 Melania Trump has made an unannounced visit to the US-Mexico border a day after the president retreated on immigration policy and signed an executive order to end his policy of family separations amid enormous political pressure.

The first lady was taking part in briefings and attending a tour of a “nonprofit social services center for children who have entered the United States illegally and a customs and border patrol processing center”, according to a statement from her office.

Trump’s visit began with a tour of New Hope Children’s Shelter, a nonprofit center in McAllen, Texas, that houses roughly 60 children, mostly teenagers who have traveled from Central America.

“Thank you so much for having me today. I’m glad I’m here and looking forward to meeting the children,” Trump said, sitting at a table with the health and human services secretary, Alex Azar, at a center in McAllen, Texas.

“I’d also like to ask you how I can help reunite these children with their families as quickly as possible,” she added.

Thousands of children have been separated from their parents in recent weeks as a direct result of the Trump administration’s “zero tolerance” policy on unlawful border crossings. The authorities have been arresting, prosecuting and jailing adults while putting their children in separate detention camps.

“Her goals are to thank law enforcement and social services providers for their hard work, lend support and hear more on how the administration can build upon the already existing efforts to reunite children with their families,” the statement said.

While Donald Trump’s order halts separations, his administration has not said how it plans to reunite the more than 2,300 children who were taken from their parents at the border in recent weeks.

The US president has said the first lady and his eldest daughter and advisor, Ivanka, influenced his decision to sign the executive order.

The executive order directs government officials to continue its “zero-tolerance” enforcement policy of criminal prosecution for every immigrant who crosses the border illegally, but says that officials will seek to “maintain family unity” by detaining parents and children together instead of separating them while their legal cases wind through a severely backlogged immigration court system.

In compliance with the order, the Department of Justice on Thursday asked a federal judge to change the legal constraints regarding the treatment of immigrant families who enter the country illegally. The filing sought permission to detain children for longer than 20 days so that they can remain with their parents.

During her tour, Melania Trump sat smiling and chatting with officials in an immaculately clean room, where the walls behind the group were covered in neat, colorful children’s paintings, collages and pictures of hearts and flowers.

Before departing, Trump was captured by photographers boarding a plane wearing a green military jacket with the a message on the back that read: “I really don’t care. Do u?”

Meanwhile, an hour away, at the federal courthouse in Brownsville on Thursday morning, there was little sign of the president’s executive order taking effect.

At a mass plea hearing involving 43 migrants, lawyers for the defendants informed the court that one 18 year-old Honduran defendant, Jenifer Johana Fuentes-Maradiaga, had been separated from her 14 year-old brother.

Lawyers for the government confirmed they did not know his whereabouts, so Judge Ignacio Torteya III postponed her sentencing until the afternoon.

Rudy Rodriguez, a public defender representing Fuentes-Maradiaga, told the Guardian his client was “worried, concerned and obviously emotional” about being separated from her younger sibling, and confirmed the two had travelled from Honduras alone.

The pair had been separated two days ago, Rodriguez confirmed, adding that it was within the government’s power to exercise prosecutorial discretion for separated family members.

In Washington on Thursday, Trump did not confirm whether he was going to continue to prosecute migrants as criminals after they are caught crossing the border without authorization.

Instead, Republican leaders planned to hold the vote on Friday in an effort to wrangle last-minute support for the measure, according to a senior Republican aide. Earlier on Thursday, Trump mused on Twitter: “What is the purpose of the House doing good immigration bills when you need 9 votes by Democrats in the Senate, and the Dems are only looking to Obstruct (which they feel is good for them in the Mid-Terms)?”

Trump’s morning tweet was the latest wrinkle in a delicate negotiation process that sought to address two urgent immigration crises triggered by Trump’s hardline immigration agenda. The first was his cancellation of a program that shielded hundreds of thousands of young undocumented immigrants known as Dreamers from deportation, leaving their fates in limbo. The second was his administration’s zero-tolerance policy which led to the separation of more than 2,300 thousand children from their parents.

The measure, crafted to be a compromise between Republican conservatives and moderates, would provide $25bn for Trump’s border wall, and impose new restrictions on legal immigration while offering a narrow pathway to citizenship for young undocumented immigrants known as Dreamers and language they say would end family separation.

Ahead of the vote, Mark Meadows, the chairman of the House Freedom Caucus, said the measure still did not have enough support to pass. He urged leadership to postpone the vote so that they could iron out final outstanding agreements.