A man walks on the boardwalk at Woodbine Beach early Monday as the morning sun rises in the sky. Toronto is under a special weather statement with the mercury forecast to reach the low thirties.

Toronto is under a special weather statement with the mercury forecast to reach the low thirties.

The city is bracing on Monday for what Environment Canada is calling “first heat event of the season.” Residents are being urged to take care of themselves and keep an eye out for people and pets left in hot cars.

Sunshine is forecast for the morning, followed by a mix of sun and clouds in the afternoon. Monday’s high temperature is forecast to be 32 C, with a humidex of 37.  The federal weather agency says a warm and humid air mass that is expected to move into Southern Ontario will bring the first heat event to Toronto and to parts of Southwestern Ontario and the Golden Horseshoe Area on Monday and Monday night. 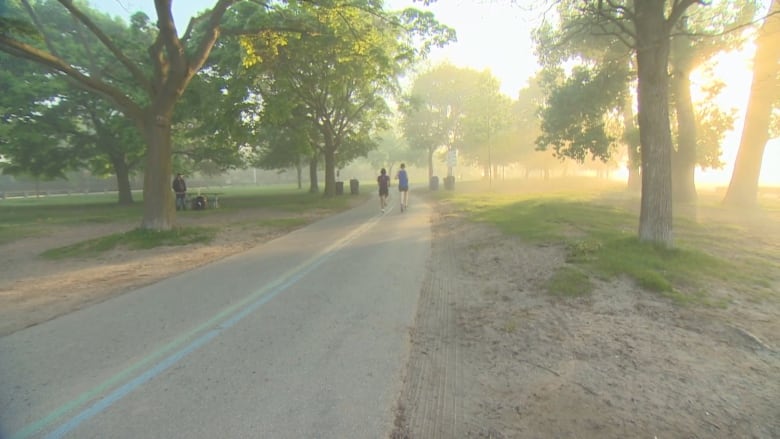 Joggers enjoy the coolness of the morning at Woodbine Beach on Monday.

“These conditions pose a health risk when you are not use to the heat,” Environment Canada says in the statement.

“Everyone is at risk from heat, especially older adults; infants and young children; and people with chronic illnesses.”

As for motorists, Sgt. Kerry Schmidt, spokesperson for the Ontario Provincial Police’s Highway Safety Division says it’s important to remember that heat can be “deadly.”

It’s going to be a hot, hot day and Toronto residents are urged to take care of themselves as the mercury climbs.

Schmidt is urging drivers not to leave children or pets in hot cars.

If someone sees an adult, child or pet in a unattended vehicle and in distress, he said that person should call 911 immediately and get into the vehicle.

“If that involves having to break a window, that may be what you need to do to save a life,” he said.

Schmidt said parking in the shade or leaving a window open a crack doesn’t make much of a difference because the temperature in a vehicle will still climb quickly on a hot day.

“No hot cars, that’s the bottom line,” he said.

A boy, believed to be three years old, died on May 23rd in Burlington, Ont. after he was apparently left in an overheated car.

According to Halton Regional Police, an autopsy the following day found that the preliminary cause of death was hyperthermia.

That finding is “consistent with the child being left in a vehicle and exposed to high temperatures for an extended period of time,” police said.

No charges have been laid in the death.