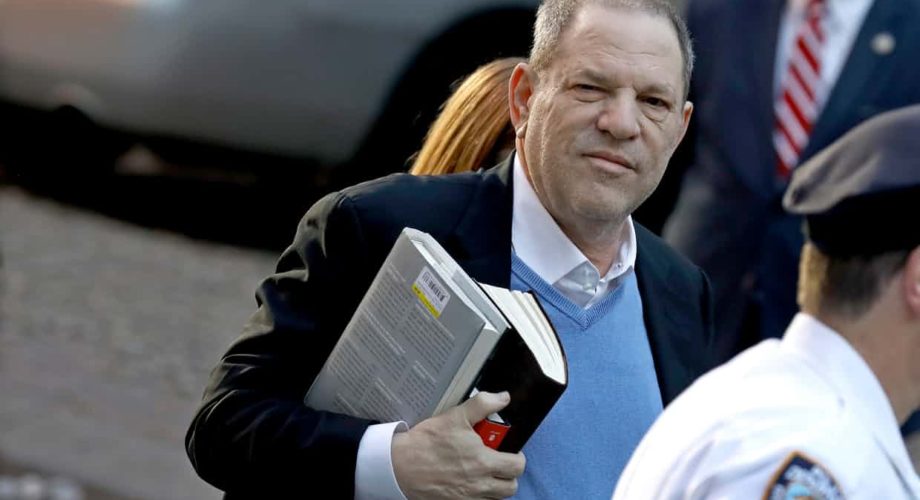 Harvey Weinstein arrives at a New York City police department precinct to turn himself in to face multiple charges related to allegations of sexual assault.

During a brief court appearance on Friday, Weinstein remained quiet as his lawyers agreed he would post $1m (£750,000) bail and wear an electronic monitoring device. He also surrendered his passport, and agreed not travel beyond New York and Connecticut.

A prosecutor told the judge that the investigation is ongoing, and that authorities have encouraged other survivors to come forward.

“The defendant used his position, money and power to lure young women into situations where he was able to violate them sexually,” she said.

It is the first criminal case to be brought against Weinstein since the revelations about him erupted last October and sparked the #MeToo movement.

Weinstein, 66, was led in handcuffs, with a detective on either side holding his arms, from the police station into a waiting car. A few minutes later he arrived at criminal court in Manhattan, to be arraigned on the charges . He has denied all allegations of non-consensual sex.

By the time Weinstein walked from the car into court he was no longer in handcuffs, though was marched into the court building with officers on either side, interlocking their arms with his. Walking behind Weinstein was his attorney Benjamin Brafman, whose most recent high-profile case saw pharmaceutical entrepreneur Martin Shkreli imprisoned for fraud earlier this year.

Weinstein was stone-faced and sullen, and did not respond to requests for comment from the gaggle of reporters.

It was a quieter scene than the nearby NYPD first precinct, where Weinstein surrendered in the early morning, which attracted throngs of onlookers and press.

A statement from the New York police department said: “The NYPD thanks these brave survivors for their courage to come forward and seek justice.”

He stepped from a black SUV wearing a dark jacket over a light blue sweater and white open-necked shirt. He was carrying three books under his arm. He went into the police station before a crowd of news cameras. He didn’t respond to shouts of “Harvey!”

Two law enforcement officials told the Associated Press the case will include allegations by Lucia Evans, an aspiring actor who has said the Hollywood mogul forced her to perform oral sex on him in his office. She was among the first women to speak out about the producer.

One official said it was likely the case also will include at least one other victim who has not come forward publicly.

Brafman said on Thursday he would not comment. Previously Brafman said in court paperwork that the Weinstein allegations were “entirely without merit” and that he never knowingly broke the law.

Evans told the New Yorker in a story published in October that Weinstein forced her to perform oral sex during a daytime meeting at his New York office in 2004, the summer before her senior year at Middlebury College.

Manhattan district attorney Cyrus Vance had been under enormous public pressure to bring a criminal case against Weinstein. Some women’s groups, including the Hollywood activist group Time’s Up, accused Vance, a Democrat, of being too deferential to Weinstein and too dismissive of his accusers.

A grand jury has been hearing evidence in the case for weeks.

In March, Andrew Cuomo, the New York governor, took the extraordinary step of ordering the state’s attorney general to investigate whether Vance acted properly in 2015 when he decided not to prosecute Weinstein over a previous allegation of unwanted groping, made by an Italian model. That investigation is in its preliminary stages.

The statute of limitations for rape and certain other sex crimes in New York was eliminated in 2006, but not for attacks that happened prior to 2001.

New York City police detectives said in early November that they were investigating allegations by another accuser, Boardwalk Empire star Paz de la Huerta, who told police in October that Weinstein raped her twice in 2010. She is not one of the victims in the case on Friday; hers was still pending, officials said.

Authorities in California and London also are investigating assault allegations. Britain has no statute of limits on rape cases; some of the allegations under investigation there date to the 1980s.

Two of the books Weinstein carried into the police station have been identified as Something Wonderful: Rodgers and Hammerstein’s Broadway Revolution by Todd S Purdum, and Elia Kazan: A Biography by Richard Schickel.

Something Wonderful was published last month. Weinstein might see something of himself in the story of successful showmen impresarios credited with changing the cultural landscape.

There are also possible parallels in the story of Elia Kazan, the immigrant director of groundbreaking, multi-award-winning classics such as On the Waterfront and A Streetcar Named Desire. Originally a communist, Kazan was later scorned by much of liberal Hollywood for testifying before the House Committee on Un-American Activities in 1952. When Kazan was awarded an honorary Oscar in 1999, dozens of audience members chose not to applaud and 250 demonstrators picketed the event.

Schickel’s 2005 biography also documents Kazan’s many affairs. Three times married, he had affairs with many female actors and leading ladies including Marilyn Monroe. Yet Kazan’s reputation as a formidable Hollywood artist weathered political and personal scandals.