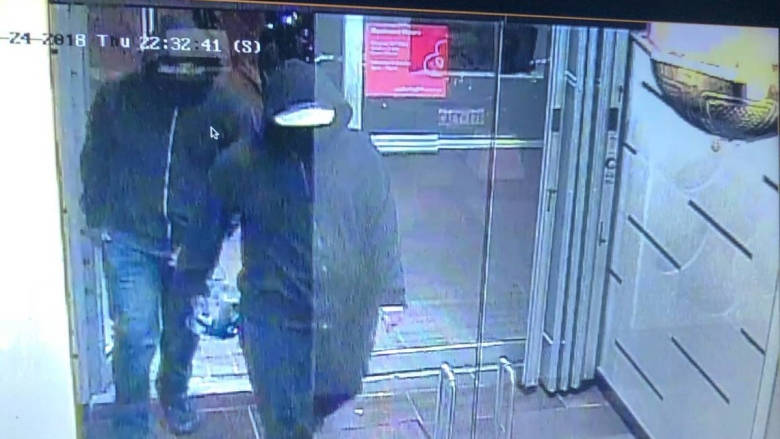 Police are searching for two men caught on security camera who fled the scene immediately after an explosion at a restaurant in Mississauga, Ont., on Thursday.

Police are searching for two men in connection with an improvised explosive device (IED) blast inside a restaurant in Mississauga, Ont., that wounded 15 people.

Three people who suffered critical injuries in the Thursday blast were rushed to a Toronto trauma centre. They were listed in stable condition on Friday. 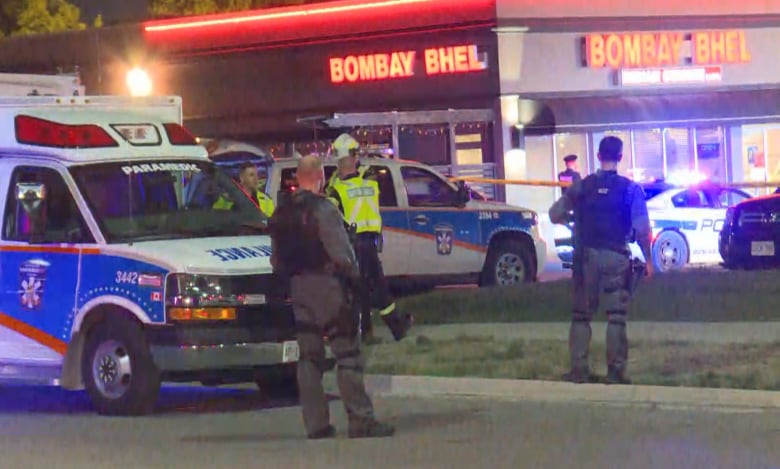 Peel Region paramedics took 15 patients to hospital after the blast.

Other victims, who range in age from 23 to 69 years, have been treated and released. Evans said the victims were taken to three hospitals.

According to police, two males with their faces covered to conceal their identities entered the Bombay Bhel restaurant, at 5035 Hurontario St., dropped an IED and fled. Police believe the two fled in a vehicle.

Police received a call about an explosion at about 10:30 p.m. ET.

Evans said Peel police have notified police in Toronto, York, Durham and Halton Regions as well as the Ontario Provincial Police and the RCMP as they search for two suspects.

She said two separate, private parties were occurring in the restaurant. Children under age 10 were at the parties, but not injured. 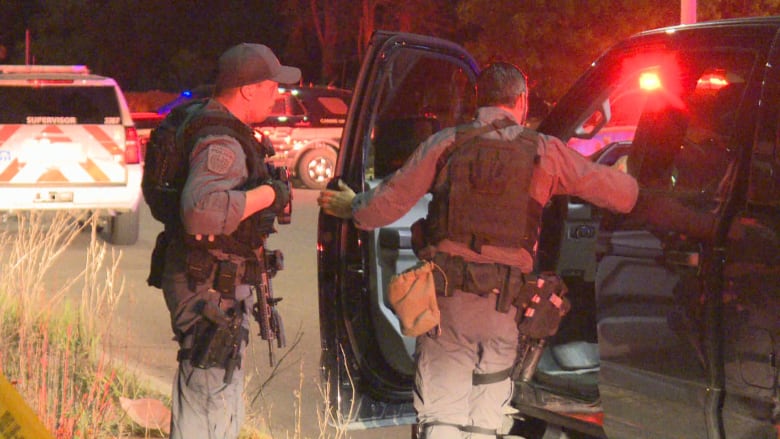 Emergency responders were called to the scene around 10:30 p.m. Thursday.

Evans said it’s too early to say if the blast in the area of Hurontario Street and Eglinton Avenue East was terror related.

‘No indication that this is a terrorist act’

Officers are interviewing witnesses and victims and collecting evidence at the scene. People who left the restaurant are urged to call Peel police.

The restaurant was evacuated after the incident and is now locked down as police investigate, she said. It will be hours before the plaza, where it is located, is reopened.

Evans said there was a “considerable amount” of damage to the restaurant. She could not say where exactly inside the blast occurred.

“Please understand that this investigation is in its early stages and we are doing our best to share what information as it becomes available.”

Three people were in critical condition Friday, while the remaining 12 have minor injuries.

“My thoughts and prayers are with the victims. I’m thankful that there were no fatalities.

“This is certainly not anything you would expect to happen in Mississauga, not my Mississauga. This is not the Mississauga I know.”

Crombie said it was a “heinous” crime.

“Certainly, the people who have done this need to answer for their crimes and need to be brought to justice.”

Police are describing one suspect as:

The second male is:

Police have tweeted a security camera photo of the suspects.

“It appears they just went in, dropped off this device and took off right away.”

Bertram said the type of device used isn’t yet known.

“Until we can get in there and analyze the material after the search warrant, we won’t be able to say what it was.”

On Thursday night, tactical teams could be seen outside the restaurant as patients were loaded into ambulances. Police said they were there as a part of a “multi-unit” response, but would not say if there is any threat to public safety.

Police could not say how many people were inside at the time.

‘It was really loud’

“We transported three of them to trauma centres in what I would say is critical condition just from blast injuries.”

Korstanje said the remaining 12 victims suffered minor and superficial injuries. Rafael Concaceicao, a student from Sao Paulo, Brazil, was on the patio of a restaurant close to Bombay Bhel when he heard the explosion and rushed to help.

“Glass was broken in the street. There was a child’s birthday party,” he said.

“Everything was destroyed. Lots of blood in the floor. Many people were screaming. They were trying to run out from the restaurant. There was a guy with glass inside his eyes. Many people were bleeding so much.”

Andre Larrivee, who lives in a nearby condo, said he was watching television and heard a loud explosion.

“It was really loud,” he said.

Other people who were shopping in neighbouring stores — and waiting for their vehicles to be released from behind the police tape — also reported hearing a loud explosion.

India’s Minister of External Affairs Sushma Swaraj said in a tweet that consular support was available.

The Consulate General of India in Toronto has also set up a helpline.